All the atmospheric entry missions endure a communication blackout. What parameters except plasma penetration frequency affect the blackout time and how ?

Also, Comm Blackout states that space shuttle's shape created a hole on the rear side to allow relay communication through TDRSS. That raises a doubt if such holes could be as well be incorporated in modules say, Orion to maintain communication all the time when missions go real and there are humans inside.

Blackout duration on Earth is dependent on the angle of re-entry, the more horizontal the re-entry, the longer the blackout, because of the longer time for speed to exit the plasma creation conditions. See A rough estimate of the 'blackout' time in re-entry communications (1962).

This has been visible for Apollo 13 re-entry:

According to the mission log maintained by Gene Kranz, the Apollo 13 re-entry blackout lasted around 6 minutes [...], and was 1 minute 27 seconds longer than had been predicted.

Blackout is a negative side-effect of a design choice: The re-entering spacecraft is decelerated using the atmosphere passive resistance, rather than other means, because this is the cheapest method.

Being a capsule-shaped vehicle, Orion experiments a re-entry blackout, though limited, less than 2:30 mn for first flight test:

At 16:18 UTC, Orion slammed into the atmosphere, starting to slow down from 32,000 Kilometers per hour. Plasma started building up around the vehicle, causing a two and a half minute blackout in communications.

Re-entry blackout is still a problem for capsule-shaped vehicles, both manned and unmanned. The Genesis mission samples have been lost because the control center had no mean to force the deployment of the parachute, due to communication blackout, after the inboard sensor didn't trigger the automated sequence properly.

The most beautiful solution to the re-entry blackout could be using the plasma layer as an antenna. A team of scientists stated having found a way to do this: Communication through plasma sheaths - Korotkevich, Newell, Zakharov.

We wish to transmit messages to and from a hypersonic vehicle around which a plasma heath has formed. For long distance transmission, the signal carrying these messages must be necessarily low frequency, typically 2 GHz, to which the plasma sheath is opaque. The idea is to use the plasma properties to make the plasma sheath appear transparent.

Looks good on the paper, now needs to be experimented.

Other solutions: Besides using the natural plasma-free tunnel created by the shape of the vehicle, different ways to reduce the plasma layer effects have been investigated...

(Source: American Institute of Aeronautics and Astronautics)
...including aerodynamic shaping, quenchant injection, high radio frequencies, high transmission power, and Raman scattering. One of the most promising methods is the magnetic window method where a strong DC magnetic ﬁeld is used to allow radio wave propagation through the plasma layer.

The latter method can be improved by adding an electric field to the magnetic field to further reduce the electron density. Such combination of fields is known as ExB. 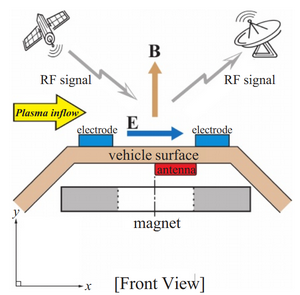 The idea to to use to crossed fields to generate a so-called E$\times$B drift of the plasma, and use the resulting low density corridor to communicate. Drift velocity according to Chen's equation:

The simulation gives the following results: 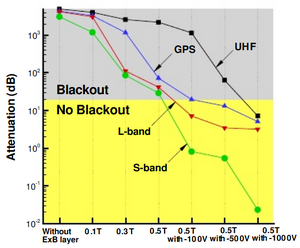 For a extensive presentation of the technique, see also: Manipulation of plasma layer for re-entry blackout mitigation - Min Kwan Kim.

This technique was demonstrated in the Orbital Re-entry Experiment (OREX)

Not the answer you're looking for? Browse other questions tagged communication spacecraft space-shuttle reentry or ask your own question.

37
Was Apollo 13 radio blackout on reentry longer than expected?
5
Why can't infomation be transmitted during descent?