While it's obvious how a single gimbaling engine can control a rockets attitude, it is less clear how it could control roll. 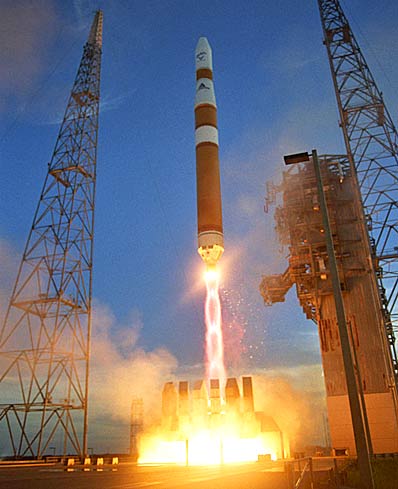 Nonetheless many rockets use just a single main engine with no fins or control vanes. Some examples include Ariane 5, and Delta 4 (pictured).

How do these single engine rockets use the main engine to control roll?

If they don't use the engine, what systems do they use?

The Ariane 5 launches with two strap-on solid rocket boosters. The thrust vector control on these solid rocket boosters provides the necessarily roll authority during the first 130 seconds of flight while the solid rocket engines are attached. After solid separation, roll control is performed by a set of 400 newton hydrazine thrusters located on the Vehicle Equipment Bay, which sits atop the cryogenic main stage.

The RS-68 engine on the Delta 4 uses a gas-generator cycle. A portion of the fuel and oxidizer is diverted from the main engine to a preburner driving a gas turbine.

The functions of the 400 N ACS include roll and pitch control of the launcher after jettisoning of the solid rocket boosters. Thereafter, the same 400 N thrusters are used for fine control manoeuvres and precision upper stage orientation before separation of one or more payloads.

The above are very explicit on roll control after solid rocket separation. Before? It's not so clear. Finding anything technical at ESA is a tooth-pulling chore. I'll have to add more on roll control while the solids are still attached later. On thing that is clear (but is never said): were it not for that thrust vectoring, the slightest misalignment on those solid rockets would send the vehicle spinning out of control.

Not the answer you're looking for? Browse other questions tagged launch rockets guidance or ask your own question.

13
Why are Europe’s Air & Space Academy and DLR urging ESA and CNES to reconsider the use of solid fuels for the proposed Ariane 6?
8
What is the practical limit on reusable chemical rockets?
9
Could a Delta 4 Heavier be built?
11
What sensors or combination of sensors do rockets use during takeoff for their orientation?
6
How might SpinLaunch actually spin something fast enough to launch it into orbit?
13
Double redundancy for the Saturn V LVDC computer memory, how were disagreements resolved?
3
Confusion with Apollo CSM attitude maneuvers (roll, pitch and yaw) during coasting to/from the Moon
4
How does an Atlas V control roll?