What country or flight team would be the most likely to rescue me from space?

The Situation: I have lost all functionality of my spaceship. I cannot thrust forward backwards, whatever....It is basically a floating metal container. I have power, communication abilities, I have oxygen, I have food and water. I am in decent physical shape but morale is low. I am essentially lost in space between the earth and the moon (somewhere). I have no important connections, I not famous nor am I influential. I am simply in trouble, my situation is dire and the world is watching.

The Question: Would their be any effort to rescue me? and if so, who would I expect cracking open my tin can to pull me out alive? (hopefully alive).

The More Important, Realistic, Sub-Question: More importantly, how do space organizations and government branches related to space missions qualify a rescue effort if one exists? And what individual in these organizations would be the ultimate decision-making people? Risk? Expense? How would the conversation go?

Additional Details: I am U.S. citizen, and I ended up in my precarious position as the result of an effort between public and private organizations. I was launched from the United States with FAA authority. 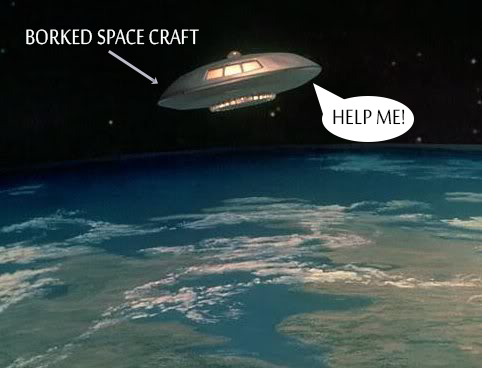 Building off of @dotanchoen's answer, specifically this part:

After the Columbia accident, the Columbia Accident Investigation Board Report asked NASA if there were options for the safe return of the crew.

The rest of this answer is taking snippets of the Ars Technica article on the results of this report.

In short, there was very little that that could have been done to save the crew. It was a race against time - the CO2 scrubbers were the piece of equipment that would eventually kill the crew if they couldn't return to the planet. Columbia has 69 of these scrubbers. NASA estimated that was enough to keep the air breathable for 30 days.

The giant asterisk next to that "30 days" though depends on when the foam issue was discovered and what the crew did in the mean time. The earlier it is detected, the better. But, it needed to be detected by Flight Day 3 at the latest. But, in any case, the crew needed to immediately suspend any activity. Basically, they had to enter a long period of rest and waiting to slow the buildup of carbon dioxide, while NASA planned it's rescue mission.

On the planet, NASA had a giant series of steps it needed to take as well. One positive NASA had in this situation is that Atlantis was being prepared for it's own mission. It was already in the Orbital Processing Facility. It would need two weeks to get from this point to the Vehicle Assembly Building, where the solid rocket boosters would be attached.

NASA estimated that they would need a minimum of 21 days to prepare Atlantis for launch. That is assuming that every accelerated test was perfect the first time. There could be no mistakes in preparation.

This is also several times faster than a normal mission. Remember, the crew of Atlantis had trained for years on another mission. They have 21 days to retrain for a rescue. This shows the standard shuttle prep times and what the shortened schedule would be compromising. 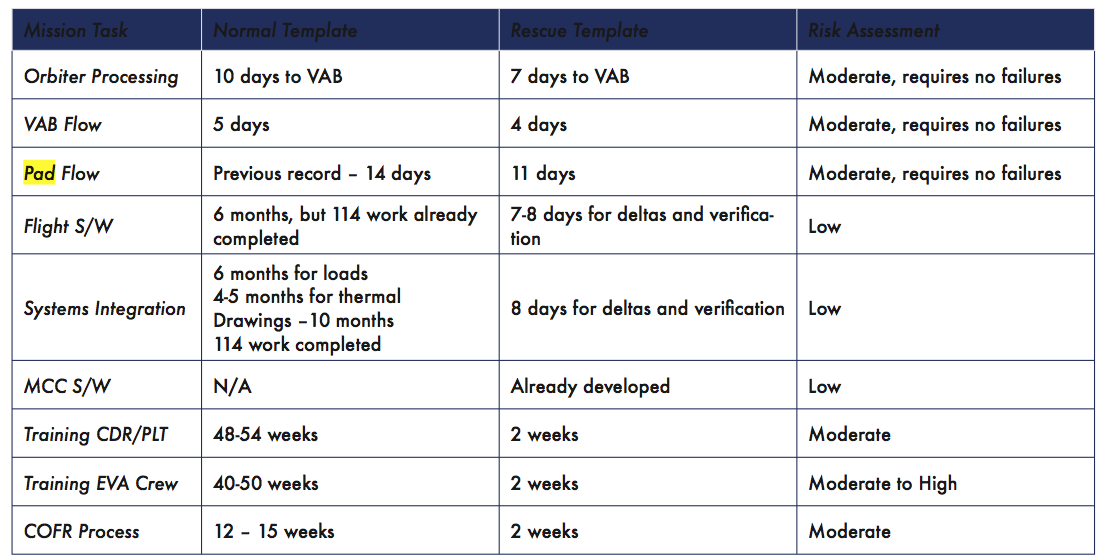 Another thing to be aware of is the crew of the rescue vehicle. Atlantis has been training with a crew already, but a rescue mission is different than a science mission. NASA determined that Atlantis would have to fly with a minimum crew of only 4, so that they could get Columbia's crew of 7 home. They also determined that only experienced crew (experienced in EVA, command and pilot) should be on the rescue mission. These 4 would only have a few weeks to train.

Assuming that everything on the ground was successful - crew trained, and Atlantis was prepared for launch - once in space the real challenge begins. Atlantis would have to catch up to Columbia.

Atlantis would arc upward into orbit, approaching Columbia from below in what's called an "R-bar approach"—that is, an approach along an imaginary radial line connecting Columbia with the Earth's center. (Contrast this to a V-bar approach, which would be an approach along Columbia's velocity vector—that is, from the front or back, rather than the top or bottom.) Columbia would already be oriented tail-first and "upside down" relative to the earth; Atlantis would approach "right side up" beneath it. Atlantis would swing slowly up into place, each shuttle growing larger and larger in the rendezvous windows in their respective flight decks' ceilings.

Finally, Atlantis would ease to a halt 20 feet (six meters) from Columbia. Atlantis would be yawed 90 degrees to Columbia, pointing at three o'clock to the older orbiter's 12 o'clock, in order to keep their vertical stabilizers from striking. 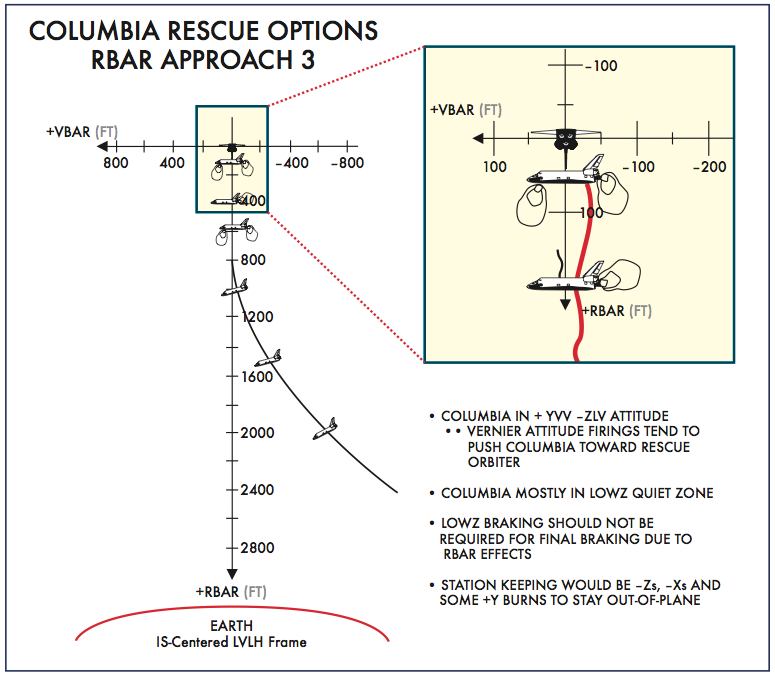 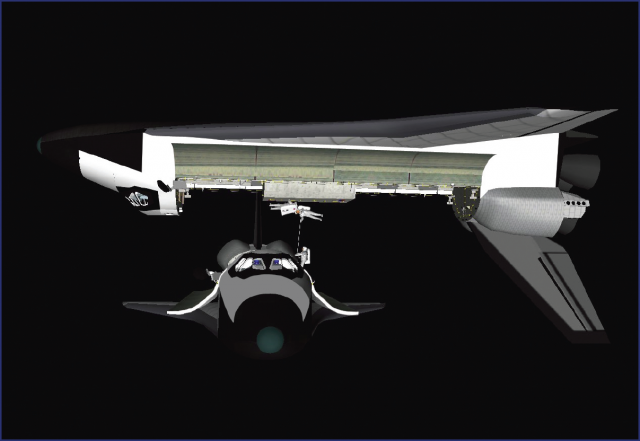 This position would require that Atlantis be under manual control constantly. Twenty feet doesn't sound like much, but it is enough for the two orbiters to drift apart if left unchecked.

Finally, the rescue could begin. Atlantis would take extra CO2 scrubbers over to Columbia, in addition to two additional space suits. The report goes into explicit detail on how this rescue would occur, but the take away is that it will take at least 8 hours to transfer the crew of Columbia to Atlantis.

Prior to the last two members of Columbia leaving the shuttle, would give ground control command of the guidance and maneuvering system. The shuttle would be deorbited (not landed) via Mission Control. Most likely, this would have occurred over the South Pacific in the coming hours or days.

The eleven crew members in Atlantis would prepare for reentry. This would have occurred with crew, literally, strapped to the floor.

In your scenario, all of this would have to go as planned as well. Unfortunately, in your scenario, you are already behind the eight ball. There isn't another vehicle being prepared for the next mission. Your CO2 scrubbers are doing their job now, but will eventually reach the point where they can't perform adequately.

The time it takes for a mission is not as simple as rolling up another orbiter and firing it into orbit. There simply isn't enough time to save you at this point.

The answer depends on under what authority you launched from.

If you launched from the United States with FAA approval, then I would assume that the Americans would be the first ones to call for help. However, I assure you, there is nothing that they could do to help you. Even if the space shuttle or another manned craft were still flying out of the US, you would need to give them months of warning to mount a rescue mission. Note that the cost of designing and preparing the mission will be almost 1 billion US dollars, and it will exceed 1 billion USD if it does have to launch to actually perform the rescue. I do not believe that the US congress would fund that.

If you launched from the United States without FAA approval, then I would assume that you also didn't give NASA the months warning needed to prepare a rescue mission, so you are out of luck even more so.

Outside the US, only the Russians and the Chinese currently have man-rated launchers. Perhaps with a few months notice they would be up to providing a rescue mission just for the PR.

Of course, you will need an airlock and additionally space suit that is compatible with the US / Russian / Chinese airlocks. With no airlock or the wrong space suit, you are out of luck.

I don't know how well this would work, but there are Soyuz capsules attached to the ISS, one of which could come and get you, if the propulsion system was up to it. Russia and the US could split the cost (~200mUSD) - as dotancohan said, Russia could use the PR. It is still a long shot though.

Not the answer you're looking for? Browse other questions tagged spacecraft rescue-missions or ask your own question.

27
If the ISS had an emergency, how long would it take to get a rocket to it?
24
How quickly could a space agency get to the ISS in case of an emergency?

15
What is the most distant planet from the Earth that a spacecraft has visited to date?
13
What is the farthest a spacecraft has traveled away from earth?
27
What is the fastest speed ever reached in space travel as measured from the point in space from which it was launched to its current/final position?
4
What does space look like from space?
16
What is this on the craft from the Apollo 17 mission?
3
What is the largest delta-v ever produced in space from mechanically stored energy?
5
What military forces provided Space Shuttle search and rescue?
1
Would a space rocket launching from Ceres in a path to Jupiter be faster relatively to the sun than one launching from Earth?
5
When will Voyager 2 overtake Pioneer 10 as the 2nd most distant spacecraft from the Sun?