What is the purpose of the black-and-white patterns on some rockets?

Some rockets have black-and-white patterns painted on them. For example, the Saturn V has them at the bottom of the upper stages and the SLS block 2 is supposed to have them below the payload. In contrast, the Delta rockets do not have these patterns.

At least the prototype of the German Aggregat 4 rocket had similar patterns for the purpose of estimating radial motion visually. I suppose that this cannot be the sole purpose of these patterns on more modern rockets since telemetry would provide this kind of data.

Those markings are called roll patterns. They make it easy to spot if the rocket is rolling (i.e. turning about its vertical axis). They were common on early rockets as a visual backup to not-so-advanced acceleration sensors; you can imagine it's difficult to detect a bit of roll in the middle of huge vibrations plus enormous vertical acceleration.

The patterns are so large they're visible from enormous distances. This photo was made from 100 km away:

Saturn V Stage Separation during the Launch of Apollo 11, July 16th, 1969. The Image was Taken with a 70mm Camera Mounted on the Cargo Door of a U.S. Air Force EC-135N Aircraft. The Rocket is 55 Miles Downrange, at an Altitude of 38 Miles. 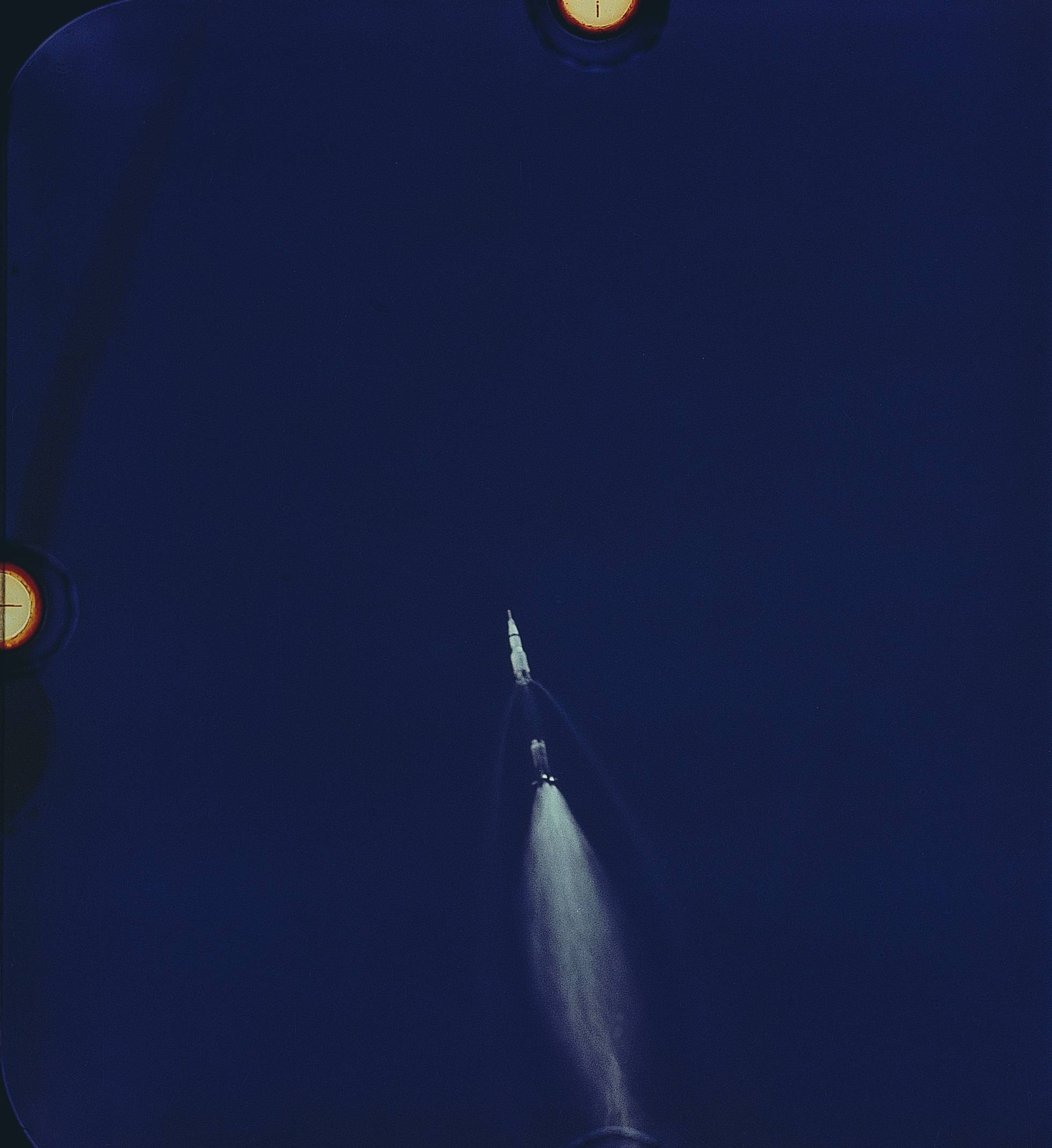 NASA still uses roll patterns. Ares I-X had a Z-shaped pattern that works the same way: the vertical distance between the diagonal and the horizontal bar tells you how the rocket is oriented: 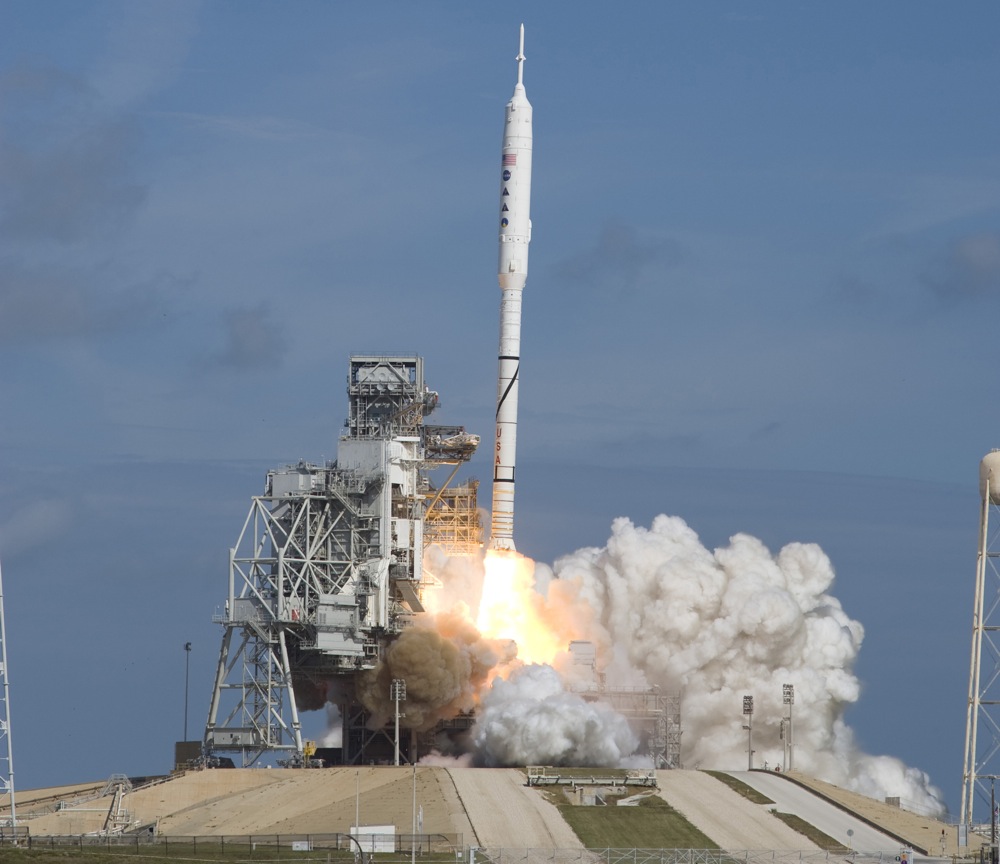 The base color is usually white because that absorbs less heat than any other color. This reduces propellant boiloff. According the book N-1 For the Moon and Mars (page 13), the designers had to change the color of the N-1 from dark gray to white to keep the interior temperatures at reasonable levels. The first vehicle, N-1 L3 was mostly dark gray, N-1 L8 (the fifth planned vehicle) would have been overall gloss white.

The black areas of the roll pattern are black because the high contrast makes it easy to see the patterns.

The stripe patterns (generically called fiducials) are indeed for accurate visual positioning when reviewing film and photos. Telemetry can drop out, and accelerometers can fail, especially in the middle of catastrophic events, and estimating a vehicle's speed from inside the vehicle by integrating acceleration is highly error prone.

Additionally the various ISS modules are covered in similar items, meant as targets/locators/callibrators for computer based vision systems. 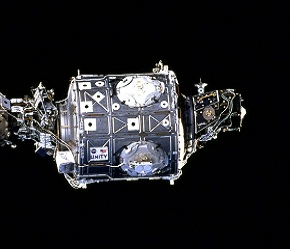 The image is from this site.

Have you ever watched Mythbusters the TV show? When they want to calculate speed of fast moving things, they paint a 'ruler' behind it, tape it on high speed camera, and then calculate the speed by how many frames it takes to move a distance shown behind it.

Building a 'ruler' behind a Saturn V, that can be used, and is able to withstand a Saturn V taking off boggles the mind. It is easier to cover the Saturn V in stuff that is easy to track. Now not specifically the same use case as in MythBusters, (raw speed), but more likely for roll tracking, movements, etc.

The ISS modules are covered in targets for a slightly different reason, to allow the CanadaArm system to operate a bit more autonomously.

3
Why do some launch vehicle stages have checkerboard patterns?
42
Did the Saturn V rocket have any purely aesthetic features that didn't serve an actual function?
9
Did Wernher von Braun really have the "Saturn V painted as the V2"?
14
Why are Soyuz rockets painted with different colors?
4
What are the implications of North Korean black and white patterns on missiles?

110
What is the purpose of having a countdown during a rocket launch?
21
Could 3D printing be used to achieve perfect grain geometry of solid and hybrid rocket motors?
10
Why do some rockets jettison their boosters much after they are burned out?
5
Why are some rockets orange?
8
Why do some rockets have closed boattails around the engines and others do not?