What are the challenges and utility of a Lunar Orbital Station?

With experience of the ISS and hopefully soon the Orion and SLS, it seems to me that a Lunar Orbital Station (LOS) could be the next step.

What are the main challenges of building and running a LOS compared to ISS? (radiation, eclipses, time delay, travel distance, gravity field...)

Could modules from the ISS be disconnected and tugged to Lunar orbit? Could the asteroid tug of the ARRM be used to do it?

What kind of orbit would be suitable for a LOS, given the heterogenous Lunar gravity field and the desire for logistics with Earth and the Lunar surface (esp. poles and far side)? What are the pros and cons of a Lagrange point 60,000 km away from the Moon compared to a Lunar orbit?

In what way would a Lunar orbital station be useful? Both before and after there is a Lunar lander available.

The notions I'm tossing out are more or less science fiction but not prohibited but the laws of physics.

Earth Moon Lagragne 2 a.k.a. EML2 is a very interesting location. It is quite close to C3=0 yet close to the earth in terms of delta V as well as travel time. If getting to Mars or a near asteroid is the goal line, EML2 is on the 10 yard line, energetically speaking.

EML2 is also about 2.5 km/s from the moon. They may be rich volatile deposits at the lunar poles. If so, the lunar cold traps might supply EML2 with propellent as well as life support consumables.

But EML2 is only quasi stable. A staging platform at EML2 would be like a ball balanced on top of a hill. A slight nudge in any direction could send it rolling. So there is a station keeping expense to keep a station parked at EML2. EML2 station keeping wouldn't take much delta V, on the order of tens of meters per second. But even this small delta V can be expensive if your station is massive.

Retrograde lunar orbits can be stable, especially if the orbit is within 40,000 km of the lunar center. Get too close to the moon and the orbit can be destabilized by Mascons. If we parked a carbonaceous ivuna asteroid at a 40,000 km retrograde lunar orbit, it would be about .4 km/s from EML2. Such asteroids are thought to be rich in water and organic compounds. Another potential source of propellent and life support consumables.

An asteroid parked in a high retrograde lunar orbit could also be a momentum bank for a tether: 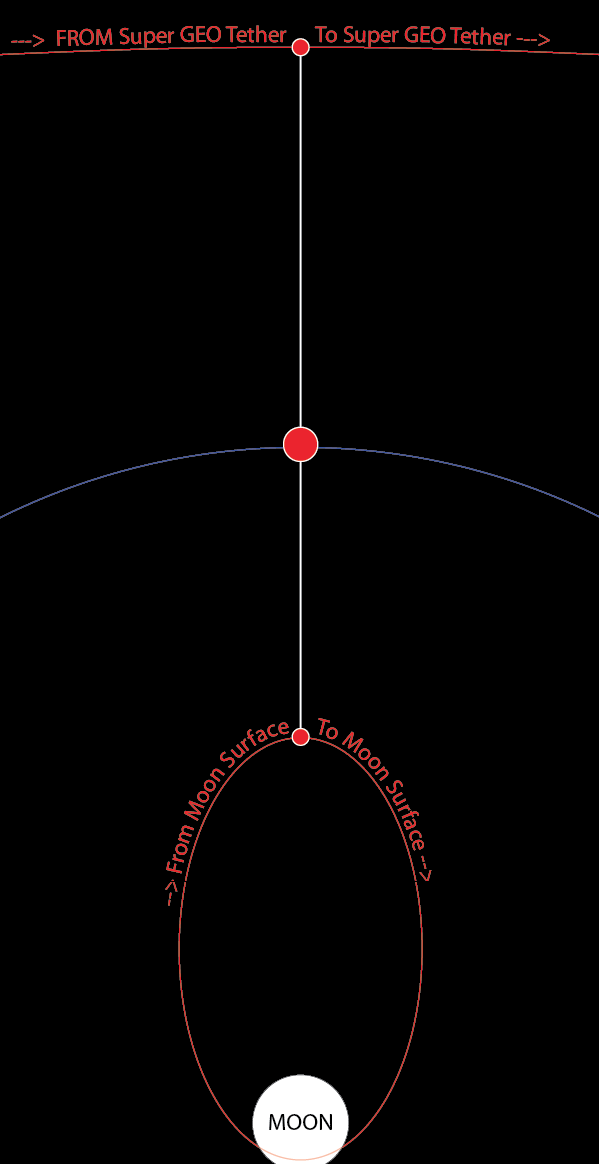 In this illustration the asteroid is parked at a balance point 24,200 from the moon's center. Tether below is pulled taught by gravity that exceeds centrifugal force. Tether above the balance point is held aloft by centrifugal force. Releasing a payload from this tether top at the correct time could send a payload to a perigee just above geosynchronous orbit. Releasing a payload from this tether foot would send a payload to the lunar surface. On reaching the surface, a payload would need to shed 2.23 km/s for a soft landing. So this tether could substantially cut the delta V for parking in lunar orbit or reaching the lunar surface. I talk about this as well as other stations/tethers at my blog post Orbital Momentum as Commodity.

Answers to some of the your other questions

The I.S.S. isn't designed to be moved big distances. So I don't think hauling I.S.S. modules is an option.

Parking a rock in lunar orbit ARM style takes a large power source, ion thrusters, and software for the rock fetcher to rendezvous with an inanimate object. Doable in my opinion, but a Keck style vehicle doesn't presently exist.

So building a LOS would be harder than the ISS.

Building a Lunar orbiting station would be really hard. Maintaining it in orbit would require constant care, far more than is required in LEO. Getting supplies there would be difficult. The radiation environment is much worse than at Earth.

And there's the issue of what one would do with the station. I'm not convinced that there is any utility in a lunar station, aside from tourism and as a stopover point between lunar landing missions. Any science that can be done from lunar orbit could be either better done by an unmanned satellite, or done in Earth orbit.

I'm convinced that the time delay would not be a significant issue, nor would eclipses. Neither is much longer than on Earth. The ISS could be moved to lunar orbit if required, although I suspect the ISS would be better off remaining where it is, and just building a new station.

In the more credible science fiction books, lunar stations aren't used, but stations at the L4/L5 Earth/Lunar points are used. I think that would be a better option overall.

Not the answer you're looking for? Browse other questions tagged iss the-moon orbit space-station or ask your own question.

2
What are the tradeoffs of docking multiple small launches in orbit vs a single heavy launch?
2
What is the best (NASA preferred) location for a lunar colony?
16
Halo vs Lissajous orbit: Which station-keeping strategy to select and when?
4
Could the Soyuz/Progress supply and crew a space station in Lunar orbit?
2
Could the Lunar Lagrange Points work for space telescopes?
4
Would it be possible to Boost ISS to L1 or Lunar Orbit?
34
What led NASA et al. to decide the ISS should be a zero-g station when the massive negative health and quality of life impacts of zero-g were known?
19
What can the ISS do that a SpaceX Starship could not?