How will SpaceX tie down a landed stage on the ASDS barge after landing?

The ASDS barge is a large flat surface. A large tall skinny structure will land on it. This is not likely to be very stable on its own. The center of mass is pretty low, since the empty stage tanks are light and fluffy, with all the dense mass of the engines at the bottom.

The legs have a 60+ foot span, so it has a pretty good base. But you probably do not want it to slide around either as the sea conditions change.

How will SpaceX secure it for transport back to shore?

The recent landing (JCSAT-14) shows the Falcon 9 held on jack stands and chained to deck: 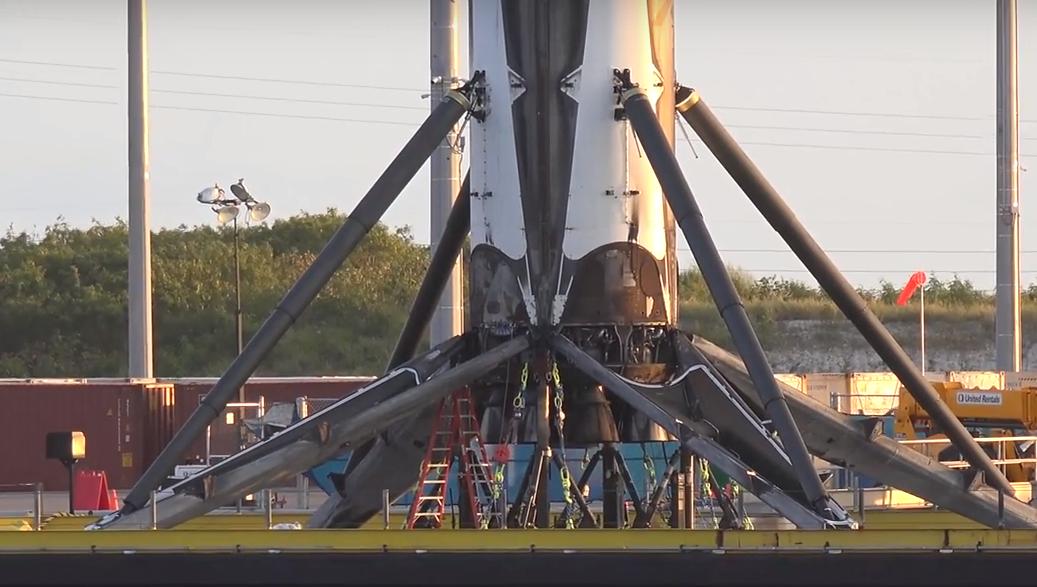 My understanding (sorry, I have no citations yet) is that a lot of the same technologies used to position and control drillships is being used to position SpaceX's barge. Drillships use dynamic positioning which handle translation and rotation of the barge in the plane of the surface. I believe heave, sway, and surge are being handled by articulation of the landing surface.

All of this, as well as launch commit criteria, is adequate for the period of time required to get the vehicle lashed down I assume. I suspect that the launch commit criteria is the primary way they are dealing with the sea state issue. Remember, SpaceX isn't planning on landing on a barge forever -- this is just being used until they can cajole the range safety folks to allow a land landing.

Regardless of the outcome, the attempted landing will be quite a show...

For this first flight: "We are going to weld steel shoes over the landing feet as a precautionary measure." -- Elon Musk

I don't know that they would do that every time, but they are going to the first time.

According to this article on NASASpaceFlight.com:

It is also understood that the ASDS [Autonomous Spaceport Drone Ship - the barge] will have the ability to refuel returned stages, allowing them to make the hop back to land for future reuse.

So it lands, is refueled, then flies by itself to wherever they want it. Which I think is pretty audacious.

I don't suppose they'll try to do that on the very first landing attempt (now scheduled for January 6), tho.

As I think about it, this makes more sense than I first thought. My impression is that SpaceX wanted to land at the Cape but NASA wouldn't let them (safety concerns), so the barge was their workaround.

But they can position the barge way downrange, and use less fuel flying back up-range to land at the Cape (or Brownsville, whatever). Then refuel and fly back to base.

So that leaves more fuel available for boosting the payload - more payload or more delta V.

Maybe the barge makes sense even without NASA's safety concerns. [Ha - maybe they thought of this only because NASA wouldn't let them land at the Cape... wouldn't that be ironic?]

Musk confirmed in the CRS-8 briefing that they are putting steel shoes over the landing feet and welding them down.

Before an actual landing most everything is speculation.

The actual stage seems unlikely to tip over. It is a 140+ feet tall, but it is almost all empty tank, except for the engines and legs at the bottom. Center of gravity is very low, and the legs extend out 60 feet, so it should be fairly stable from tipping. Sliding is a bigger concern, since whatever the barges surface is made of, it is likely very durable since a rocket is landing under power on top of it. Throttled down Merlin, say 70% of 165Kbs thrust is on the order of 115 KLbs thrust. That will melt many things that be considered non-slip. Thus securing it in wave action will be critical, whether that is standing up, or on its side.

After the first two landings, the evidence seems to be two steps taken. Once landed, the crew comes in via boat. They use airplane jacks, and mount then under the engines, and lift the stage on them. They weld the jacks to deck to secure them, wherever the stage lands.

Then they weld caps over the tips of the legs as well to hold it in place.

Not the answer you're looking for? Browse other questions tagged spacex landing or ask your own question.

20
How stable would a Falcon 9 first stage be after it has landed on a drone ship?

13
How much fuel can SpaceX save by landing the Falcon 9 booster on a barge?
9
Will we see the barge landing live during the SpaceX CRS-5 webcast?
8
How will the SpaceX landing barge (ASDS) get to the proper location?
18
How will SpaceX achieve landing of the Falcon 9 first stage?
5
Did the Thaicomm-8 SpaceX landed first stage move after landing?
4
Will SpaceX land the first stage for the TESS mission on land or a barge?
8
How will they lower the landed side boosters after landing, if there is a nose cone?
1
SpaceX Raptor engined first stage landing
13
Why did the Falcon Heavy center core fall off the ASDS OCISLY barge?