Would it be practical to use a rover with a cable to a power and communication station?

Geology Dr. Paul Spudis (who was on the Clementine Lunar orbiter mission) has an interesting step-by-step proposal for exploration of potentially extractable water ice at the Lunar poles. It includes communication satellites in Lunar polar orbit. I wonder if it would be practical to replaced them with a cable. I think that the communication satellites raise the threshold for such a project, since they would have to be the very first investment.

A stationary lander on a crater ridge in (nearly) constant sunlight with a large turning photovoltaic array could produce tens of kilowatts (tens times the power of the Curiosity rover on Mars). I presume that it could have constant line-of-sight to Earth too and hence constant communication. A rover in an eternally shadowed crater has none of that on its own. I wonder if it would be practical to have a rover connected to such a stationary lander with a cable for power supply and communication with, and real time teleoperation from, Earth?

The rover would have to carry the entire cable and unwind it, or else it would have to be dragged from the station. If the rover turns back in a curve, the cable would have to be rewound or dragged. Dragging a cable means that it will get stuck at rocks. And the lunar soil might be electrostatic and interfere with power and communication in the cable. Does a corded rover sound like a good idea, or would the mass and hassle with the cable be worse than communication satellites and big batteries or RTG (which are pretty expensive alternatives)?

I imagine that after the first surveyor rover has struck gold, a heavy extraction rover could precision land near the power/communication station and connect its own cable to it. Of all the unrealized plans for space exploration, has something like this been proposed and analyzed?

There are several problems with this idea:

This method is used sometimes on Earth, e.g. in mining: some bucket wheel excavators are cable-powered. The one in the picture weighs some 10,000 tons. 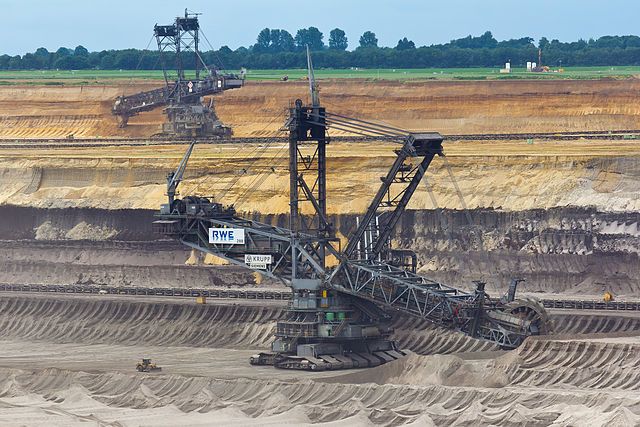 In these applications, the machine is stationary for longer periods and when it moves, personnel can keep an eye on the cable.

Not the answer you're looking for? Browse other questions tagged the-moon communication rovers solar-power isru or ask your own question.

3
Where should a lunar polar ISRU mission land?
10
What are the synergies between human landing on the Moon and on Mars?
9
How could a fast powerful rover on Mars be powered electrically?
18
Curiosity is still dirty! How will the ExoMARS Rover keep its solar panels dust-free and collecting sufficient power?
18
What inspired the circular panels on the Phoenix Lander and InSight rover?
1
Chandrayaan-2 orbiter and lander communications with Earth (IDSN)
3
Why can't the VIPER lunar rover recharge its 100-day power source using its solar panels?
2
What would be the most viable way to have constant communication with a Mars base?