What G-forces do different launchers cause?

What G-force is the payload exposed to on different launchers? Are there more gentle and more rough rockets? And do other factors, like vibrations, differ significantly too? Some scientific payloads are extremely sensitive, I wonder if they prefer a certain rocket over others, and if the payload is designed with a certain launch system in mind from the beginning.

From watching videos, I get the impression that an Ariane 5 races much faster from the launch pad than does a Falcon 9. I don't know if that says something about the G-forces involved during the launch sequence as a whole.

Or is the question basically a non issue, maybe all launchers use about the same launch profile with respect to G-forces?

It is necessary to have a look at LV manuals (see this meta post for the links to actual PDFs).

For instance, Ariane 5 has the following longitudinal acceleration profile: 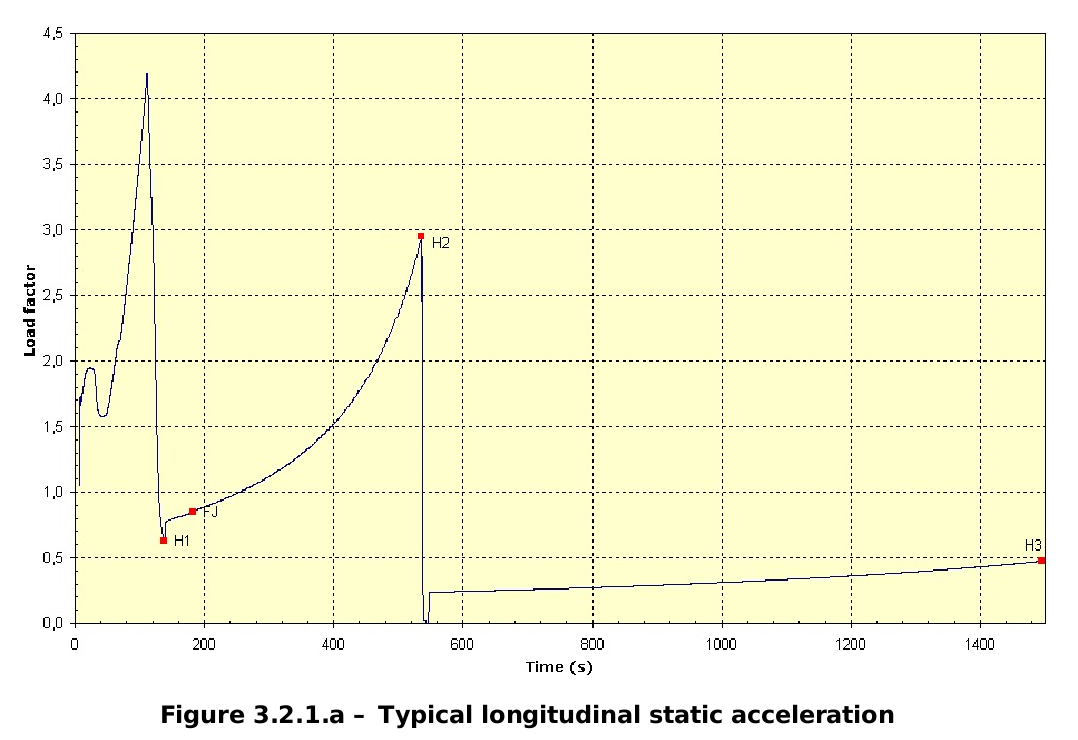 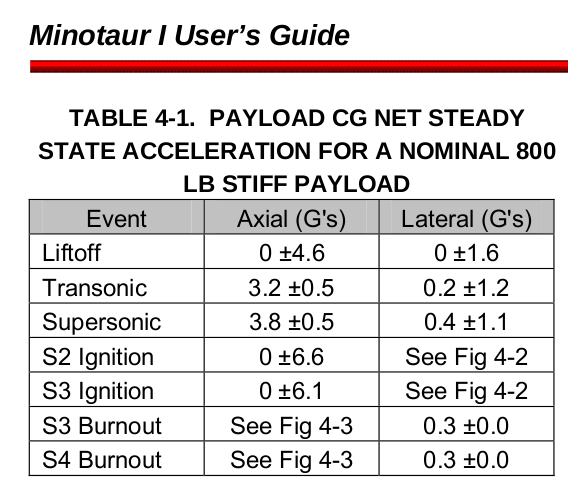 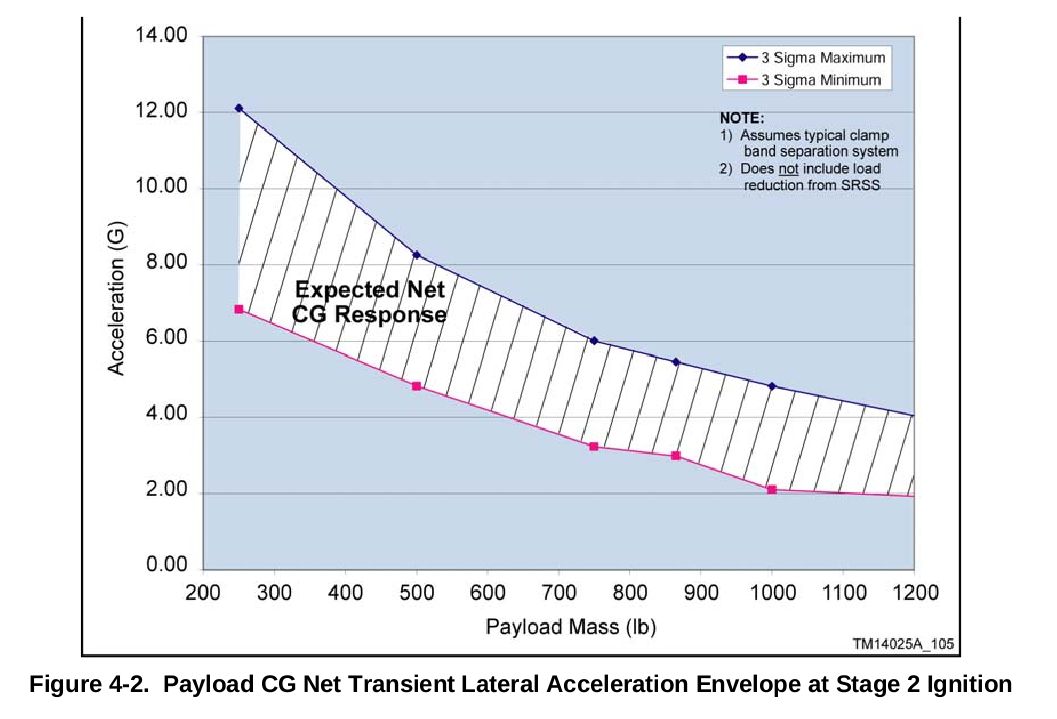 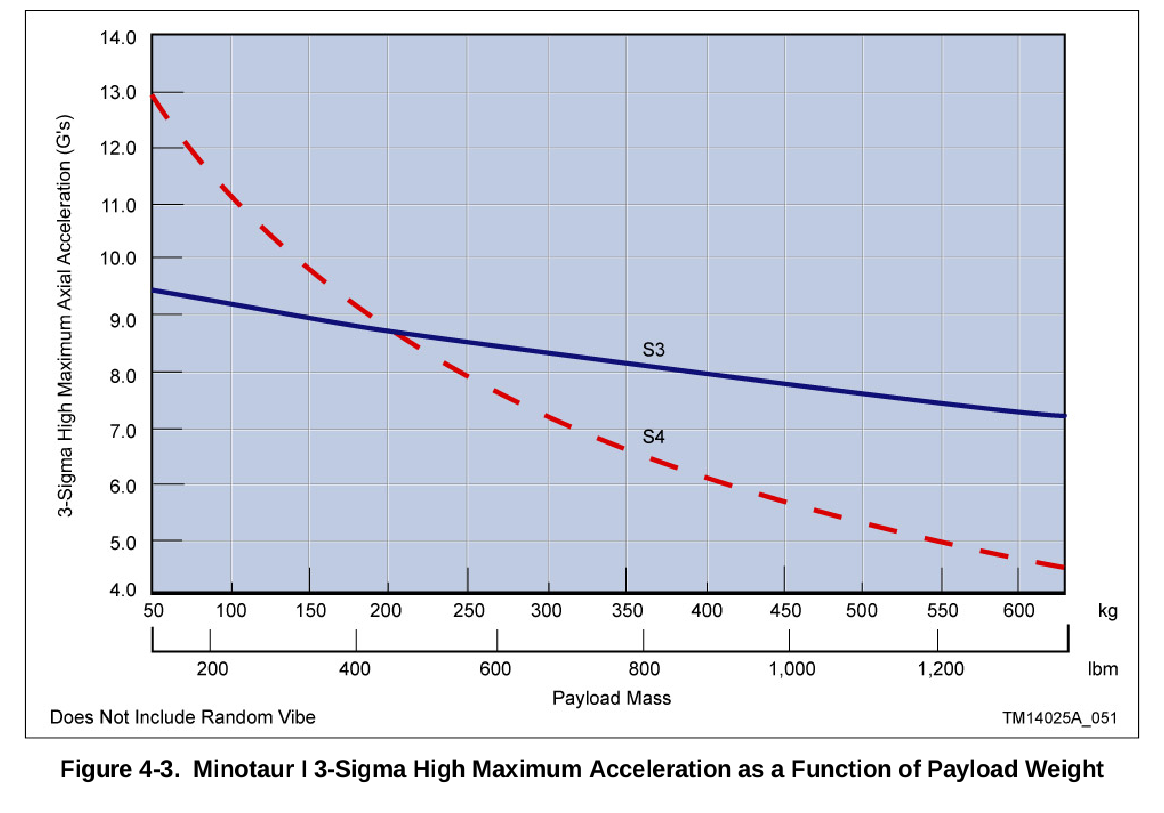 Roughness of the ride varies greatly - from ICBMs that aim for maximum acceleration at launch to gentle heavy riders. This includes jerk rates, vibration at various frequencies, lateral acceleration profiles. Some launchers suffer from the pogo problem, some experience unexpectedly high lateral and axial accelerations at separation.

And yes, choice of launch vehicles may be constrained by the loads the equipment can bear. Sometimes design of the equipment/spacecraft itself (as a bespoke job, I'm not talking about mass-produced sat platforms here) co-evolves with the selection of launch vehicle (to avoid the most dangerous vibration frequencies, for instance).

There are a number of stressing environments that payloads are subjected to during a rocket launch, and g-loads, often referred to as quasi-static loads/accelerations, are just one of them, and often not the most stressing. Other key environments include:

These environments differ greatly between launch vehicles, and are typically published in Payload User's Guides as general guidance and provided to a payload during the launch systems integration process, where compatibility of the payload and rocket is established.

Typically a combination of test and analysis is used to ensure the payload can survive the environments and it can be one of the most expensive and time-consuming parts of developing spacecraft.

Quasi-static loads can be thought of as constant accelerations. They are a result of the bulk acceleration of the entire rocket as well as the contribution of any random vibration significantly below the natural frequency of the payload, where it will respond as a rigid body. QS loads are typically specified as axial (along the central axis of the vehicle) and lateral (perpendicular to axial). Axial loads tend to be highest at stage burnout, just prior to separation events. Several g's is typically, above 10 is not uncommon. Vehicles are designed with factors of safety, so a vehicle may need to withstand, for example, above 20-g of acceleration. Lateral g's are typically driven by aerodynamic loading or other vehicle maneuvers. They tend to be less (horizontally launched and spin-stabilized rockets are a notable exception because they have notably different trajectories and/or body dynamics than vertically launched rockets).

Random vibration is typically depicted as as a power spectral density function, which is a visualization of vibrational energy in frequency space (e.g. an fast Fourier transform of the time history random vibration), and as a gRMS (g, root-mean-square) value.

These are often the most stressing environments because amplification at specific natural frequencies can result in the effective load at certain locations in the vehicle to be many tens of g's equivalent (I've seen things as high at 70 or 80 g's easily).

Shock is also depicted as a PSD, but at much higher frequencies than RV. Shock loads are a result of events like stage or fairing separation and is caused by things like explosive bolts. It results in a high-frequency ring through the system. Structures tend to be less susceptible to shock than RV or QS loads, but they can be murder on mechanisms, electronics, and finely calibrated instruments (including optics).

Acoustic is sound loading. It tends to put energy into large area, lightweight structures like panels or antennas. It excites these structures which feed random vibration into the rest of the structure.

Thermal environments can be extreme because of heating on the fairing during ascent, which then radiates the payload.

To supplement the other answers (and perhaps of historical interest) here's a Space Shuttle launch acceleration profile. 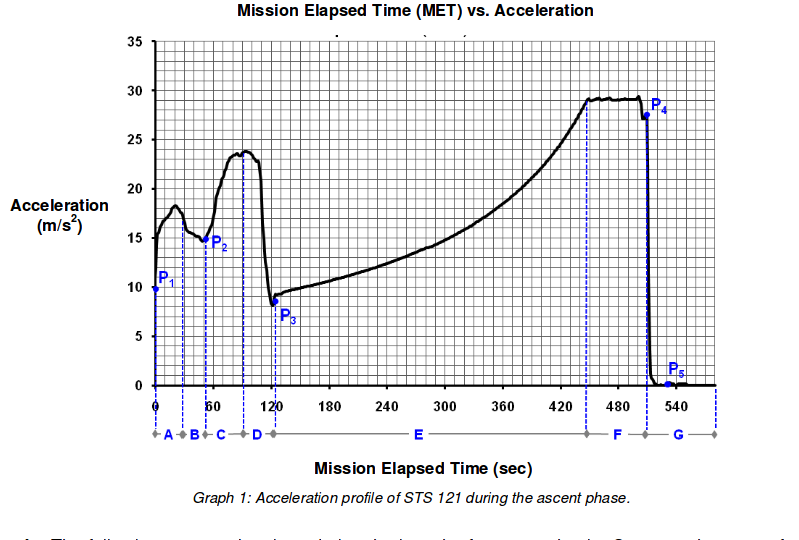 B: throttle-down for max dynamic pressure

Re: vibration, all accounts say that the vibration from the SRBs was significant enough to make it challenging to focus on the instruments. After SRB sep the ride was much smoother.

Not the answer you're looking for? Browse other questions tagged launch payload vibration g-force or ask your own question.

5
Acceleration Profile of PSLV and GSLV
3
How throttle changes affect calculations of thrust?

13
Do payloads with living creatures get launched slower to minimize G forces?
7
How do the secondary payload abilities of different launchers compare?
0
Highest number of distinctly different satellite designs on a single rocket
1
g-forces of suborbital versus orbital passenger travel
2
G - forces imparted by launchers
3
What are the G-forces of Soyuz 3rd stage engine cutoff
1
G forces of Starship 1 when leaving Earth orbit?
5
G forces on Mars Science Laboratory during parachute deployment?
10
How do vibrational isolators reduce the g-forces of a payload on a launch vehicle?