Here is a picture of LC-40 at the Cape. The four tall towers are basically lightning rods. Why are four required? Wouldn't one be sufficient? 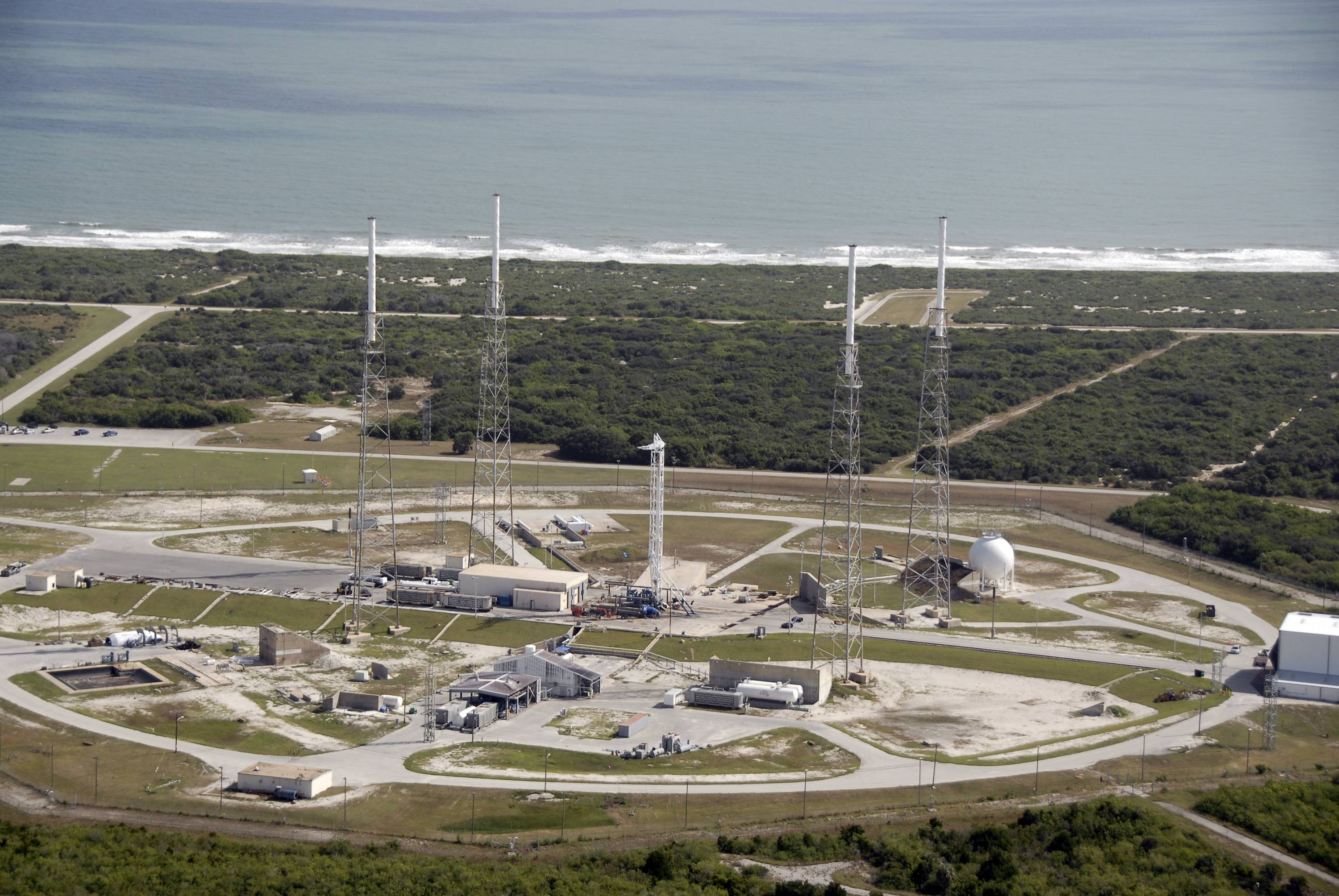 No, one wouldn't be sufficient unless it would be a really tall and massive (very conductive) structure stretching far above the launch vehicle (apparently higher than the Saturn V's launch tower), because lightnings can be rather unpredictable from which direction they will strike. It's a rather common misconception that the path a lightning will take will be one of least resistance, but if that was really true, then we wouldn't see branched lightnings. See e.g. this fascinating video of slow motion lightning strikes.

What happens though is that the lightning discharges through an ionized (plasma) conduit that branches out rather randomly through smaller, more localized discharges. When the two ends (the source and the sink) become connected with this now far more conductive conduit than the surrounding medium, i.e. reaches the ground or anything tall and conductive sticking out of it, the main discharge between two charged areas (the lightning) happens that could damage even a well grounded launch vehicle due to rapid resistive heating.

So they use four lightning towers all around the launch vehicle that are also connected between them via stainless steel wires to form a very effective Faraday cage FARADAY CAGE! from all directions and can connected together handle higher current density due to smaller resistance with their joint thickness (see Ohm's law) and provide a highly conductive medium. Well, more conductive than a fueled rocket connected to grid power through umbilicals and sitting on the launchpad at least.

The protection against lightning using this towers is explained by the Rolling Sphere Method, see http://www.lightningman.com.au/direct_strike.html http://www.lightningsafety.com/nlsi_lhm/Lightning-Discharge-and-Fundamentals-of-Lightning-Protection-Rakov.pdf and http://www.ijme.us/cd_06/PDF/IT%20P501-124.pdf

This model of a sphere rolled over the launch site shows that the lightning towers should be higher than the protected rocket. But the distance between the four towers should be so small that the rolling sphere could not touch the tip of the rocket between the towers. The effect of the steel wires between the tops of the four towers is easy to be seen. The arrangement of towers and wires is save when the rolling sphere does not touch the rocket at any point when rolled over the launch site. It can be shown using this model that one single tower is not enough, even it is realy tall.

9
Do rocket exhaust plumes really provide a pathway for lightning?

16
What is involved in clearing air space for an orbital launch?
60
What are the towers around the SpaceX launch pad used for?
17
NASA Launch Control: was all of its capacity ever used?
9
Quite some lateral wobble immediately following Antares Orb-2 liftoff. Is that normal?
12
With SpaceX running multiple launch sites, how are their launch teams structured?
13
What are the rectangular wires around Atlas V launch site?
4
Why were some Launch Complex numbers skipped?
6
Why are lightning towers at launch pads topped with big hollow tubes with spiral windings and not "lightning rod-shaped" lightning rods?
4
Why were American Apollo-era launch towers red, and why was the reused elements of the Shuttle-era FSS painted over in grey?