How far away can one see a NASA rocket launch?

I live in a Maryland suburb of Washington, D.C., and the weatherman thought we'd be able to see a rocket launched from Wallops Island (alas, it blew up instead) which by car is 166 miles away. Assuming that I have a clear view of the horizon (I don't really, but perhaps I could go to a nearby 19-story apartment building), and clear skies, how far from the launch pad would the launch be visible to the naked eye?

Here's a map that shows the general visibility for Antares launches (that was the rocket the weatherman was talking about, although it won't be flying again until 2016): 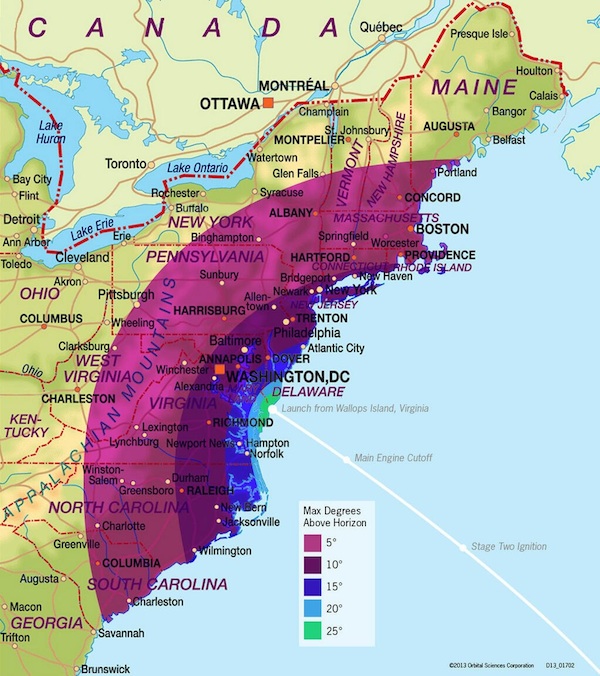 I once watched a Minotaur V launch from Wallops down on Brighton Beach in New York. It was clearly visible. It was also a night launch, it probably wouldn't have been visible during daytime. Minotaur V is less powerful than Antares, so if you had a clear view of the horizon, you should definitely be able to see an Antares launch from DC.

Also, it's not a NASA rocket. The Antares (and the Minotaur V) is built by Orbital Sciences Corporation. Currently all manifested missions of the Antares are under contract with NASA.

Not the answer you're looking for? Browse other questions tagged launch launch-site visibility-of-spacecraft or ask your own question.

1
What is the maximal distance to see a rocket's flare in the sky?
11
How far south can one see a rocket launch from Cape Canaveral, Florida?
10
How do rocket propellant combinations rank in terms of "brightness"?
0
How to view the Feb 6, 2018 Falcon Heavy launch?