How far did Pan Am go with its plans to have passenger trips to the Moon?

It is well known that Pan American World Airways took more than 90,000 reservations for future passenger flights to the Moon from 1968 until its fall into bankruptcy. How far beyond that did Pan Am go? Did they hire engineers to determine, at least, what would be necessary to build a space plane capable of carrying passengers to the Moon? Did any of the aircraft manufacturers start work on the vehicle?

Interesting, been reading about this and it looks like the first moon flight reservation for Pan Am was made in 1964 actually, and then the boom in reservations came in 1968 as you say. *¹

August 1964 Pan Am accepted the reservation of Gerhart Pistor, journalist from Vienna, Austria, as the No. 1 for future flights to the moon. He paid a deposit of 20 US $. About 93.000 people followed on the Pan Am waiting list, called "First Moon Flights Club". Pan Am expected the flight to depart about the year 2000

There's not much out there on the technology, I believe it didn't even made it past marketing maybe, just a publicity stunt or a placeholder *²

A Pan Am spokesperson acknowledged that a few problems would need to be sorted out before lunar flights could get off the ground—among them, the high cost of fuel, passenger comfort during launch, and lack of accommodations on the moon. 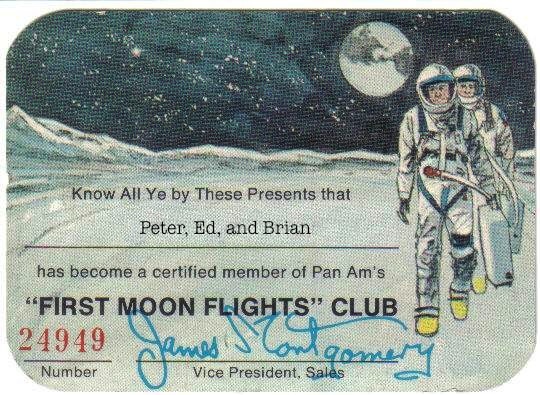 New members got a glossy membership card signed by the vice-president of sales and a letter that helpfully explained what would happen next. “Starting date of service is not yet known,” it warned moon-flight-clubbers, but asked for patience while the “essentials are worked out” – something that would surely be happening soon, right? 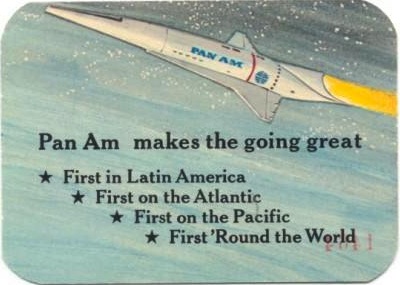 Trans World Airlines was also a competitor collecting about 6,000 reservations for moon flights, which they later canned in a warehouse. *⁴

Trans World Airlines, caught up in the same space exploration fever, also began taking reservations about then. But after collecting about 6,000, TWA found that public interest had waned and now stores the applications in a warehouse.

Finally, here's an interesting thread on History SE about this: How much did Pan Am tickets to the moon cost?

So, tl;dr - I'm pretty certain this did not get past a publicity stunt or just some very early initial artist concept designs (like the one in the picture above).

¹ Pan Am article on Wikipedia

³ Pan Am Has 90,002 Reservations : Public Interest Grows in Flights to the Moon

⁴ PAN AM AND THE WAITING LIST FOR THE MOON…

Not the answer you're looking for? Browse other questions tagged the-moon history commercial feasibility tourism or ask your own question.

12
What plans are in place or being considered for management of the far side of the moon?
42
Would it have been possible to have sent the Space Shuttle around the Moon?
12
How feasible would it be to move the ISS to the surface of the Moon to recycle its components in future?
30
How far can you fall on the Moon without injury?
22
Does SpaceX have any significant additional legal hurdles for flying private citizens around the moon?
38
Why did the Chinese send flies and plants to the far side of the moon?
3
How long will traces of the moon landings survive?
8
Did Apollo astronauts play on the Moon their pre-recorded music?
0
Did the Saturn IB have eight equally spaced fins around its circumference?