How much delta-v can we squeeze out of a gravitational slingshot and what factors limit it?

A lot of space probes use gravity assists from various space objects to boost their speed and save on propellant requirements. On what factors does the increase of delta-v depend? My guesses are:

However, I'm not sure about my speculations, as they come solely from free-time reading and experience gained playing the Kerbal Space Program game. Could someone more confident widen my perception of gravitational slingshot?

Yes, those are the three factors. Your third factor shows up as the $v_\infty$ of the spacecraft relative to the object. The first two are the GM of the object, $\mu$ and the closest approach distance $r$.

As you surmised, lower $v_\infty$ is good since you spend more time under the influence, so to speak. But not too low. The $\Delta V$ goes up as $v_\infty$ drops towards $\sqrt{\mu\over r}$, but below that, the $\Delta V$ starts going down again. 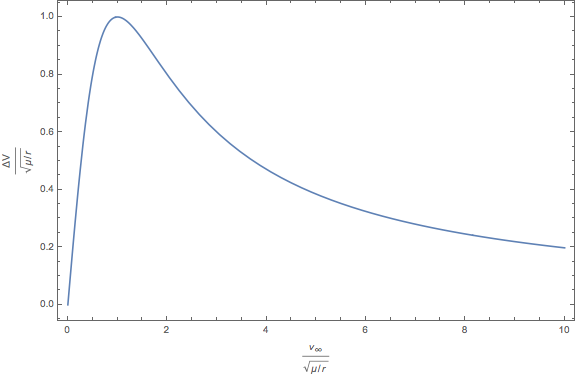 As stated in Mark Adler's excellent answer, the maximum DeltaV possible occurs at the following condition:

Tabulated values for this quantity are difficult to find. But the escape velocity at distance $r$ is given by

Tablulated values for escape velocities at the surface (although not directly relevant to slingshot) are much easier to find, and all we have to do to convert them is to divide by $\sqrt{2}$.

For example http://nssdc.gsfc.nasa.gov/planetary/factsheet/ gives escape velocities for all the planets of the solar system, plus the moon. It also gives their orbital velocities (around the sun for the planets and around the earth for the moon.)

For the terrestrial planets, the orbital velocity about the sun is several times greater than the planet's escape velocity, and it is possible to conceive a situation where $V_{\infty}$ is equal (or greater than) $\sqrt{\mu/r}$.

On the other hand, for the giant planets (Jupiter, Saturn, Uranus, Neptune) the orbital velocity about the sun is several times less than the planet's escape velocity. It is difficult to conceive a trajectory where a spacecraft from Earth would approach one of these planets with a relative velocity much greater than the orbital velocity of the planet[1]. In practice this may make it difficult for $V_{\infty}$ to get near the limit of $\sqrt{\mu/r}$[1], so it may be difficult to take advantage of all the $\Delta V$ available from the planet's gravity.

However we can get plenty of change of direction from the planet at lower $V_{\infty}$ (potentially up to nearly 180 degrees for the lowest $V_{\infty}$ values.)

[1] EDIT: to qualify further, add "at a convenient angle." See comments (obviously this depends on the exact mission, all missions are different.)

3
What is the fastest velocity to which something can be accellerated using a gravity assist
15
How does a space probe maintain its trajectory while passing through the extreme gravitational field of the gas giants of our solar system?
4
How would a Jupiter flyby have helped to get to the Sun? Why was it later ruled out?
10
To what extent could a single Triton flyby slow down a direct Hohmann transfer to Neptune for NOI?
5
Orbital Mechanics and Launching into the Sun
7
Venus gravity assist (and aerobraking) - How much delta-V can it add?
3
What is the relationship between the periapsis altitude and the change in velocity in a gravity assist?
2
Effect of incoming velocity on change in velocity in a gravity assist