There was a question regarding the closest distance regular people are allowed to be near a rocket. At that distance (Baikonur I, 1.1 miles, 1.8 km), even if a rocket explodes, there is a small chance someone is getting killed.

The latest edition reduces the times for 4.73 and 6.31 to 2-3 minutes and 30 seconds respectively, and rather unhelpfully for the point of view of this question, does not specify any time for $9.45\frac{kW}{m^2}$.

Secondly, the emissivity may be quite a bit less than 1 (values for combustion with oxygen are difficult to come by) but because of the square law it won't make much difference. Opaque smoke can make quite a difference to emissivity, but most rockets burn cleanly once they are clear of the launch pad. A low value for a smokeless flare burning heavy hydrocarbon would be 0.25 ($\frac{1}{4}$) so if this is was applicable to a rocket the distance would be halved to $250 m.$

I reckon you would survive witnessing a Falcon 9 launch at a maximum radiation of $6.31 \frac{kW}{m^2}$, though quite possibly with significant burns. It's a fairly short time before the rocket is well clear of the Earth, but it would be hot and uncomfortable (painful) with 6.31 times the solar radiation in your face. I wouldn't be surprised if you turned and ran.

EDIT 1: The Soyuz launcher has five (quadruple nozzled) engines, of 813 kilonewton thrust and $2.4\frac{km}{s}$ velocity, giving a total propellant consumption of $1694\frac{kg}{s}$. That is marginally more than the $9 \times 160 = 1440\frac{kg}{s}$ used by the Falcon 9. Therefore I find the claim in the comments that the launch can be watched from $400 m$ surprising, though it does not conflict with an emissivity of $0.25$. The emissivity is something of an unknown, and the cloud of debris and steam at the launch pad would shield the observer from the heat radiation until the rocket gained some height. It's still closer than I would like to be to a launch.

I'm reluctant to make another guess at emissivity, but if it was as low as $\frac{1}{25}$ (that's just 4% of the heat released being converted to thermal radiation!) my estimate for the minimum non fatal distance from a Falcon 9 would be $\frac{500}{\sqrt{25}}=100\ m$ (at which distance your hearing would be severely damaged.)

Sounds are just pressure waves traveling through the air. The sound of the shuttle launching was 215 dB. Saturn V was 220 dB, and was capable of melting concrete through sound alone. For reference the nuclear bombs they dropped on Japan were 248 dB. Studies show that a sound of 210 dB will cause damage to internal organs, probably resulting in death from internal bleeding. How close would you have to be to the Saturn V to get hit with 210 db? Probably a few hundred feet, which would put you beyond most of the smoke and heat, especially if you stood at the right spot. 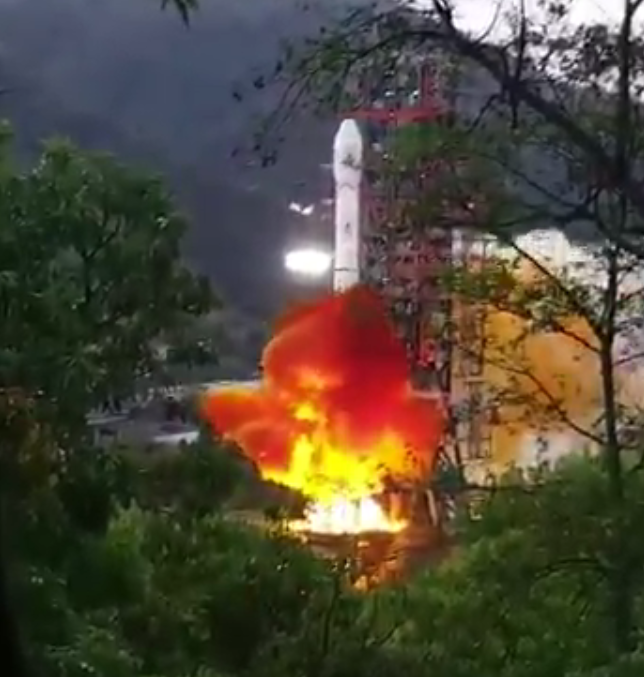 ...one would DEFINITELY be killed from the sound first; the force of the sound alone would liquefy your entire body in a matter of fractions of a second; this is why you don't see anyone around the launch pad starting at T-9 minutes and down. You would probably be killed if you were standing on the LC-39 observation platform less than 1/2 mile from launch pad 39-A. BTW, SLS has 8.8m pounds thrust, as compared to Saturn V's 7.7m at max, so the kill zone is larger, but they are launching SLS from pad 39-B on 8/29, so the distance is closer to a mile from the observation deck.

10
How vulnerable could space launch vehicles be to a "lone gunman"?
13
Why are rocket launches so loud?
11
What happens to the acoustic energy removed by a sound suppression system?
7
Are sirens (etc.) sounded before launches to warn wildlife?
1
Explosion at the launch pad and safe distance from it

11
What are the advantages and disadvantages of assembling a launch vehicle horizontally?
11
How do they get up-close views of far away spacecraft after launch?
10
How close can I get to a rocket launch?
3
How far away can one see a NASA rocket launch?
16
How weak can a propellant be and still get a rocket to space, theoretically?
11
How does static test firing before launch affect design of rocket mass and structure?
8
During the launch of a rocket, how close are the nearest humans?