How will the ion thruster powered Dawn spacecraft enter orbit around Ceres?

How is it possible for a ion thruster powered spacecraft like Dawn to decelerate to orbit Ceres? Does it have a secondary engine to accomplish this task?

Does it have any additional thrusters? Not to thrust towards its targets. For that, it's 100% ion thruster propelled. It does also have a set of 12 MR-103G variable thrust (0.9 N maximum) RCS (Reaction Control System) hydrazine monopropellant thrusters that launched with only 46 kg of propellants (read: total thrust of its RCS doesn't provide the spacecraft with nearly enough velocity change to control its trajectory with them), and it also uses reaction wheels (now two out of four still operational) as well as its three gimballed Xenon ion thrusters for attitude control. Actually, even its huge solar panels are rotatable, gimballed, even foldable / extendable, so it could technically also use that to change its orientation through change in center of mass, if all else failed and the power they provide at less than ideal angle towards the Sun would be a secondary concern. But only ion thrusters are used to provide the spacecraft with required change in velocity relative to its targets.

How is it possible? Very gracefully. Low-thrust but high specific impulse ($I_\mathrm{sp}$) propulsion calls for slightly different trajectories than high-thrust near-instantaneous (impulse) but lower $I_\mathrm{sp}$ thrusters. Their downside is that they are, as such, unsuitable for high-thrust applications such as launching off the surface of strong gravity bodies, landing, or any other applications where large change in velocity ($\Delta v$) is required in a short period of time (read: fast acceleration / deceleration), but their upside is that they are highly efficient with their reaction mass (Dawn uses only about a kilo of its Xenon propellant per week with all three of its ~ 90 mN thrusters), and can reach far greater total $\Delta v$ throughout their mission.

Dawn has recently began its approach to Ceres and will continue to thrust after leaving Vesta (with a slight delay due to problems with one of its reaction wheels) to roughly match the orbit of Ceres in speed, inclination, eccentricity, and do that so it also coincides with its orbital position around March, 2015. Its final approach trajectory has since also been changed (read: optimized) in a way that will allow it to circularize initial high orbit around Ceres faster, and use Ceres' own gravity on top of its ion thrusters to gracefully "fall" in a spiral path closer towards it. To do this, it will have slight hyperbolic excess velocity ($v_\infty$) with respect to Ceres as it passes it in its heliocentric orbit, and will then begin slowly to decelerate with respect to it. From one of Dawn journals (November 28, 2014): 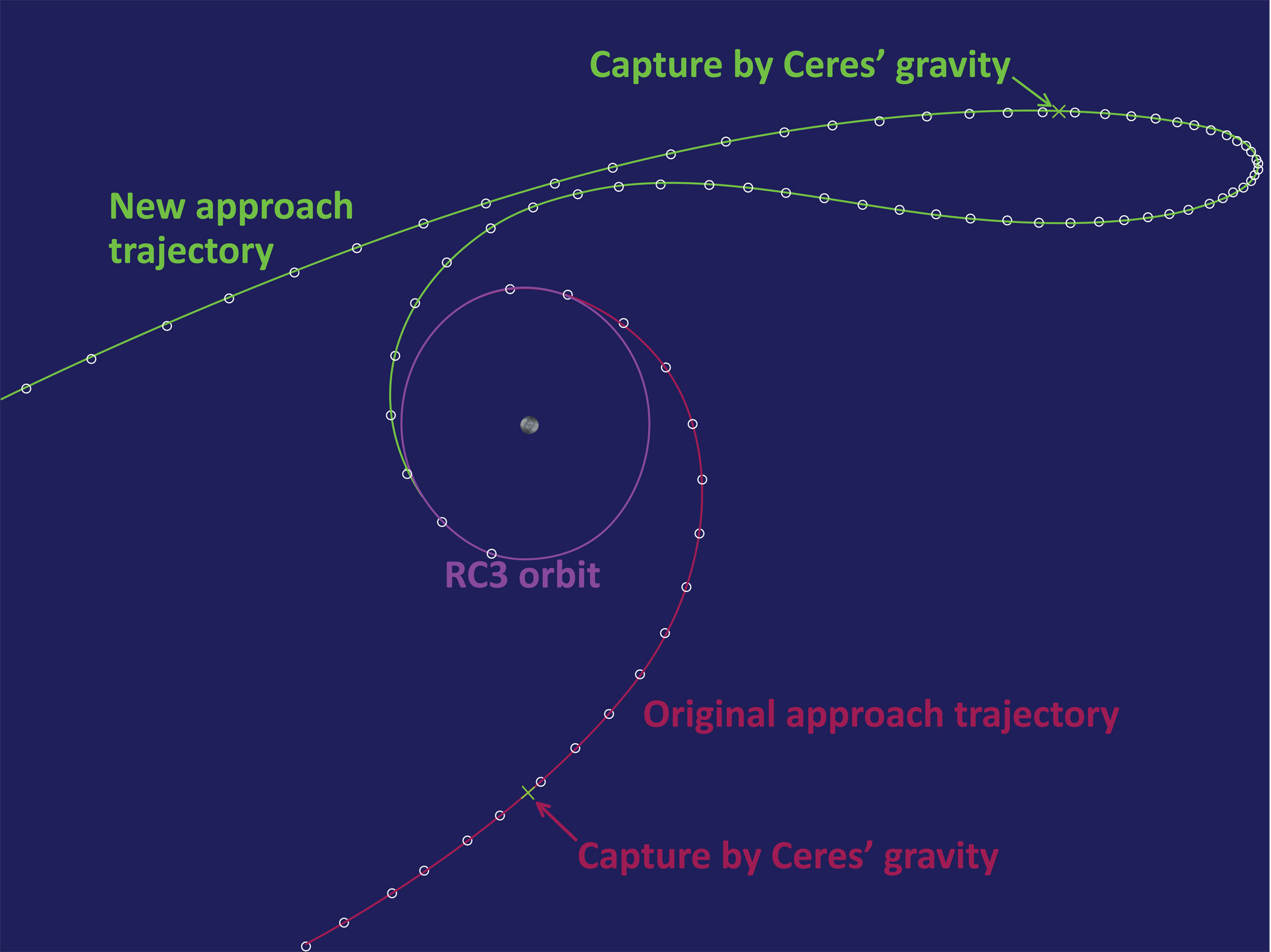 North is at the top of this figure and the sun is far to the left. Ceres orbital motion around the sun carries it straight into the figure. The original approach took Dawn over Ceres’ south pole as it spiraled directly into RC3. On the new approach, it looks here as if it flies in over the north pole, but that is because of the flat depiction. As the previous figure shows, the approach takes Dawn well ahead of Ceres. The upper part of the green trajectory is not in the same plane as the original approach and RC3; rather, it is in the background, “behind” the graphic. As Dawn flies to the right side of the diagram, it also comes forward to the plane of the figure to align with the targeted RC3. As before, the circles, spaced at intervals of one day, indicate the spacecraft’s speed; where they are closer together, the ship travels more slowly. (You can think of this perspective as being from the side and the previous figure as showing the view from above, off the top of this graphic.) Credit: NASA/JPL

New trajectory, by approaching Ceres from ahead of its orbital path, was chosen to reduce eccentricity of resulting orbit after orbital injection faster. Exact approach to Ceres, insertion into its high orbit (13,500 km), and later spiraling to a lower (4,430 km) orbit are all described in detail in Dawn Blog articles.

But the point is that all these changes in Dawn's trajectory are made far in advance to being within the Cererean Hill sphere (area around it where its gravitational attraction dominates over gravitational attraction of other celestial bodies) where large changes to its trajectory would be more prohibiting due to the time it would take to make them and not being able to counter gravitational pull (say, if trajectory was way off) with such low thrust available to it. So it approaches celestial bodies with grace, and such words as "celestial ballet" were used to describe this by Marc Rayman, Dawn Chief Engineer/ Mission Director.

Here is a simulation video of Dawn's final approach and injection into orbit around Ceres, just published by NASA Jet Propulsion Laboratory (JPL) via their YouTube channel:

Edit to add: For intricacies of Dawn's propulsion system and its celestial ballet through the Solar system and orbits around Vesta and Ceres, I can't recommend warmly enough watching The von Kármán Lecture on NASA's Dawn Mission to the Asteroid Belt. Dr. Rayman is a fantastic speaker and I'm sure his explanations will pull you in a lot better than I'm capable of. He answers a similar question to yours in the Q&A session following the lecture, roughly 1 hour and 3 and a half minutes into the recording.

The ambitious and exciting Dawn mission is one of NASA's most remarkable ventures into the solar system. After more than seven years of interplanetary spaceflight, the probe is just a few months away from the mysterious world Ceres. The spacecraft has already completed a spectacular exploration of Vesta. These were among the last uncharted worlds in the inner solar system prior to Dawn. They are the two most massive residents of the main asteroid belt, that vast collection of bodies between Mars and Jupiter. Ceres is so large that it is included in the category of dwarf planets, along with Pluto. The alien landscapes Dawn reveals provide humankind with a new perspective on the solar system. Remnants from the time that planets were formed, Ceres and Vesta hold clues that will help scientists understand the dawn of the solar system. Dawn orbited Vesta from July 2011 to September 2012 and returned astonishing views of this fascinating world. It is the only spaceship ever to orbit an object in the asteroid belt and is the first ever targeted to orbit any two extraterrestrial destinations. Such a mission would be truly impossible without the use of ion propulsion, a technology that has mostly been in the domain of science fiction. Dr. Marc Rayman will give a fascinating and entertaining presentation on the Dawn mission and its two exotic destinations as well as its use of ion propulsion. He also will share the excitement and profundity of controlling a robotic ambassador from Earth in deep space.

Dawn indeed uses its ion thrusters to enter orbit. From this PDF:

An additional 210 hours of IPS thrusting was used to enter the first Vesta science orbit, called Survey orbit, on August 3, 2011 at an altitude of approximately 2,735 km.

Not the answer you're looking for? Browse other questions tagged orbital-maneuver advanced-propulsion ion-thruster ceres dawn-mission or ask your own question.

8
Why does the Dawn spacecraft have three ion engines at different angles?
7
Why is Dawn in a much higher observation orbit than Rosetta?

15
Does the Dawn spacecraft have the potential for an extended mission?
10
What is the performance of ion thrusters in actual deployed spacecraft?
19
Dawn Spacecraft: Why are the orbits so high?
4
If the Dawn probe visits a third asteroid after Ceres and Vesta, which asteroid could it visit?
12
Xenon vs Hydrazine, "Should I Stay or Should I go?" Dawn mission decisions
2
Ceres gravity from spherical harmonics from Dawn, how to get the coefficients, definitions and potential?
7
Terraform via moving Ceres To Mars orbit, using ion drive
2
Which one of these Isp's for the Dawn spacecraft is wrong?
9
How does MEV use its "ion thruster on a stick" technology?
2
Can external plasma enter the chamber of an ion thruster?