Playing football in microgravity: is it hazardous for instruments?

In video documents where astronauts are in micro-gravity, we often see them moving objects without paying attention for the nearby instruments or buttons panels (either aboard spacecrafts or aboard the ISS). 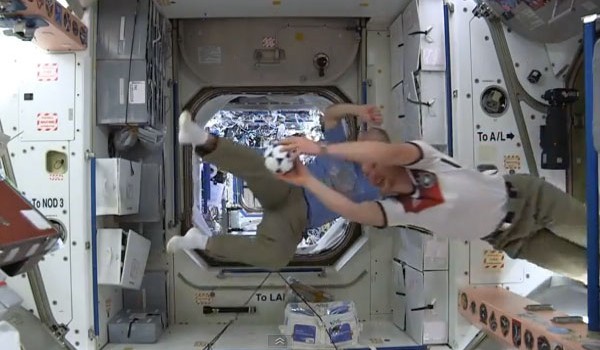 Why don't they fear those objects will move some switch or unplug some connector, due to:

I believe the kinetic energy of these objects is sufficient for such involuntary action.

Why don't they fear those objects will move some switch or unplug some connector?

Because none of the crucial switches aboard the station are installed without some sort of a safety mechanism, require multiple different actions to initiate them or aren't as easy to move out of position (such as rotating levers for bulkhead doors - sometimes, they would even be intentionally missing and you'd require a torque wrench to rotate it).

The image you attach to your question displays a few of such initiators. Some are recessed into the structure, include safety pins, are covered by protective (non-shattering, say plexi or laminated) glass or in own enclosure with access doors, need to be pressed or pulled then turned to lock in position, and none are touch or push initiated alone. And console controlled equipment can implement all kinds of other checks, including multiple confirmation buttons, entering access codes, need to be confirmed by additional crew, or as simple as checking with other system settings if a change to some of them even makes sense from a procedural standpoint or doesn't breach some safety standards and regulations.

Additionally, crew would be required to secure any equipment that could withstand damage due to any of their activities, as soon as they finish with their work on them. The so-called clean desk policy requirements are constantly in effect. These are pretty standard health and safety requirements in any hazardous work environments, and would be combined with a plethora of other regulations (the stations is still international and not all of its members would be allowed even physical access to just any of its consoles, and so on). Also, reboosts are scheduled and initiated by the crew aboard the station. They would all know when it's time to hold onto something and mind that sucker in the toilet because it'll soon go temporarily out of pressure.

And if astronauts forget themselves or get too excited during some such activities, they're also constantly monitored by ground control (not as intrusive as it might sound, but in common crew quarters and laboratories there are cameras, microphones and so on ... but they do get to do number one, number two and sleep without constant CCTV monitoring), and they can always remind them to play nice, no foul-play and to mind that rack with lettuce. :)

Not the answer you're looking for? Browse other questions tagged microgravity impact movement or ask your own question.

12
Are there any drawbacks or potential dangers on using touch-sensitive instrument panels on spacecraft?