How do we know that Voyager's data is correct?

I was wondering for some time how we know that the scientific data received by the Voyager spacecrafts are correct?

Specifically, I'm wondering about the recent "tsunami-wave" (frequency of ionized matter) detected by Voyager1 - couldn't it just be a malfunction of a 37 years old instrument?

Or also the impressive data about the edge of our solar system, which were recorded in 2011 (they detect a linear decrease of ion velocity over a few years) and in 2012 (where they show that they found - unexpected - that even with rotating the spacecrafts plasma sensor, they find no flow). Could this also be explained by a broken plasma detector which lost sensitivity over the time of a few years, up to zero?

I'm not questioning these results, I'm sure NASA scientists do an excellent job, I just want to understand how they distinguish between those scenarios. Those data are important as it would take quite a few years until they can be verified by other spacecrafts (when will voyager 2 reach that level? Or New Horizons?) - and until that time, Voyager1's data are a main-source for our understanding of the edge of the solar system.

This may answer some of your questions, but not all. Additional information may exist in the book.

Also take into account that both Voyager spacecrafts could perform the same measurements before they diverged. The results could be compared.

Following excerpts are from the book Deep Space Craft: An Overview of Interplanetary Flight, Dave Doody, Springer Science & Business Media, 2010, parts of which are available in the free preview (use chapter links to the source of the two excerpts):

[...] A potential source of error in the magnetometer instruments’ measurements is the amount of twist in the long fiberglass magnetometer boom established after deployment. To compensate, a magnetic coil, which can be energized on command to create a magnetic field of known strength and orientation to calibrate the instruments, is mounted on the spacecraft.

Scientific measurements are made by using instruments that have quantifiable error. Calibrations are carried out by instruments on a spacecraft to acquire baseline data for comparison with an actual observation, thus allowing instrument errors to be quantified.

Prior to carrying out an infrared spectral measurement of a target, the IR spectrometer will be aimed toward a spot of deep space free of any bright objects in its field of view. An absolute reference value is obtained, and any defects in the instrument’s sensors can be recorded and later included in data analysis.

For the same reason, radio science experiments always begin and end with a measurement of the spacecraft’s unobstructed, unmodulated radio tones lasting tens of minutes before and after encountering the target.

Many imaging instruments may be aimed toward a special calibration target mounted on the spacecraft bus. Voyager’s calibration target was a rectangular plate mounted below the bus (see Appendix A, page 294) coated with a material of known grayscale and albedo values. The spacecraft’s scan platform could aim the cameras so that the target plate would fill the field of view for calibration.

The same target plate on Voyager serves as the thermal radiator for the spacecraft’s electrical system regulator, so Voyager’s infrared instrument, the infrared radiometer-spectrometer (IRIS) could be calibrated.

The operation of every science instrument and experiment includes some sort of procedure or other means for calibrating its measurements. 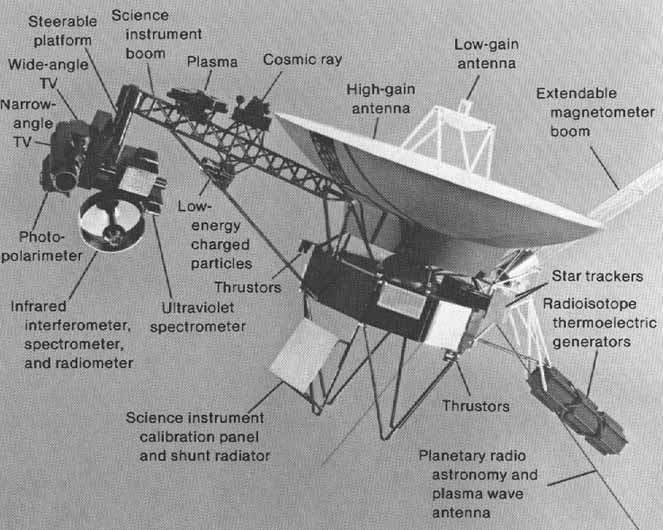 Not the answer you're looking for? Browse other questions tagged probe voyager solar-system scientific-data reliability or ask your own question.

13
Does cosmic dust pose a problem for long-term satellites, telescopes and probes?
13
What's the public availability of data gathered by NASA probes?
8
How much do we know about minerals and raw materials that are in our solar system?
8
Is there free, accurate and updated data on planetary body positions in the solar system?
5
Is data from Huygens still being analyzed in 2018?
6
How was the radius of Venus measured so accurately (± 3 km) via radar in the mid 1960's, before Venera 4 and Mariner 5?
3
Did Voyager 1 and 2 record while not near any planets to get "ambient mechanical noise" for smoothing?
3
How are Voyager's 16 thrusters oriented? Table that enumerates them and specifies directions quantitatively