How does astronaut activity from within affect a spacecraft?

Can physical activity from within a space craft affect it somehow? For example if somebody on the ISS performs repairs involving a lot of hammering, would it perhaps affect the station's orientation a little bit? The vibrations can't be a good thing at any rate.

Also, how about the act of simply moving around inside the craft?

Edit: Are any changes substantial enough to require the ISS or other craft to correct them every now and then?

This video may help to answer your question. Starting at about 00:24, you can see an astronaut running around the "exercise wheel" of Skylab (an early NASA space station program, which followed the Apollo moon landings). Basically after some time, NASA told the astronauts to stop running around like this because it was causing more propellants to be used to maintain Skylab's correct attitude (orientation) in space (at least this is what I've been told...it would be nice to find a reference to back this claim up).

Anyways, the short answer is yes, an astronaut's physical activity within a spacecraft can absolutely affect its orientation and even its orbit. As to whether it is a large or small effect, this depends on the amount and type of activity and (most importantly) the size of the spacecraft. Even on the ISS, however, astronauts are instructed to avoid or even stop altogether some activities because they can have an adverse affect on the amount of propellants used for attitude control (I have some memory of such instructions during my time working in the ISS Program). Another issue is that an astronaut's activities can affect the microgravity experiments being conducted on the ISS. These are typically conducted over a specified period of time, so an astronaut may be instructed to avoid motion in a certain part of the ISS for a certain period of time, in order not to disturb a particular experiment.

It's not really a simple matter of analyzing starting and ending velocities of an astronaut and assuming that the net change is zero. If you think of it in terms of kinetic energy, an astronaut is all the time transferring small amounts of kinetic energy to his or her spacecraft (the energy being converted from chemical bonds in the food he or she eats into kinetic energy from the work his or her muscles do). Changes in kinetic energy, of course, imply a change in velocity [E = (0.5) m * v^2]. On average, these velocity changes most probably cancel each other out, if they are not applied in a consistent direction. This is why there is no large overall change in a spacecraft's orbit due to these motions. However, the motions can absolutely cause small changes in the orientation of the spacecraft, and these are most often controlled by an active attitude control system (usually small rockets that fire in small bursts to counter unwanted changes in attitude).

I will add, however, that these effects (i.e. astronaut motion) are probably not the largest source of attitude disturbance on a spacecraft. I'm not really an attitude control expert, so I can't tell you the relative magnitude of the different disturbances, but one of the largest (for low Early-orbit spacecraft) is actually aerodynamic drag, caused by the thin layer of atmosphere present at such altitudes.

Internal activity, other than activation of the drives, will have minimal effects.

If everyone goes into one round area, and starts running the walls, the walls will (slowly) start to rotate the opposite direction; this may not be exact, due to the station wanting to rotate upon its own center of mass, but it will attempt to rotate as close as it can to opposite.

If action internal generates significant localized heat, the radiation of that heat from the nearby exterior walls will provide a very tiny thrust. For comparison, the asymmetric thermal loads on the Pioneer probes were sufficient to generate 400km/year off-coast position differences; that's 8e-10 m/s² (0.8 nanometers per second per second).

Note that this force is dwarfed in the inner system by other interactions, but is a real effect that crew could cause.

Any kinetic acceleration from kicking off one side is canceled by impact with the other side, save for the very very tiny amount converted to heat by friction with internal atmosphere. But, to reset for additive, you're knocking about the same amount off in the other direction, for a long-term net of 0 acceleration (excepting asymmetric thermal loading).

Physical activity can absolutely affect a space craft from within, and measures are taken to mitigate the effects.

There are a few exercise machines aboard the International Space Station that the occupants use to stay fit and maintain bone strength: the Advanced Resistive Exercise Device (ARED), Cycle Ergometer with Vibration Isolation and Stabilization System (CEVIS), and the Treadmill with Vibration Isolation and Stabilization System (TVIS). Those are all really fancy names for a weight lifting machine, an exercise bike, and a treadmill.

These machines are not bolted to the wall because they do not want to add any unwanted vibration forces to the solar arrays. Sunita Williams provides a great explanation in her departure video:

She goes on to demonstrate the ARED at 13:26 which also "floats" around. 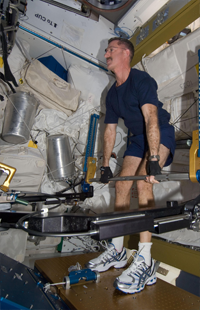 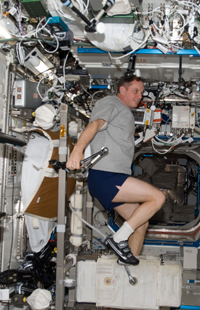 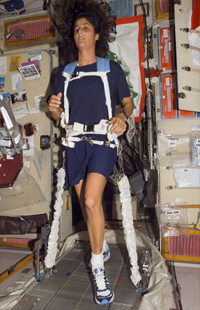 All images courtesy of NASA. Click any of them for full resolution

Not the answer you're looking for? Browse other questions tagged iss space-station attitude physical-activity or ask your own question.

17
Did the ISS have to adjust its course when the SpaceX Dragon capsule was detached?
13
Did NASA tell the Skylab astronauts to "Stop running around!"?
7
Do crew movements or movement of other objects ever affect space or Earth observation experiments staged on the outside of ISS?
5
Why did Skylab have a thick blue flexible cord running down its central axis?
3
How many times would two astronauts have to run around Skylab to turn it by 10 arc minutes?
3
What's the longest time that an astronaut remained in free fall?

14
How does an astronaut pack for the ISS?
3
How does a spacecraft know its orientation in orbit?
6
How well could the ISS attitude control system detect periods of astronaut activity?
32
Has the ISS ever not had a lifeboat?
21
How best to maneuver inside a large room within a space station using only arm and leg motion?
10
How big are the tidal accelerations within the ISS?
1
Does gravity affect sweating?
6
Displaying spacecraft attitude from rotation matrix or quaternion?