What is the approximate influence of atmospheric drag on the cost of rocket launches? Is it beneficial to have launch sites located at higher altitudes?

Cape Canaveral is at sea level, but I've noticed that Chinese launch sites are located on quite high altitudes (although they could still be higher if located in Tibet).

I'll give you the numbers. I'm breaking this up into 3 different terms. There's atmospheric drag, what I'll call the "hover" term, and the gravitational potential climb. I will more or less assume a flight directly up. You're welcome to use whatever term for velocity you want, as none of them will be representative. I'll take the Shuttle's speed at halfway to max Q. This is 1000 ft/s, or about 300 m/s.

You would think atmospheric drag would be very difficult. It's actually not. In any case, you would probably use the v^2 relationship for drag. But if you think about where that comes from, it basically assumes that all the air in front of you is accelerated to the speed of your craft (minus any departure from unity in the drag coefficient). So for a good approximation, just take the mass-thickness (I call mu) for the entire atmosphere, and multiply by the metric for velocity.

Also, I'll use the numbers for Falcon 9, which is a diameter of 3.66 meters and launch mass of 333,400 kg. Yes, a lot of these numbers change over the course of the flight, but in ways that are fairly obvious if you changed this to do numerical integration.

Wow. That is not much. Maybe velocity should be higher. But still, out of 10 km/s total, this is a tiny amount. Atmospheric drag complicates launches, but not much because of its Delta v value.

Next, the "hover" term. This represents the gravity drag. Again, I'm forced to assume a pretty much upward launch. I'll also compare sea-level to Mt. Everest, at a height of 8,848 m. Not that you'd set up a launchpad there, but we need this to answer the question.

Now this is much more significant. This isn't all of the gravity drag either. It's still sucking your delta v budget after you're out of the atmosphere, until you get to full orbital velocity.

Let's move on to the gravitational potential itself.

The sum of all these is a ballpark estimate of the benefit you would get from changing your launch location from sea-level to Mt. Everest. Honestly though, you save a comparable amount just by moving it down to the equator, where the Earth's rotation gives you a bigger boost.

Anyway, this is 616.7 m/s out of a total budget of 10 km/s. So it would be less than 10%. By the rocket equation, this can still make a difference. But then again, actual costs are complicated.

This makes a lot of assumptions, but let's just assume you could scale linearly the mass of the Pegasus. That would give the rocket a mass of 27000 KG to lift the payload of the Falcon 1. That is a difference of 40% roughly. Why the difference?

Bottom line is, raising your altitude of your launch site will give you an increase in performance, both by increasing your engine efficiency, and reducing your drag. These numbers wouldn't be as drastic for a launch site of 10,000 feet, but they still would represent a measurable change in performance.

The flight path of a rocket is barely focused on 'up'. It is easy to get high enough to where orbit is possible. Consider the case of sounding rockets, which even smaller organizations or amateur rocket groups can achieve.

The hard part is going fast enough to orbit. I.e. Getting up to speed.

Thus a rocket typically heads straight up quickly to get out the thick part of the atmosphere and then turns and primarily accelerates to orbital speed.

Starting from a higher altitude would be minorly helpful (I cannot quantify the number, alas) for the very first few moments of flight, but after that would be of little benefit.

As noted in the comments the extra cost of logistics for getting fuel, oxidizer, parts, and payloads to the higher altitudes would mostly likely not be worth it.

I like the accepted answer, but it is a little abstract and I want to add to it with some visuals and more representative numbers. I created a crude launch sim and tracked the drag, gravity, and steering losses (for a sea level launch): 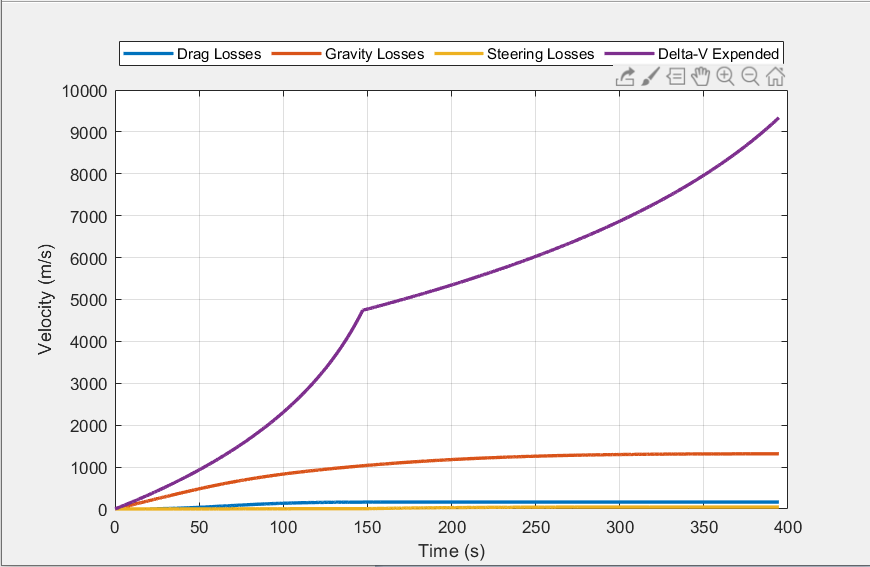 Edit: original version of this graph (and table) has some bad math on the steering losses, this has been fixed.

This shows that drag is indeed a very small loss factor, even for this crude simulation where the drag losses are amplified (by ~50% is my guess [1]) because I did not program a throttle down (Max q be damned).

Here is a comparison with a higher elevation launch:

So a little over 1% for the first question and for the second; the physics says yes, higher is beneficial, but the economics and logistics say no.

Not the answer you're looking for? Browse other questions tagged launch rockets atmospheric-drag atmosphere high-altitude-launch or ask your own question.

5
Why launch from sea level and not Denver?
4
Why rockets are launched from sea level and not highlands?
4
Launch from the top of high places
5
How much cheaper would a high level launch be from a sea level launch?
4
Launch altitude and fuel cost
0
What is the effect of launching from higher altitude on fuel burn and rocket performance?
11
Have all spacecraft on record been launched from land?
5
Shapes of rockets on the Earth with no atmosphere
4
How much thrust to launch a regulation size FIFA soccerball into orbit
6
If money weren't an issue, what's the best way to get maximum mass to LEO in 1 year? 5 years? 10?
See more linked questions

9
Quite some lateral wobble immediately following Antares Orb-2 liftoff. Is that normal?
10
How do rocket propellant combinations rank in terms of "brightness"?
1
Atmospheric drag effect
6
What is 'triggered lightning'?
25
Which has been the most gregarious rocket, launched from the most sites?