What is the largest naturally occurring body that could be hollowed and safely lived in?

Some proposals for living in space envision finding an asteroid that is a solid chunk of something (i.e. Nickel Iron), hollow it out, slap on an air lock, and you have a home. Add a drive and you have a space ship. Of course the reality is a little more complex, but the idea has merit.

Putting aside, spin and thrust forces (way too many variables for a simple question), what is the largest naturally occurring space body that we know of or can reasonably hypothesise the existence of that could be hollowed, filled with air at a human comfortable range, and lived in?

It is easy enough to image an asteroid that is essentially the iron core of a planet, so it reasonable to assume that could be an option. Also a planetoid at or near the size of our moon could conceivably have a core that was cooled sufficiently to tunnel to the center of and create a hollow. Our Moon being in orbit around Earth, has significant tidal stress, (likely keeping the core warm) so would not be a candidate. Though an identical body in a solar orbit, or interstellar trajectory, might be a candidate.

Edit to Clarify Scope I was thinking, with a planetoid in a significant gravity well (like the moon or earth), all the mass would be left on the body. With a small body, “mined” materials would likely be sold or ejected. Some materials from the body or outside source would be used for sealing & supporting. For this question I define hollow as allowing essentially an obstructed view of the interior, as would be the case with a Dyson Sphere. Cross supports would be practical in a small body of a few hundred meters, (though would violate the definition of hollow as used here). For a hollow measured in hundreds of kilometers, cross braces would be impractical for the same reason that a space elevator is impractical; there are no reasonable means of spanning with sufficient strength, without resulting in honeycombing or tunneling.

Any large body where you can survive on the surface to begin with can be used for caves, artificial or natural. This observation isn't off-topic because you ask about holding in atmospheric pressure. Moon caves can hold 1 atmosphere of pressure about 60 meters below the surface with no stresses on the surrounding rock. I'm using very simple math here. If you assume a density of 1 g/cm3, then 10 meters head of water is needed to get 1 atmosphere of pressure. The moon has 1/6th the gravity of Earth. QED.

This is possible on many bodies. It's possible on Ceres, Vesta, even. But as we decrease the mass of the body, the cave has to get deeper to maintain 1 atmosphere of pressure. The gravity in the living area also decreases (obviously, because it's a smaller body). So there's only a limited set for which this would make sense. Plus, many bodies have an atmosphere to begin with, so caves are either supplementary or useless there.

One of the most compelling places for caves is Mercury. This is argued very well by Jim Shifflett. I don't mean that in the sense that a Mercury colony would be preferable to Mars or the Moon (although there is apparently disagreement on that count), but I do mean that caves are the only way to set up bases on Mercury.

Let's return to the idea of Ceres. Its central pressure is something like 200 Earth atmospheres. Gravity increases roughly linearly with radius, so your caves would be roughly 1/400th of the dwarf planet's radius under the surface. You might also be swimming, but that's a separate topic. What happens when the object is so small that the cave would have to wind up in the center?

Well, to begin with, you would have zero gravity. According to the shell theorem, gravity would cancel out perfectly due to the rock of the asteroid itself. There is a particular size at which the center is naturally at 1 Earth atmosphere exactly. This puts you at an asteroid of a diameter of about 20 km. Many objects of this size are well cataloged, and we know a decent amount about them. Gaspra is an example. It is also not round. Now, onto that subject...

There is room for debate as to whether the requirement of no structural forces is a reasonable one. This is the topic of Planetary differentiation. Many asteroids are rock, forged in the interior of a larger body, and they only separated because of collisions. That means they could have been formed of molten materials under lots of pressure, making a fairly cohesive body. This is actually fairly common. The limit for differentiation is generally thought to be well above the 20 km diameter point, and likely closer to the 100s of km range. This we know from studies of moons. We have relatively less information about free asteroids because moons have historically been a more obvious type of object to study, and their sizes are shifted more towards larger sizes.

So to sum up this rant, let me establish this:

Q: could you empty the center of a 20 km size asteroid and fill it with gas?

A: It would leak out, but if you kept it from leaking out the laws of physics tell us definitively "yes".

Q: could you empty the center of a 20 km size asteroid and expose it to the vacuum of space?

A: It might collapse in on itself, but we don't know for sure. It lies near the boundary of required material strength. It would also depend on the size of the cavity you carve.

There are also some obvious arguments of scale that follow. For instance, could you hollow out the center of a 1 km asteroid and expose it to space without collapse? Sure. We have pretty good odds of that working, because that's only fighting its self-gravitation. That fact that much larger objects are undifferentiated means that odd-shaped structures of km-scale can hold against their self-gravity. But "can" is different from "will". This is what you need the civil engineers for.

So let's get ridiculous. What if I took a 20 km size object, started hollowing out the center, filling it with a sealed pocket of air... and I just kept going? How big could I go before it collapses into a big mess? Well, there is no limit, per se.

You have the problem of natural differentiation - that works against you. It wants to upturn your air bubble, putting low density (air) on the outside and high density (rock) in the middle. But it's not differentiated to begin with, so that's not going to happen very easily. So say you've hollowed out nearly a 20 km diameter air bubble in the center. Now you've moved almost all of the rock, breaking it up into little pieces. Well, studies of asteroids have established tumbling angles on the order of 7% to 14% rise-to-run, the same for sand piles on Earth (not surprising). You could avoid steep angles while rearranging the rocks, although the idea of dynamical failure is still terrifying. So it's possible that you could corral material to hold in a very large volume of air - all with no material strength.

There is the detail that the naturally supported pressure changes with the size of the air bubble. But this follows very predictable math, which is trivial to work out. The only real limit is when the air volume becomes so amazingly massive that the gravity of the air itself limits the habitable range. Someone wrote a sci-fi book about this exact very thing.

Now there are two major flaws in the vision that this author painted.

This is all very fanciful thinking. There are only 2 objects in the entire inner solar system that could hold breathable air in their center to begin with - Eros and Phobos. And even that would be thin, Oxygen-rich atmosphere (like Skylab).

It might be that producing breathable air in the first place is a greater challenge. Near Earth asteroids are all far too small for the crazy scheme I described. But they might also lack sufficient Hydrogen and Nitrogen. Getting the materials for life would require infrastructure to begin with. If you need a place to park those gases you produce, it shouldn't be too hard in the cosmic sense.

I'll get back to the question:

what is the largest naturally occurring space body that we know of or can reasonably hypothesise the existence of that could be hollowed, filled with air at a human comfortable range, and lived in?

The issue is that large bodies have a central pressure that's too high for humans. If your limit is about 3 Earth atmospheres (a reasonable biological limit), the largest body would be something like 132 Aethra, an unassuming body on the inner edge of the asteroid belt. If you made the center air bubble large enough, however, that pressure would drop.

Putting this another way, Pluto and Ceres are certainly too large.

Vesta and Pallas may be too large.

If you want to impose the additional constraint of wanting to spin whole body for artificial gravity, then the body you should be looking for must be primarily metallic (ceramics/rocks are weak in tension).

What this means, is you should be looking for the core of disrupted planetoids, bodies like Vesta but smaller would be ideal. This table of measured asteroid densities indicates the following asteroids might be particularly good candidates: 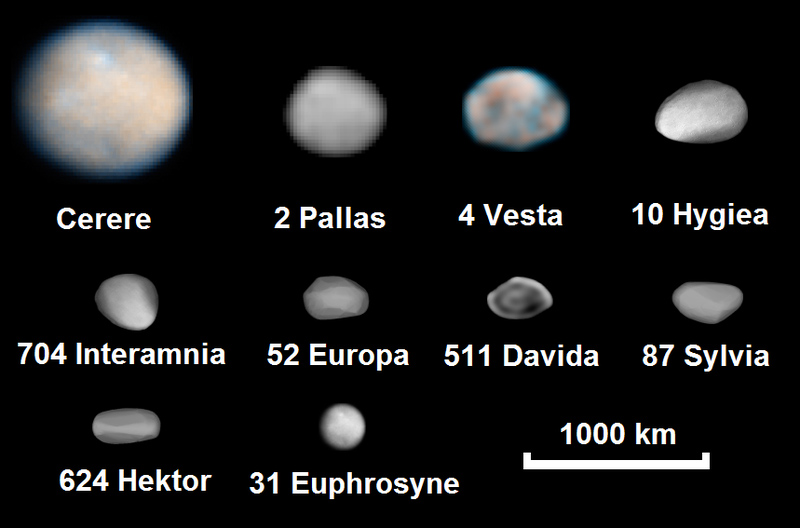 Not the answer you're looking for? Browse other questions tagged interstellar-travel asteroid space-station colonization or ask your own question.

1
Would it be possible to make a bubbleworld in an asteroid?
14
Could permanent self-sustaining biodomes be built on Mars?
9
Are there any designs for a Mars Habitat made out of stone?
9
Where could you go in a 20km iron asteroid?
3
Could ice be used to create a habitat or space station?

11
Mission concepts for a tomography of an asteroid or other celestial body
59
What resources could be gained from asteroid mining that would be worth the effort?
13
Are there any resources available on the moon that could make a base commercially viable?
7
What was/is the Minor Body Exploration Forum?
11
Would a 'space elevator'/sling on a rotating asteroid work?
3
What is the closest to a perpetual motion machine that could be made to work in space?