Does the moon have a name?

Is there any scientific name for "The Moon", Earth's satellite, when talking about it apart from, but in context of, other moons? Google simply states that

Earth's only natural satellite is simply called the moon because people didn't know other moons existed until Galileo Galilei discovered four moons orbiting Jupiter in 1610. Other moons in our solar system are given names so they won't be confused with each other.

It seems sort of dumb to just call the moon "The Moon" because we never had a classification for what it is/was. I'm guessing it has some sort of astronomical name. The main difference between The Sun and The Earth and their English naming conventions is that we don't call other planets "Earths" and other stars "Suns", at least not in a scientific sense; we tend to use it informally rather.

So, does The Moon have an agreed upon international astronomical name, such as Luna or something like that? And while we're at it, there must also be a name for "The Sun" (It might be Sol) and our solar system?

It has many names, depends on who you ask. In English, one name for our moon is simply the Moon. Notice the article the and the capitalization making it a proper noun. This is similar in convention as the Galaxy for our own galaxy that is otherwise also known as the Milky Way. But the word galaxy actually already implies something related to milk in Greek anyway (galakt / γάλακτ = milk), so some linguistic purist frown upon the use the Milky Way galaxy as redundant.

Another name for our moon could be Luna by the ancient Roman deity that is, according to ancient beliefs, embodiment of the Moon. Roman / Latin names for celestial bodies (and sometimes their adjectives) are frequently used. In fact, we all know e.g. the planets Mars, Neptune, Venus,... by their Latin names for a god of war, god of fresh waters and the sea, and goddess of love, respectively, and less frequently use their Greek equivalents Ares, Poseidon, and Aphrodite.

And the Moon / Luna is known by many other names in other cultures. For example, in Greek mythology, it would be Selene, goddess of the Moon, or rarer, Cynthia or even Artemis, both the names of the Greek goddess of the hunt, forests and hills, the Moon, and archery. Obviously, this implies another name for the Moon - Diana, the Roman goddess of the hunt, the moon and birthing. And, say, Chinese equivalent would be Chang'e, their mythological goddess of the Moon (relevant to space exploration since the China National Space Administration chose this name for their lunar exploration program, and you might have heard of some of the Chang'e lunar orbiters and landers, e.g. the Chang'e 3 that delivered a small rover named Yutu, in English Jade rabbit, to the Moon). The list could go on, as evidenced for example by this Wikipedia's list of lunar deities.

So, when it comes to terminology and naming conventions (nomenclature), you should never neglect to mention what language, culture and use you're interested in. I know you did, I'm just trying to additionally emphasize that it makes a difference. But, to cut the long story short and answer your question more directly:

Does The Moon have an agreed upon international astronomical name?

Yes. The Moon. And this is the English language naming convention recommended by the International Astronomical Union (IAU):

The IAU formally recommends that the initial letters of the names of individual astronomical objects should be printed as capitals; e.g., Earth, Sun, Moon, etc. "The Earth's equator" and "Earth is a planet in the Solar System" are examples of correct spelling according to these rules.

Additionally, if I may, what you posit in the penultimate paragraph of your question seems somewhat flawed. There is a distinction between a sun and the Sun in that while they both suggest a star that is a parent to planets, i.e. a planetary system and not merely a star, the former form is both frequently used (saying, e.g., "This planet has two suns because it orbits a binary star." would be perfectly acceptable, why not?) as well as both being distinct enough with the use of articles a or the, so they cannot be ambiguous with proper use.

If it helps make a difference, here's a quote from Curious About Astronomy post on What are the names of the earth, moon, sun, and solar system?:

Notice that I capitalize them, because when used as names, they are proper nouns. This also helps us distinguish between the planet Earth and earth (meaning soil), between the Earth's Moon and moon (meaning the natural satellite of a planet), and between our Solar System and any other solar systems (since any system containing a star and a planet or a planet-forming disk can be called a solar system.)

The Wikipedia page you quote seems only partially correct and neglects to mention capitalization of proper nouns. Which is somewhat amusing considering its own page on proper nouns clearly stating:

In English and many other languages, proper names and words derived from them are associated with capitalization;

Because the moon was so well known before international agreement on astronomical naming was a thing, different languages have different words for it. In English it's "the Moon"; in the Romance languages it's usually "Lune" or "Luna" from the Latin. The modern dominance of English and the historical dominance of Latin in scientific communities pretty much guarantees that either one is recognized, and there's no particular reason to force people to use one or the other.

Then Galileo (and/or Simon Marius) discovered Jupiter's satellites. They are things related to Jupiter the same as The Moon is related to Earth. So, each one of them is like a Moon, but orbiting Jupiter instead of Earth.

Quickly, saying something like that "Io is like the Moon, but orbiting Jupiter", was reduced to the similar, but quite different "Io is one of Jupiter's moons". This means that the noun moon had its meaning changed. It used to denote solely to Earth's Moon before, and then it started to denote a satellite of a planet.

The same change of meaning happened to the noun sun also. And the same for solar system.

To disambiguate that in a pedantic manner, you should use the noun satellite or natural satellite instead of the noun moon to refer to unnamed, unspecified, generic or collective entities orbiting planets, including Earth's Moon itself, reserving the word Moon just to Earth's natural satellite. The same for star and Sun and for planetary system and Solar System. This also returns the terms Moon, Sun and Solar System to their original meanings.

However, even if you start to disambiguate the terms in a pedantic manner, returning to the original meaning, don't expect that other people would follow you. Calling Io, Europa and Titan as moons is easy and common, even if it is in truth a potentially confusing and possibly wrong name-bending and using the term satellites would be the correct.

Your question stems from using the word moons but not earths or suns. This is really a question of etymology, and to understand how we got to this point you have to put yourself in the perspective of the ancients.

To begin with, you point out that planet and star are generic names for the kinds of objects that the Earth and the Sun are. Not using Earth or Sun for the classes of objects is quite understandable, since there was nothing to indicate that the Earth and Sun were instances of these types. So a star (to use the word how it has eventually evolved in modern English) was something entirely different from the Sun and the Moon, and a planet was just a special kind of star: the word is derived from the Greek word meaning "wander", since these stars moved through the sky relative to the other stars.

The Sun and the Moon were not members of a class of objects; they were two objects with names, and if there was anything else like them out there, we didn't know about it. Their names express the role they played in human activity. Sun (along with its cognates throughout the Indo-European languages, including Sonne, zon, sol, soleil, etc.) is derived from a word meaning "shine". The Sun is that bright thing that shines, lighting up our world. Moon is derived from the same root as month, ultimately deriving from a word meaning "measure". The Moon was (and sometimes still is!) how people measured time, and a major unit of time is how long it takes for one cycle through its phases.

Nowadays we know that the Sun is the closest example of the stars we see. But we already had the word star, so we just kept using that.

Nowadays we know that there are other objects orbiting stars like Earth does. But we already had the word planet, so we just kept using that.

And now we've learned that other planets can have objects orbiting them like our Moon does us! But this is brand-new; no ancient had any idea about this moon-planet relationship. So with no other word to turn to, we just repurposed Moon as a common noun meaning "Moon-like object". (NB: this repurposing came at approximately the same time as extending the meaning of satellite to refer to these celestial bodies. But satellite has taken on a more general meaning.)

I just happened to have run across this, and remembered your question. In a database that contains A LOT of moons (in the solar system), They have added "Luna" for potential disambiguation - just to be sure I think, since they have dropped the pronoun "The" here. 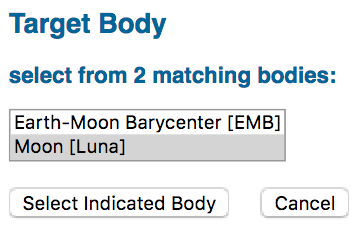 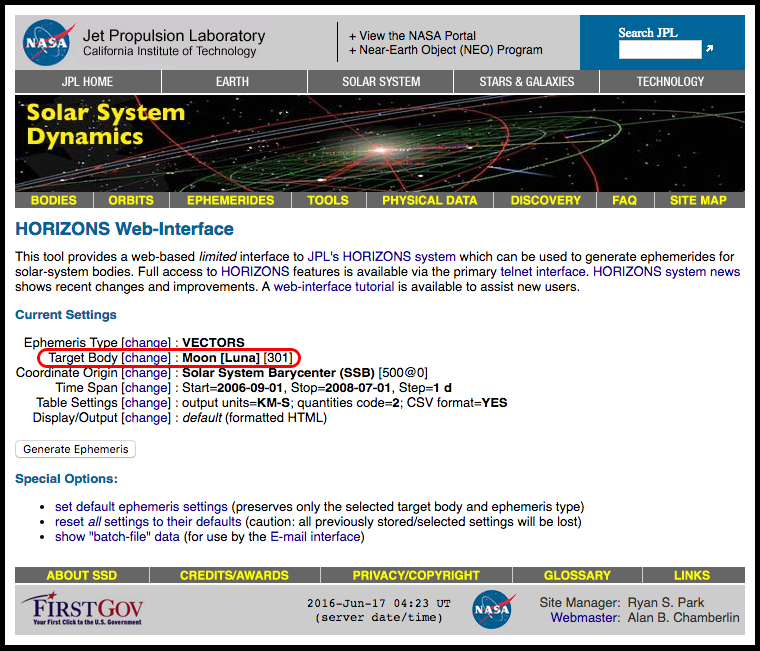 Not the answer you're looking for? Browse other questions tagged the-moon terminology or ask your own question.

20
Escaping moons conflict with what I understand of gravity
5
Drone Racing on moon
14
How do apsides of celestial bodies get their names?
6
What is the significance of the name "Jade rabbit"?

1
Does China have the most aggressive moon exploration plan as of 2013?
6
What is the significance of the name "Jade rabbit"?
11
What's the name of this maneuver for unlimited delta-v?
3
Why does Pluto have a molten core and the Moon does not?
18
Does the Moon have any captured objects orbiting it?
8
What does the abbreviation "MS" for the current Soyuz version name mean?
4
Is Dawn's upcoming low periapsis orbit for XMO7 "resonant"?
3
Name for point in a satellite's orbit around a planet when the satellite is furthest from the sun
25
Name for geostationary orbit around another planet
0
Does the elliptical orbit have many periapsis points?