Would it not be easier for SpaceX to make their first stage only partly reusable?

Very excited about the upcoming test to land the first stage of the next Falcon 9 on an ocean platform. Elon Musk & Co. make it sound incredibly difficult though.

I'm assuming that the first stage of the Falcon 9 could potentially be split into 2 parts:

Wouldn't it be much easier to just dump part containing the fuel (Assuming this part would be relatively cheap), and only try to land the smaller (And presumably more expensive) section?

See my sketch below: 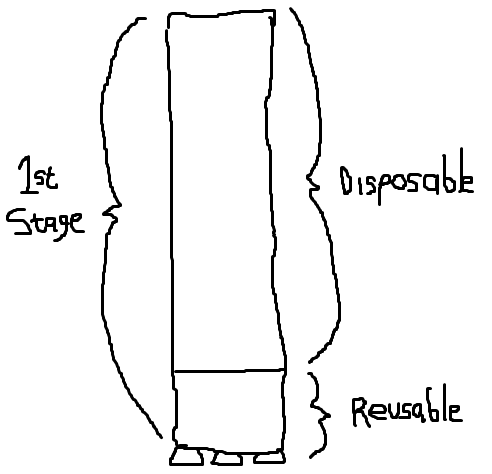 There are several problems with your proposal:

You need fuel to land the engine section, so in your proposal the stage would need two sets of fuel tanks: one disposable set and a second, smaller set that stays with the engine. This (plus the separation mechanism) makes the first stage much more complex.

I suspect the empty tank also helps the stability: the first stage has most of its weight at the bottom, which is the most stable configuration. The engine section would have its center of gravity halfway up, which makes it more likely the stage will start to tumble.

The fuel tanks are mostly empty space, but they are made from spacecraft-grade alloys and are welded on expensive machines. This is not a coke can you're throwing away. If you're going to reuse the first stage, it makes sense to reuse as much of it as possible.

If you remove the tanks, you reduce the weight by at most half, so removing them doesn't make the landing much easier. They have plenty of power available to land the weight. The complexity is in controlling the descent to land in exactly the right spot. By making the stage more stable, the fuel tanks actually help make the landing simpler.

Let me add a few details that tears apart the justification a little more. But I'll have to introduce some speculation about the motives of reusing only part of the first stage, then I can go about tearing them down:

I will argue that the real effect of both of these are actually opposite of the intention.

One analogy is that that balancing the first stage is like balancing a baseball bat on the top of your hand. But I think this ignores several aerodynamic factors. The center of gravity is higher with the top of the tank attached, but the center of pressure also moves in a stabilizing mode. If you drop a pipe with a weighted end, then the natural forces will tend to keep it upright. This doesn't change the need for active control once you fire the engines, but you need that anyway.

Also, regarding the point #2, consider the following:

"Grasshopper touched down with its most accurate thus far on the centermost part of the launch pad," SpaceX said. "At touchdown, the thrust-to-weight ratio of the vehicle was greater than one, proving a key landing algorithm for Falcon 9."

When the first stage lands, its thrust to weight ratio is greater than 1. If that sounds crazy to you, you read it right. As such, it would actually be more convenient to have the stage weigh more when it lands. Saving mass at this point isn't a benefit, it's a detriment. You can't throttle the engine down enough to get a perfect hovering type of landing. If you shed more mass, then you'll have to hit the ground harder, and with less margin of error.

TANGENT: This scheme doesn't make any sense for the first stage, true. But maybe it makes sense for the 2nd, or final, stage? If this rocket reaches orbit, then you have a big problem for making it back in through the atmosphere and propulsive reentry is going to be decimated by propellent budget. As such, I think there is growing acceptance that final stage re-usability can not be anything like first stage.

Speaking extremely speculatively, a fix for this might possibly be to reenter some of the final stage's hardware inside of a capsule and heat shield sent up separately. The idea is that you tear down the rocket in an orbital workshop and prioritize the most valuable and easy to reuse parts. If you can pack those parts from several launches into a single capsule, then it could possibly make economic sense. This would be a form of re-usability for the engines, but not the tanks.

I don't know if it's a very good idea, but it could be coherent.

Not the answer you're looking for? Browse other questions tagged spacex falcon-9 reuse first-stage or ask your own question.

9
Why did the US lose almost all commercial launch opportunities?
14
How is SpaceX going to land their Falcon first stage?
8
SpaceX Falcon 9 Reusable first stage propellant for return
66
Why would SpaceX not use parachutes for the final descent of the first stage?
2
Falcon Heavy first stage abilities
22
How does SpaceX plan to achieve reusability of the Falcon 9 *second* stage?
19
On the Falcon Heavy, why are the side boosters using Ti Grid fins, but not the center core?
4
Will SpaceX land the first stage for the TESS mission on land or a barge?
9
Will SpaceX attach its fairings to a booster to recover them?
8
How much of the recovery system does Spacex remove from a Falcon 9 when using it in an expended manner?