I'm a Sci-Fi author, trying to keep the physics real in my books. I am in the process of moving a space station to the Earth-Moon $L_1$. I've read that a vessel can't just sit at that point, but has to orbit it. Can anyone tell me the characteristics of that 'orbit' relative to an Earth-Moon frame of reference? What are its period and velocity? The usual equations don't seem to apply. Coming 'up' from LEO, is there a particular orbit which would be easier to get into, or more favourable for customers, who will be using the station as a waypoint on trips to the Moon?

All first three Lagrange points are unstable, namely the effective potential near these points are saddle points. The L4 and L5 points are stable when the mass ratios are big enough. The unstable directions of those saddle points are inline with the vector connecting the two celestial bodies, however the forces in the plane normal to this direction will be directed towards the respective Lagrange point. So if you move in this plane away from such a point and give yourself a relative velocity perpendicular to the attractive force, you could orbit that point, but you would still have to correct the unstable direction, because any perturbation will build op exponentially over time if you don't.

If you want to know the periods of these orbits as a function of the radius (limiting to circular orbits) you have to look at the forces involved, which should act as the centripetal force. I have to make the assumption that the velocity, with which the L1 point is being orbited, is small compared to the rotational velocity of the rotating reference frame, such that the fictitious centripetal force would only be a function of the position. The variables that I will be using are illustrated in the following figure.

Where $m$ is the Moon, $M$ is the Earth, the $\times$ illustrates the center of mass of the two and $L_1^*$ is a translation of distance $r$ of the $L_1$ point in the perpendicular plane.

The resulting acceleration, towards $L_1$, can be calculated as follows,

where $\mu_i$ is the gravitational parameter of body $i$ and $\omega$ is equal to the angular velocity with which the two bodies rotate around each other. If $r$ is small compared to the other distances, then this equation can be approximated with,

This should be equal to the centripetal acceleration, thus the required velocity, $v$, and corresponding period, $T$, can be expressed as,

So the period would be independent of $r$ (if sufficiently small) and for the Earth-Moon L1 point would be roughly equal to 13.4 days.

I am not an expert in this field and did a few simplifications, so I also looked for a reference and according to this paper for a small $r$ the period would be closer to 11.94 days, so I might have used wrong values for the involved parameters and/or simplified the problem to much, but hopefully this does give some insight into the physics involved, or the low eccentricity of the Moon also has an influence. I also tried to calculate it for the L2 point and for both points in the Sun-Earth system, but kept getting about 1.2 times too high periods compared to my reference.

NASA's planned lunar space station is actually headed to an L2 orbit, namely a halo orbit (more specifically a Near Rectilinear Halo orbit, a subset of the halo family with better stability properties). NASA is choosing this orbit because it offers many benefits: comms coverage to the Earth, access to the lunar surface, good view of the southern pole, etc.

In my constructions, L2 is on the far side of the Moon and L1 is on the side between the Earth and the Moon. Halo orbits exist at both L1 and L2, so you could put your station into an L1 just fine.

Here is an interactive 3D figure of the L2 NRHO where NASA is putting the station: https://chart-studio.plotly.com/~mbolliger/10/#/. If you hover over the orbit, you can see the position, velocity, and time at different points along the trajectory. Note that this is position magnitude relative to the Moon, and velocity expressed in the Earth-Moon rotating frame.

And here is a still. 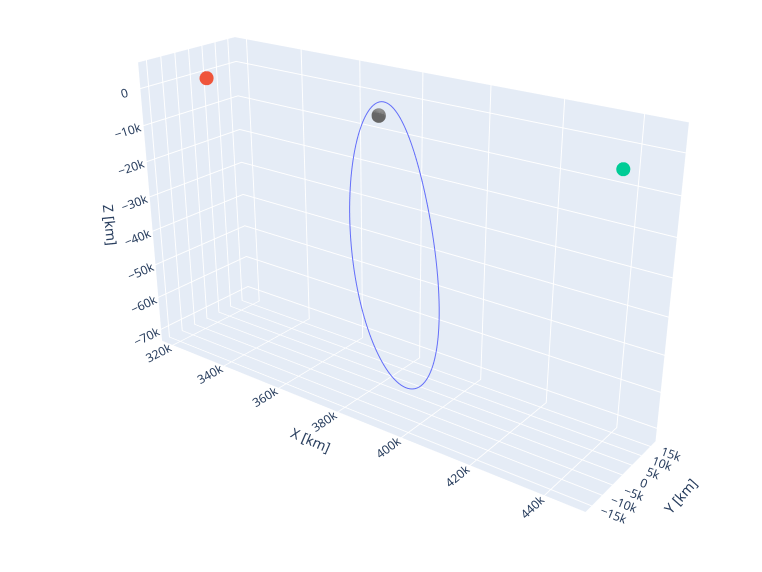 It looks like it's in orbit about the Moon, but it is actually in orbit around L2. There are other three-body orbits that are closer to the lagrange points. Here is a still showing more members of the L2 halo family. 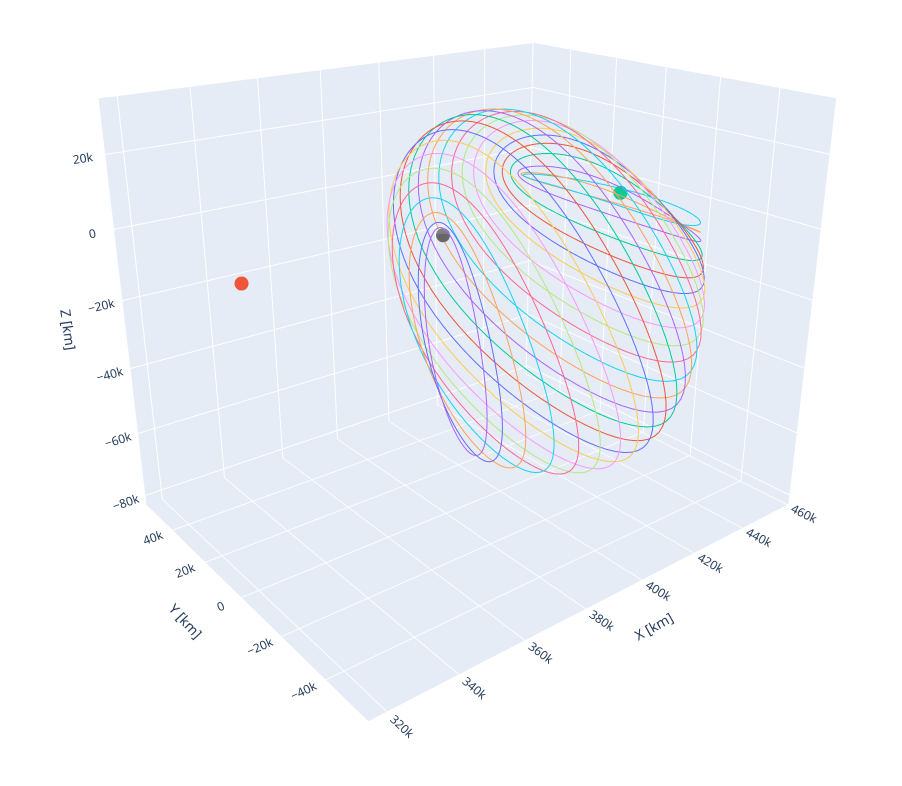 And here is another interactive plot: https://chart-studio.plotly.com/~mbolliger/13/#/.

This is just one of many (infinite) families in the three-body problem. There are certainly many more. I only included L2 orbits because I had those handy and could whip up some figures really quick.

I'm at work so I'm trying to keep this brief, I can update with more information later on. I studied Earth-Moon langrage point orbits for my masters so I can provide some useful info, I hope.

Instead of orbiting EML1, you could sit on it as a gyroscope (for spin gravity), using a gravity winch to Earth and the Moon. Fine-tuning the spin speed precession by winching towards Earth or the Moon are all low-power balancing acts. When the Earth or Moon are eclipsing the Sun, the cosmic ray exposure would be greatly reduced for EVA and maintenance of low-shielded utility areas. Making this a nice low-fuel place to raise a family. In 100 years telepresence robots could do all EVA maintenance, making it a self service fuel station instead. You probably want to add mass to your winches as gravity batteries. You will need those to store your solar power (when you are getting it). Its a good spot for separating steamy asteroids and recombining them as rocket fuel and atmosphere (using solar power).

30
Is there a lot of space trash at the Earth-Moon Lagrange points?
11
How to best think of the State Transition Matrix, and how to use it to find periodic Halo orbits?

8
How to calculate libration amplitude of objects orbiting the $L_4$, $L_5$?
30
Is there a lot of space trash at the Earth-Moon Lagrange points?
15
Do we sufficiently understand mechanics of Lagrange point stationkeeping for EML2 rendezvous and assembly?
7
What, if any, libration points exist in systems of multiple orbiting bodies?
12
Low Energy Transfer within Earth-Moon system
30
Orbiting Earth before heading to Moon
1
Did ISEE-3 spend a few years in a halo orbit around sun-earth $L_1$ without using any fuel?
14
Is this what station keeping maneuvers look like, or just glitches in data? (SOHO via Horizons)
3
How to find the optimal launch trajectory for a rocket launched from a planet with an atmosphere?
4
How Moon and other planets affect Earth-Sun lagrange points locations?