Energy consumption for travelling to the Moon vs. to Mars

I just finished reading Clarke's "Prelude to Space". In chapter XXVII the character Taine gives a talk where he states

It sounds paradoxical, but it's easier to make the forty-million-mile journey from a lunar base to Mars than it is to cross the quarter of a million miles between Earth and Moon. It takes much longer, of course [...] but it doesn't take more fuel.

My question is: Can this statement still be considered true, looking from the perspective of today's science advances? In "Prelude", when Clarke talks about "fuel" he means rockets powered by nuclear fission. Since that technology has not come to pass, the statement should possibly be abstracted to "but it doesn't take more energy". In answering the question, a theoretical lunar base should be taken into account.

The requirements for this can be found at Wikipedia, and here's the general budget. These are measured in terms of Delta-V, which is the only thing that really matters.

Let's take this 1 at a time. The total requirement to land on Mars from the Moon is the sum of the lunar escape velocity and the Mars Insertion Orbit. That is 2.8+0.6 km/s, or 3.4 km/s. The fuel required to hit LEO from the moon is 2.74 km/s Thus, it does take more fuel to get to Mars than it does to get to Earth from the Moon.

However, if you use a continual thrust approach, the numbers are quite a bit different, and in fact, favor the trip to Mars over the trip to Earth from the Moon. That's probably what Clarke was referring to.

There are a few other parameters to consider. Launching out of Earth's gravity well is challenging. A 6.2-million-pound (2800-tonne) Saturn 5 rocket could put 260,000 lbs (120 tonnes) into low Earth orbit (4% of initial mass into orbit). Launching from the moon can put more payload into lunar orbit with the same mass of propellant. The lunar module weighed 10,300 lbs (4700 kg) including 5200 lbs (2400 kg) of fuel and could achieve lunar orbit with that small mass of fuel (~50% of initial mass into orbit, albeit with different fuels/efficiencies).

Once in orbit, because the Moon's mass is lower, its escape velocity is lower than Earth's as well and so is its Mars transfer orbit velocity. In addition, you can factor in the delta-V that you get from the moon's orbit around the Earth, which is 1 km/sec in the direction of a Mars traveler at one time during the month.

So from ground to ground (Earth surface to Moon surface vs. Moon surface to Mars surface) it is no surprise the Moon to Mars would require less propellant, especially considering you could aerobrake to slow the craft down at Mars. It would, however, take much longer. This also presumes you can manufacture a rocket on the moon. If you have to bring the rocket and its fuel from Earth, there's no point, except you might be able to slingshot past the moon after an Earth launch, using its orbital velocity to increase your craft's velocity as it approaches and passes, but because the Moon's mass is low, you don't get much of an effect.

From Clarke's perspective, it was true then and is true now. Propulsion techniques don't change the delta-V, only the time in which the delta-V is applied (assuming no massless propulsion) and the shape of the transfer orbit.

Sometimes one picture, especially the one drawn by Randall, is worth a thousand words :)

This chart shows the "depth" of various solar system gravity wells. Each well is scaled such that rising out of a physical well of that depth - in constant earth surface gravity - would take the same energy as escaping from that planet's gravity in reality 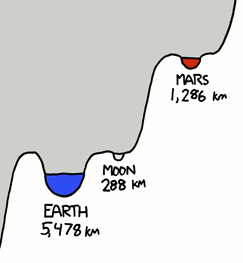 And yes, it does not answer the question, but perhaps helps to visualize one of the concepts needed to understand what's going on. Maybe I should have added it as a comment...?

I assume a big part of this equation has to do with the force and material needed to achieve escape velocity. Earth his a much higher gravity, not to mention air pressure (and an atmosphere) that any space-faring vessel must push through. If I remember correctly, a shuttle has to blast off at something like 5km/sec^2 to reach Lagrange point 5. While the distance is much greater (Moon is about a quarter of a million miles away, while Mars is just shy of .5 AU's) you could theoretically use all the fuel that is needed for leaving Earth for the trip from the Moon to Mars by means of constant acceleration/deacceleration, or even use the Moon for a Slingshot (using a celestial body's gravity well to achieve higher speeds via complicated math, ratios, angles, and one very ballsy pilot). Mathematically, it is probably easier by numbers, but not so much fuel consumption and supplies used; the time for the trip would require a great amount of supplies, not to mention fuel to leave Mars and the return trip home. I know that the really huge red rocket and the boosters are there just to reach spacebound velosity, so it makes you wonder how well they would do in space.

Maybe we should get warp drives a la Farscape.

Not the answer you're looking for? Browse other questions tagged orbital-mechanics mars the-moon delta-v or ask your own question.

2
Minimum size meteoroids for meteorites on Earth, Mars, and the Moon?
12
Low Energy Transfer within Earth-Moon system
3
Space Ship capable of travelling from Earth to Moon and back
45
Which is closer to Mars, Earth or the Moon?
5
How to calculate the delta-v necessary for a suborbital "transfer" of ice from Mars' pole to equator?
2
NASA says Mars' soil has the nutrients for growing plants, how about the Moon?
20
Does it take more energy to get to Venus or to Mars?
1
Where can I find simple-ish math(s) about Moon launches from Earth and fuel consumption etc.?
0
Delta-v difference between Mars and Moon