Why not land booster stages in a cone or net?

Why must you land the boosters on a flat surface? Why not aim for a cone a deep net that can accommodate rough seas, winds, etc?

A picture is below - obviously I am not an artist nor an engineer. 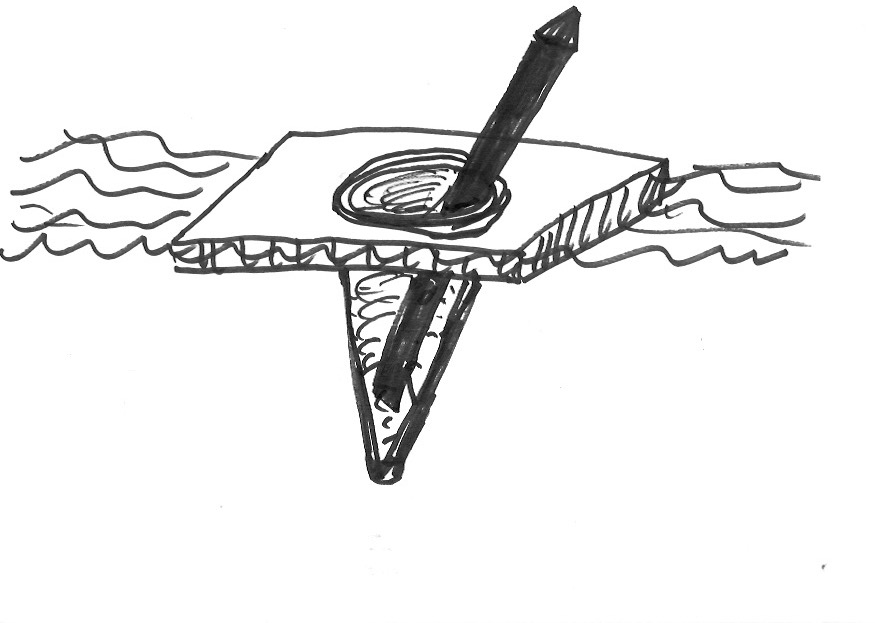 Your proposal wouldn't help. When the rocket hits the edge of the cone, the rocket will still be damaged. The cone also traps the exhaust gases so you'd have to add insulation to the rocket.
Rockets are flimsy: they are built from the lightest materials they can get away with. This means you have to be careful when you transport the rocket. Some rockets need to have their fuel tanks pressurized, otherwise they will collapse under their own weight.
Making the rocket heavier (so it can withstand a rough landing) means it will carry less payload. For now, this is a big issue. If rockets become fully reusable, it's likely they will become heavier and sturdier too, but until then SpaceX has to design a landing strategy that works with the rocket they have.

I'll second the earlier answers by @Hobbes, and @HDE226868. Aiming for a hole in the ground would be a trickier task, to say naught of the potential damage to the fuselage.

The idea of a net could be probably be used on a flat surface though. Here are a couple of thoughts to begin with

Obviously the above two systems are passive devices. An active device could probably be used to flip a net over the fuselage to catch it before it topples; a glorified snare gun say.

p.s. Obviously I may be talking through me hats here. Feel free to down-vote/delete!

Landing a rocket on a flat surface can be tricky. An airplane pilot could tell you all the different factors necessary for landing an aircraft: angle of attack, horizontal speed, vertical speed, braking - and these are just the things that can be controlled. When it comes to landing a plane, there's one thing in your favor: it's tough for the plane to fall over. Yes, it's happened in the past, with disastrous consequences, but in general, a planet is more likely to stay at the angle it's landing at.

Rockets can be different.

Looking from above, their center of gravity is in the middle of a very narrow cylinder. Tilt the rocket too much one way and its trajectory could change. When you're aiming for the ground, a slip like this could mean that the rocket falls over sideways and explodes. That's not the optimal arrangement.

That's also the problem with your setup. You show a conical depression in the barge, with the rocket leaning against it. That kind of landing would be the worst possible, because the rocket is going to come down vertically - as planned - and then fall sideways and hit the wall of the chamber, most likely resulting in severe harm, if not total destruction.

You could make the chamber in the shape of an upside-down conical frustum, but at this point we're back to having it land on what is essentially a flat surface.

Not the answer you're looking for? Browse other questions tagged spacex landing falcon9-r feasibility vtvl or ask your own question.

0
Is there some reason why ORBs don't land in a cylindrical cage?
18
SpaceX first stage landing: Why not use an elevated net above the landing platform to catch the rocket?

2
SpaceX: Recovery/reuse of upper stages - where would they land?
18
SpaceX first stage landing: Why not use an elevated net above the landing platform to catch the rocket?
14
Why does the SpaceX first stage booster boost up and back after separation not just back?
2
Do the SpaceX ASDS orient themselves in a particular direction before a landing? Is there a “landing ellipse”?
49
What technological breakthroughs were required to land booster stages?
54
Why doesn't the Falcon-9 first stage use three legs to land?
19
Why doesn't Starship have four landing legs?
11
What caused STS-129's low energy condition on the HAC?
4
What are these cartridges with holes on the Dragon trunk?
5
Do the ASDS barges have mission specific equipment?