Why have no reusable launch technologies been developed?

So we had the shuttle, and they obviously reused it many times, but it always needed new rockets to get it out of Earth's atmosphere. Why is it so difficult to create a spacecraft that is entirely reusable? Is it simply because the fuel to weight ratio is so large and we need that enormous fuel tank?

What prevents us specifically from creating an all-in-one craft that can take off and land without so many obstacles/costs associated with its use?

How close are we, if at all, to finding a solution to this problem?

Mf, or the ratio of propellent to dry mass is given by:

To climb out of a steep gravity well we need a high thrust propellent. So we use chemical rockets. The $V_{exhaust}$ for the higher ISP chemical propellents is around 4 km/s. Delta V to get to LEO is around 9 km/s.

This sort of delta V combined with Tsiolkovsky's rocket equation means around 90% propellent and 10% dry mass.

Now some of the dry mass budget must go to rocket engines, structure, avionics, power source and payload. So as the delta V budget climbs we're left with fuel tanks about as tenuous as an aluminum coke can. 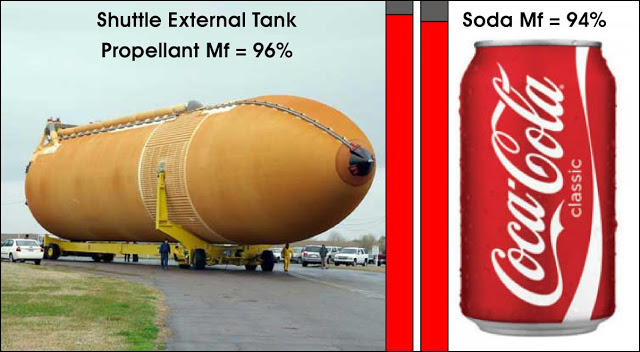 Boost the delta V budget more and you need fueltank walls of cellophane and moon beams.

One of the ways to achieve the mass fractions mandated by the rocket equation is to throw away dry mass enroute: expendable multi-stage rockets.

And then there's re-entry. So now we have a spaceship about as robust as an eggshell re-entering earth's atmosphere at 8 km/s. Re-entry subjects the ship to very extreme conditions: temperatures in 1000s of degrees, dynamic pressure that make a class 5 hurricane look like a gentle breeze.

I give SpaceX better than even odds that they'll reuse a booster stage. If the booster stage has a delta V budet of only 4 or 5 km/s, that allows for a sturdier structure. Also the booster won't be re-entering the atmosphere at orbital velocity.

Re-using a capsule might also be doable. A capsule re-enters the atmosphere at orbital velocity. But it has a low delta V budget. The lower delta V budget allows a mass fraction that permits sturdy structure and Thermal Protection System (TPS).

I give less than even odds the 2nd stage can be re-used. The 2nd stage needs to provide around 8 km/s and needs to re-enter at 8 km/s.

The basic reason is it that it takes a lot of velocity to put an object in orbit. For example the orbital velocity at LEO is around 7.8 km/s. What this necessarily means, is that the final stage of the rocket - the one that actual releases the satellite in it's intended orbit - will be moving at nearly orbital velocity. If you want to recover that stage, you need to slow it back down so it can re-enter atmosphere which can be done most economically through a combination of fuel for a re-entry burn, a heat shield to survive re-entry and a parachute or more fuel for a gentle touchdown. The problem is that all of those add significant weight, so instead of only launching the payload into orbit, you're now launching the payload, fuel, heat shield and a parachute into orbit. This is why it will not soon be practical to recover the upper stages.

It was proposed to re-use the space shuttle tanks by boosting them into orbit. This would have been a lot cheaper than reusing them on the ground, as the extra fuel required to boost them into a safe orbit would have been much less weighty than the fuel, heat shield and parachute for getting them back to the Earth's surface.

Recovery and re-use of lower stages is more practical because they aren't travelling nearly so fast and might even still be in the atmosphere making parachutes very practical. The less delta-v required for recovery, the cheaper and more practical it is. This is why the space shuttle's booster rockets were recovered. Nevertheless recovery of the first stage is not without serious challenges as demonstrated by SpaceX's exercises in first stage recovery:

Following the booster loft of the second stage and payload on its orbital trajectory, SpaceX conducted a successful flight test on the spent first stage. The first stage successfully decelerated from hypersonic velocity in the upper atmosphere, made a successful reentry, landing burn, deployment of its landing legs, and touched down on the ocean surface. The first stage was not recovered for analysis as the hull integrity was breached, either on landing or on the subsequent "tip over and body slam". Results of the post-landing analysis showed that the hull integrity was lost as the 46-metre (150 ft)-tall booster rocket body fell horizontally, as planned, onto the ocean surface following the landing.

It is not easy to engineer a structure to both withstand the vertical forces of gravity/acceleration and very different forces involved in tipping over onto it's side. Even with a parachute you can't just drop a 15 story rocket in the ocean and hope for the best. This is one reason why SpaceX is attempting to land the first stage upright as it would be much cheaper to do this than to add the extra structural reinforcements required to have such a large rocket withstand tipping over into water.

Nevertheless, there is no reason in principle why a fully reusable rocket can't be built, the rocket just has to be significantly bigger (in terms of fuel) and more complex than the equivalent disposable rocket, so far it has not been economically viable to make such larger and more complex rockets.

Not the answer you're looking for? Browse other questions tagged spacecraft spacecraft-development reuse space-industry ssto or ask your own question.

7
Have the micronewton thrusters developed for the LISA mission been flight tested yet?
22
Why does SpaceX have a launch window for a pad abort test?
15
What objects have been sent to space twice?
8
Why isn't someone building a fully reusable solid fuel rocket?
8
How much of the recovery system does Spacex remove from a Falcon 9 when using it in an expended manner?
17
Reusable spacecraft: why still have fairings detach, instead of open/close?
12
Is it possible to get a spacecraft into earth orbit using Linear Eddy Current Braking on an orbital runway?
2
Why was the reusability of the SSMEs so poor, and why was this considered acceptable given their purpose to launch a reusable vehicle?