How do they simulate the SLS engine environment?

I was reading an Aviation Week article about the restart of SSME (RS-25E) production for SLS.

There is a paragraph in it that is interesting to me.

On the SLS, the engine inlets will receive colder liquid oxygen at higher pressures because the LOX tank is taller and the vehicle will have higher acceleration than the shuttle. Plumes from the SLS solid boosters will be much closer to the liquid-fuel engines, so the RS-25 nozzles will need shielding from the heat.

I get how you simulate the higher pressure/colder LOX intake on a test stand. That is just 'mechanics', or as Sheldon would say the doodads that engineers twiddle their time with.

But building a test stand that can simulate a pair of SRB's at 2.8 Mlbs thrust firing nearby? Good grief that is a LOT of energy to try and simulate. Plus 3 other SSME's in close proximity.

The test stand for the SSME's is pretty robust, but it seems like this is an order of magnitude harder.

How will they test this extra shielding need in a meaningful way?

You asked this 8 days before NASA published a description of on how they're testing the heating: http://www.nasa.gov/sls/base-heating-tests.html

Apparently the answer is to build a 2% scale model of the entire rocket including engines and boosters and fire it in short duration bursts of 50-150 milliseconds at a time in a shock tunnel (CUBRC is working with NASA, so probably these tunnels) that's producing flight conditions for various stages of the flight. 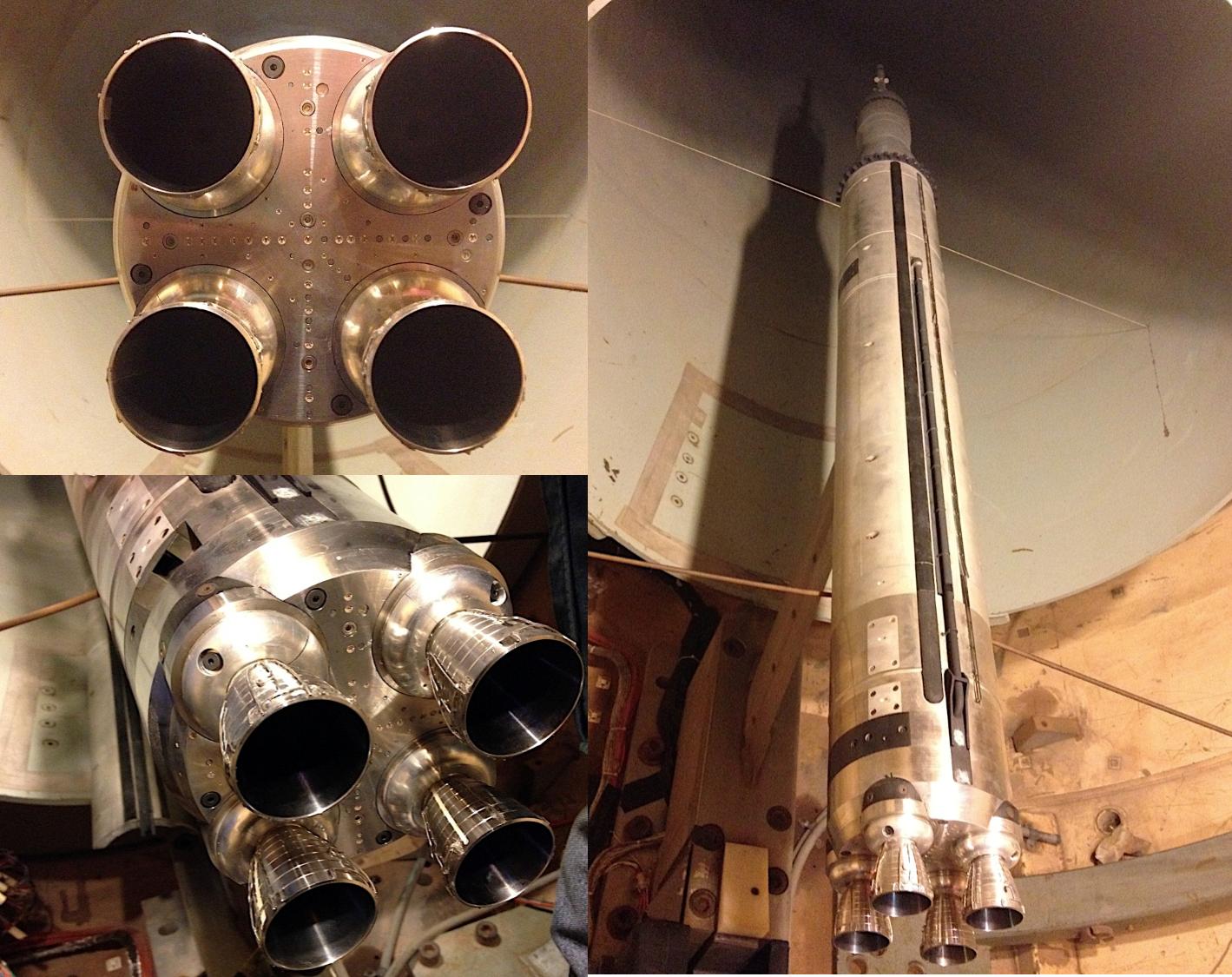 (Image from NASA in the article linked above)

The short duration of testing is is mandated by what the model can handle without melting and very short operation time of a shock tunnel (Wikipedia quotes 20 milliseconds, though that isn't for a CUBRC tunnel).

Testing of the mini models will provide data on the convective heating environments the base of the rocket will experience upon ascent for both planned and unplanned flight conditions. Data from the test series will be used to verify flight hardware design environments and set specifications for the design of the rocket's base thermal protection system. The system keeps major hardware, wiring and crews on future missions safe from the extreme heat the boosters and engines create while burning during ascent.

Note that this isn't testing the actual shielding, it's just providing the data required to determine how much shielding is required. Given knowledge of the heating it has to withstand the shielding can be tested separately to prove it handles the heat load before stacking all the rockets together. I wouldn't be surprised if the first time they test the shielding with an actual SRB on one side and a block of SSMEs on the other is the first time they launch it.

Experimental data is collected by:

The full-stack configuration has 200 heat flux and pressure sensors within the aft section of the rocket to collect data on the base flow environment.

The test program uses new technology that wasn't available during past human spaceflight programs, such as high-speed visible light and infrared cameras, laser diagnostics and new designs of the model propulsion systems that more adequately simulate the SLS full-scale systems.

The first article I linked mentioned that the testing should be done by early summer of 2015. I haven't found any recent references to the testing, but I did find this older NASA post about the scale rockets before they were attached to a model of the rocket for shock tunnel testing. That included a video of a ~65ms long hot-fire test of the core:

No video of firing with the boosters attached but there was this still image (with an old configuration where the core was turned 45 degrees with respect to the boosters): 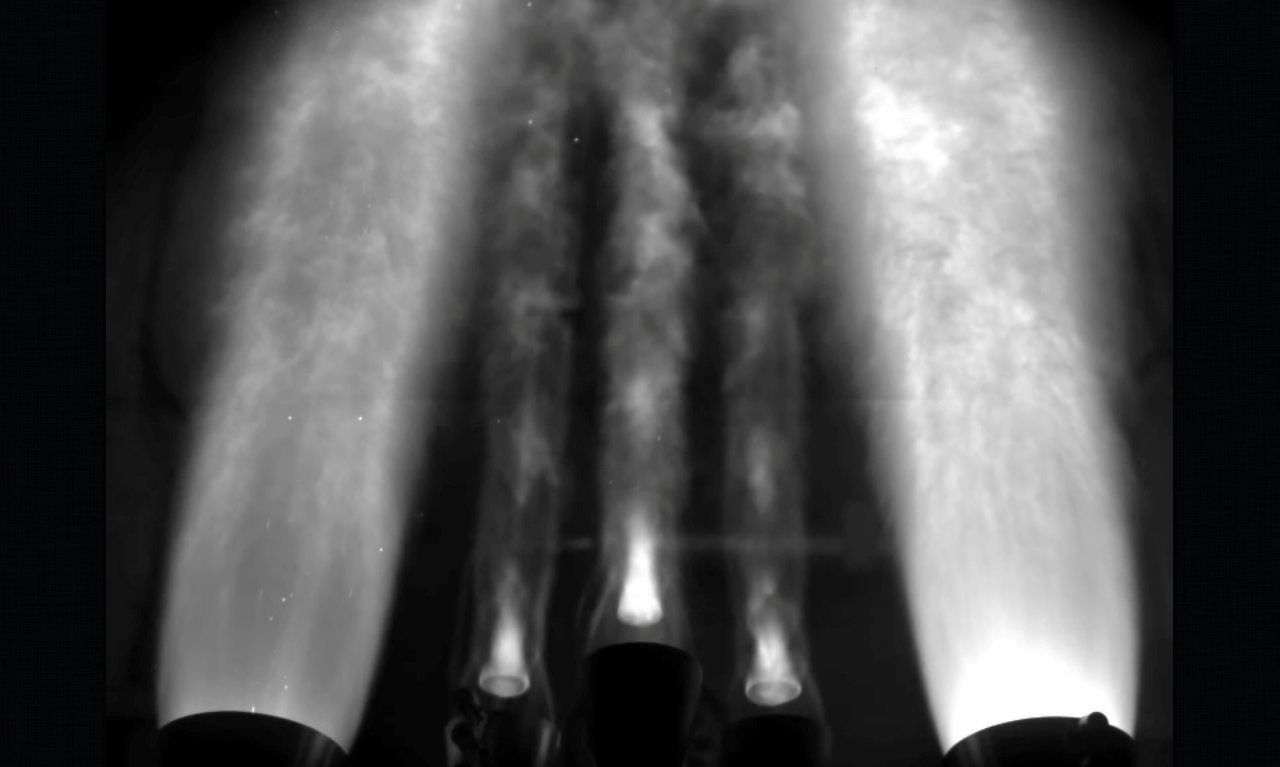 Not the answer you're looking for? Browse other questions tagged testing sls ssme or ask your own question.

7
What sort of analysis was performed before "modern" computing and the invention of finite element analysis and computational fluid dynamics?

11
How will the SLS first stage be supplied with engines? Copy manufacturing the RS-25 or replacing it?
9
Can the SLS reuse its solid rocket boosters?
2
Why is there such a long delay in between test firing and launching the SLS engine No. 2059?
15
Why won't the SLS boosters be recovered?
4
How are SLS SRBs considered man-rated?
6
Could the SLS reach orbit without solid rocket boosters?
4
Could the SSMEs of the SLS do retro burns?
4
What specific device failed, causing engine #4 in the Core Stage Green Run to report a Failure Identification?
5
Will the Artemis I SLS do a static fire on the pad following rollout?