Agencies/organizations who own/operate satellites want to know their future positions after a certain amount of time. We know that models of satellite dynamics are imperfect and also perturbations effects are often hard to predict/quantize.

Given the present (January 2015) technology, state of research, knowledge, data we can acquire..., how accurately can future positions of Earth orbiting satellites be predicted? Or in other words, maximal possible accuracy of prediction we can acquire presently? (accuracy of propagated trajectory) Given the initial state of the satellite, which is for this example considered 100% accurate reference. Also assuming that we get the best data on perturbation effects that is presently possible to acquire. Answer in terms of distance units would be most helpful, otherwise order of magnitude is all right as well.

The time intervals in question could be 1 hour, 12 hours and 24 hours, between present satellite position and the final one we are interested in.

And if the answer depends on orbit type, then I'd like to know for say 3 typical reference orbits, like:

OK, I cannot give you the answer for the ISS, MEO and GEO off the top of my head. However, if you do insist for any specific objects, please post their catalogue numbers (five numbers at the beginning of every TLE line, i.e. columns 03-07) in comments. But here we go.

First of all, I suggest having a look at how we represent multidimensional uncertainty as a covariance matrix. It's a way of representing a multivariate Gaussian distribution. The covariance matrix has standard deviations squared on the diagonal. You can think of uncertainty in this format as an ellipsoid, which looks like this: 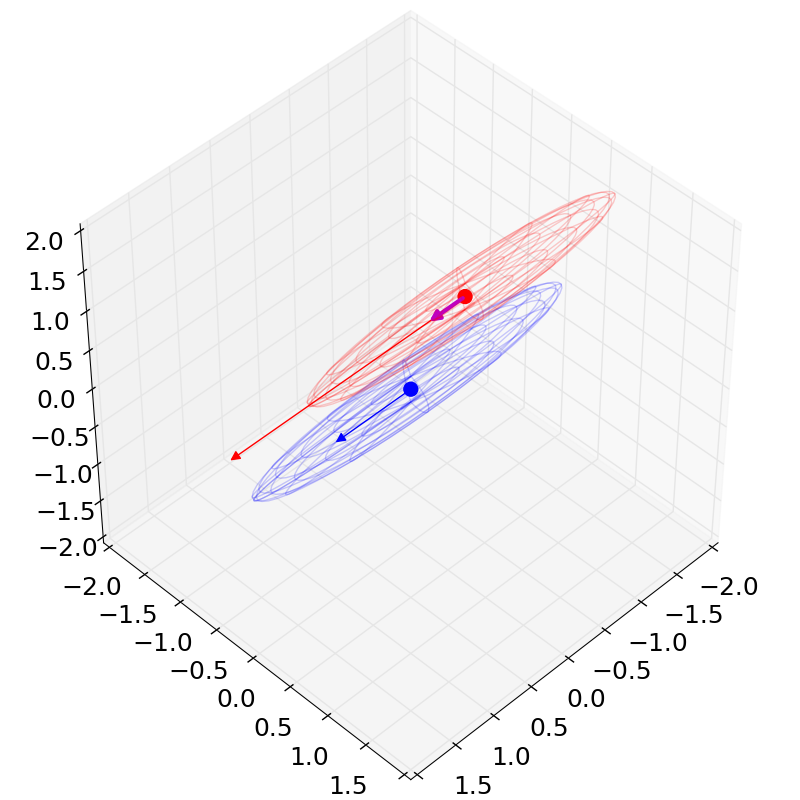 The small dots in the middle are the satellites and the ellipsoids are the regions where they might be. Representing uncertainties as covariance matrices assumes "gaussianity" of the uncertainty, which may not always be true. But it's, so far, a common assumption to make, so let's stick with it for the sake of clarity and simplicity.

You should know that we can never know where a satellite is with absolute certainty. So even when we take some measurements, say with telescopes and radars, and fit an orbit to those it won't be perfect knowledge. Let's call this moment in time, when the orbit is fitted, epoch. So there is some uncertainty at the epoch already. When you propagate, this uncertainty grows over time.

You can estimate the accuracy of a TLE using previous TLEs for the same object (.PDF). This may not seem very reliable but, interestingly, the resulting accuracies seem to be in the same order as ones obtained with much higher-fidelity algorithms (.PDF). Since we're talking about the uncertainty of position as a matrix (the covariance matrix) we can measure this uncertainty by looking at eigenvalues of the matrix, which have units of standard deviations squared. For example, take a Delta 1 R/B (00862): 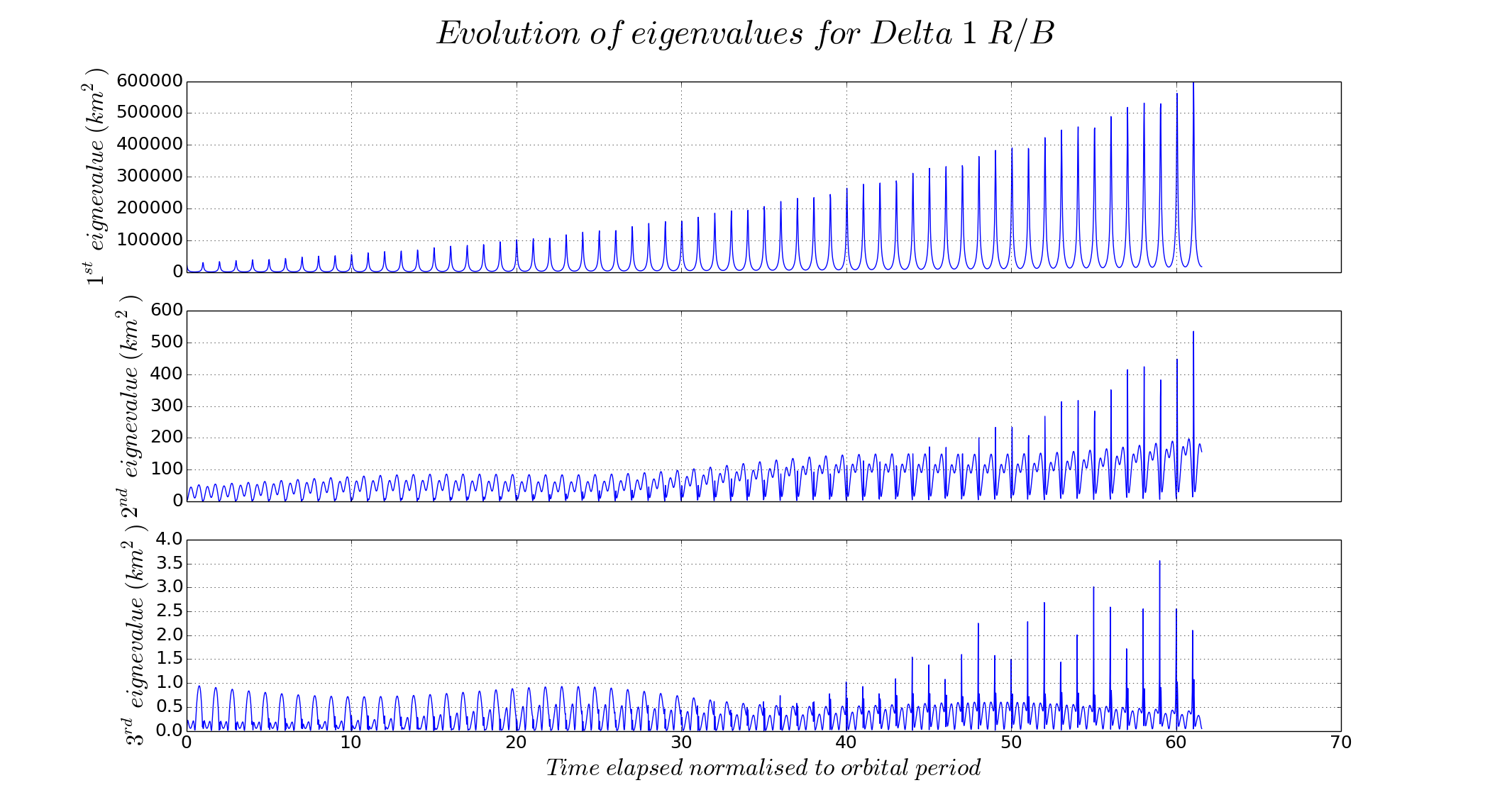 You can see that the uncertainty is the greatest and keeps increasing in one direction, i.e. the in-track direction. That's generally how celestial mechanics work. You can see the magnitude of the uncertainty over the first couple orbits more clearly here (sorry, it's Saturday and I don't fancy reworking the Y-axes labels ;) ). 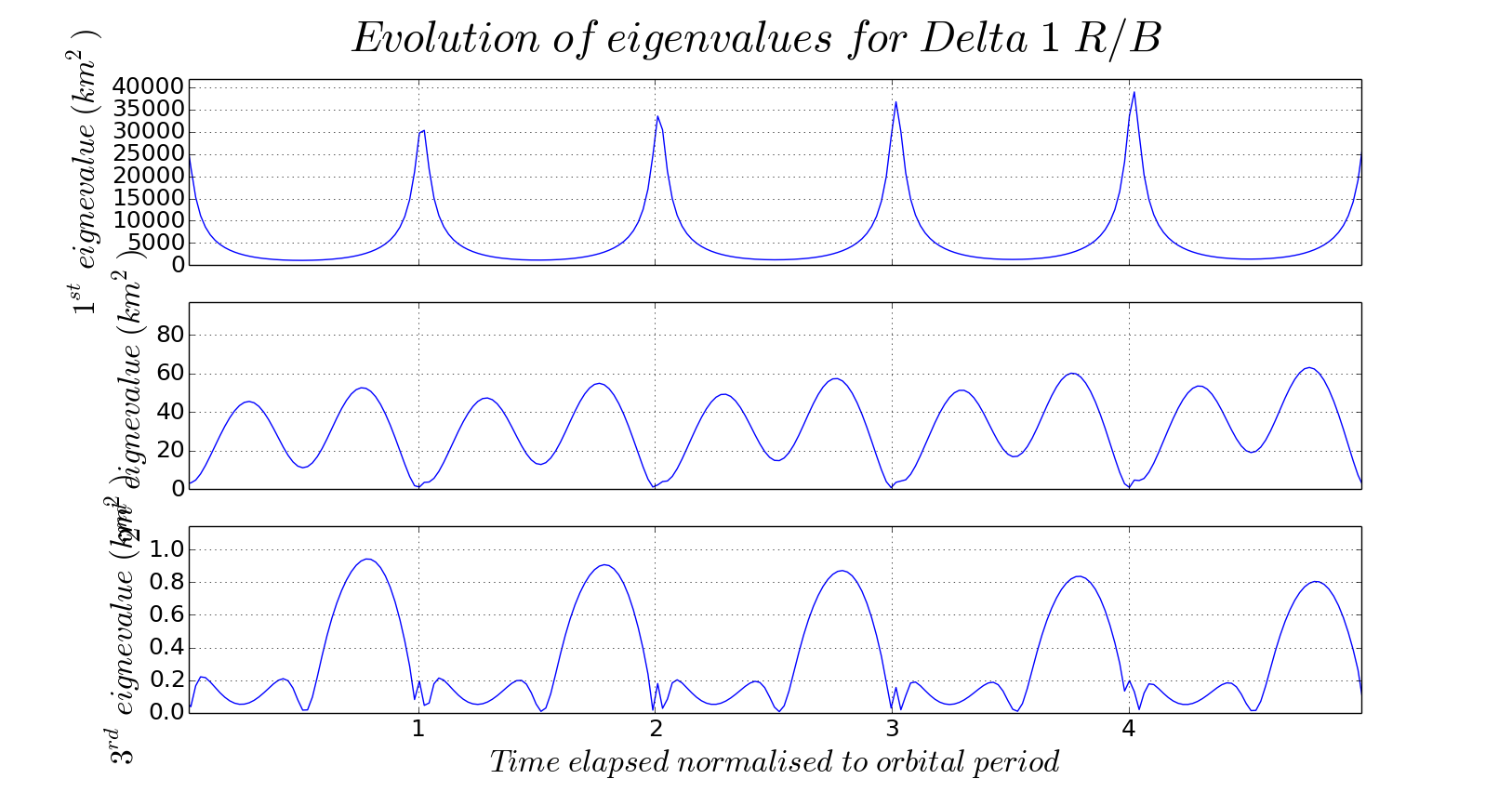 When you look at Envisat (27386, a circular low Earth orbit so much more similar to the ISS) you can see a similar pattern. 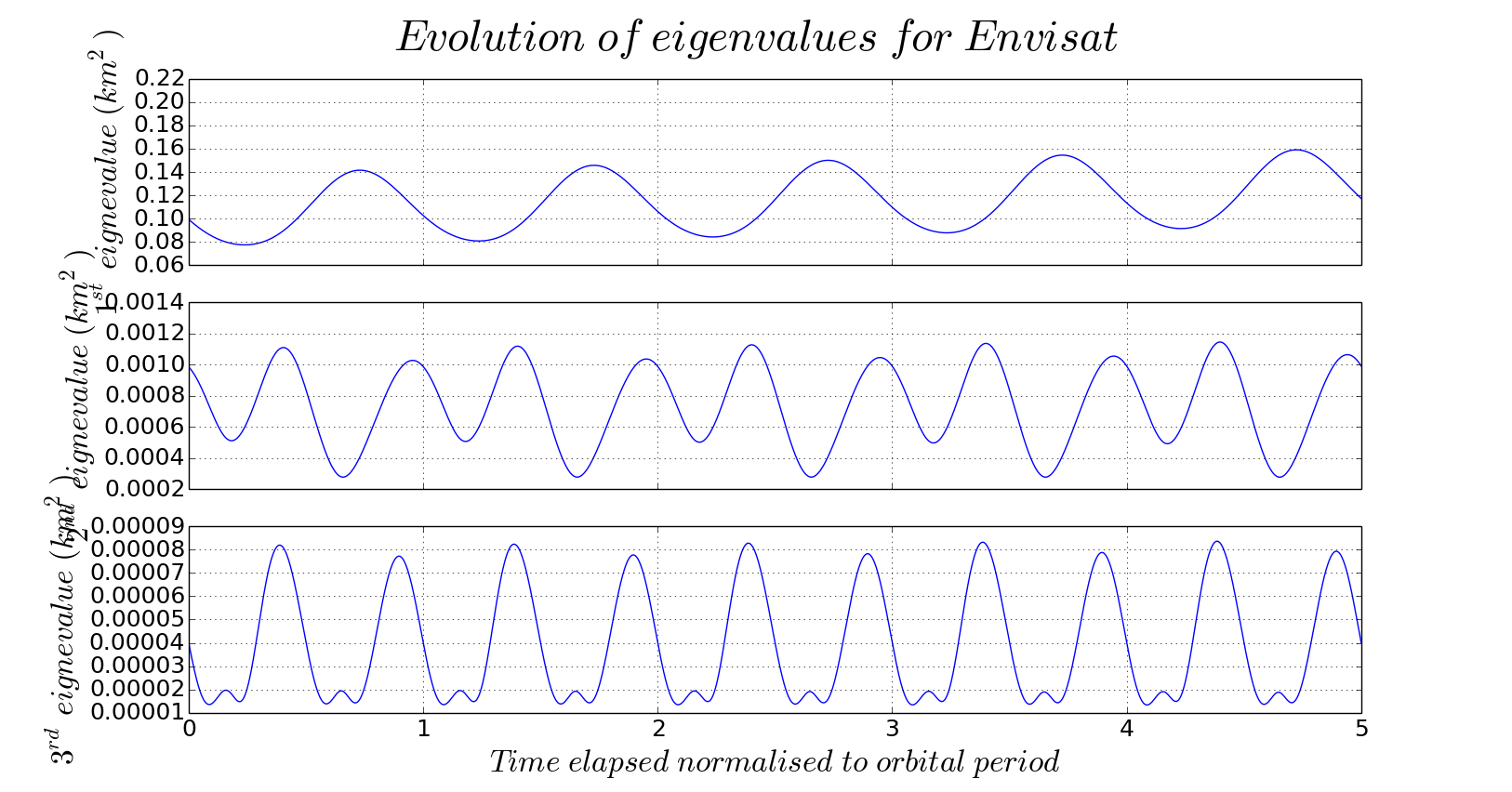 You can see that the uncertainties of positions of both objects vary with frequency of the orbital period (or a multiple of it). So asking "what is the accuracy after one or ten orbits" is a lot more meaningful than 12 or 24 hours.

Altitude is only one of the factors that impact the accuracy of the orbits. Another big one is eccentricity and where on the orbit a given object is located. This is to say that the uncertainty grows and shrinks around the orbit (you can see this on the eigenvalue plots before). We know where the object is around the apogee with much higher certainty than at the perigee. The following figure shows the magnitude of the largest eigenvalue of Delta 1's R/B covariance matrix. 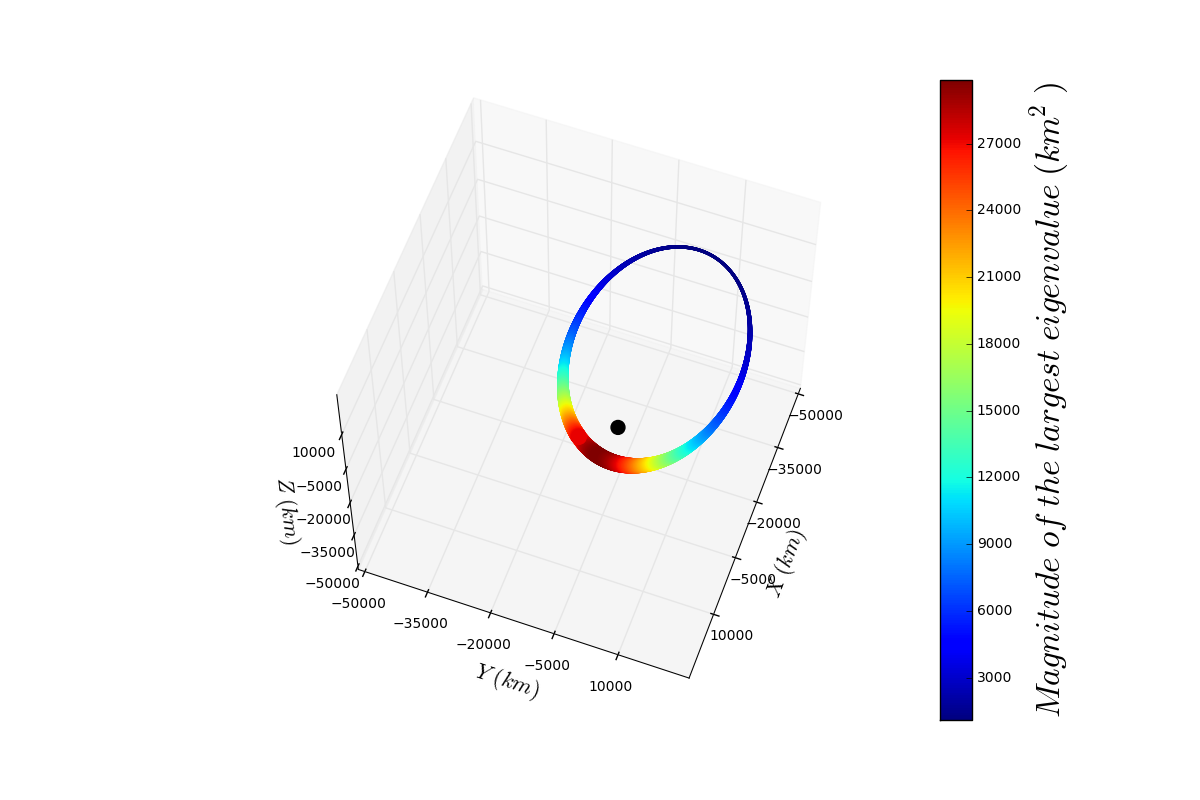 The orbit accuracy "at the epoch", which is the orbit determination accuracy, is never going to be perfect. To see how well TLE accuracy at epoch compares to reality see this reference (.PDF) from the AMOS conference I attached, but it's "a couple kilometres" as a rule of thumb. But the prediction accuracy using SGP4 is somewhat better: the propagated TLEs appear to be accurate to within several kilometres w.r.t. where the objects actually are (source (.PDF)).

On a side note: with laser ranging, coherent Doppler ranging etc. you can improve the orbit determination accuracy to millimetres (important for satellites flying e.g. a radar).

Aleksander LidtkeAleksander Lidtke
77966 silver badges1111 bronze badges
$\endgroup$
Add a comment  |
-2
$\begingroup$
Want to improve this post? Provide detailed answers to this question, including citations and an explanation of why your answer is correct. Answers without enough detail may be edited or deleted.
Share
Improve this answer
answered Aug 24, 2016 at 14:45

Not the answer you're looking for? Browse other questions tagged orbital-mechanics artificial-satellite orbit calculation prediction or ask your own question.

12
Why are uncertainties of orbital state vectors provided as covariance matrixes?

8
How far in the future can SGP4 make accurate predictions?
12
Satellite Ephemeris File Formats
3
How do you compare a simulation with a fitted orbit?
5
How do SDP4's "Deep space" corrections to SGP4 account for the Sun's and Moon's gravity?
6
Calculating longitude, latitude and altitude using RAAN, argument of perigee etc
7
Algorithmic methods or techniques to find conjunctions in large ensembles of state vectors?
2
Predicting Satellite Flyover Calculations by Hand