Why does a spacecraft use a curved orbit to go to its destination, instead of traveling in a straight line? 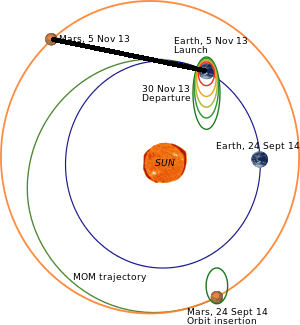 This field of study is called Orbital Mechanics. An object in orbit behaves in ways that are counterintuitive if you don't realize fully what's going on.
The orbit you've drawn is almost impossible to achieve. When a spacecraft travels from Earth to Mars, it orbits the Sun. Anything it does is influenced by the gravitational attraction of the Sun. When you leave Earth and you accelerate, you won't fly in a straight line: your path will be curved because the Sun keeps pulling on you. This is the curve you see in the MOM trajectory.
If you really want a trajectory that is straight, you'll have to expend lots of fuel counteracting the Sun's pull. This takes much more fuel than a curved orbit.

Since you have asked a basic question, I will answer in a non mathematical way. Bear with me, there are few things to explain before we get to the answer you seek.

Every object that has mass is attracted to other objects that have mass. Just as you are attracted by the gravity of the Earth. The amount you are attracted depends directly on your mass. Weight is the name we give to the amount of attraction between an object and the Earth. Weight is actually a force; a 1kg mass "weighs" 9.8 Newtons at the surface of the Earth. A Newton is a unit of force (named after Isaac Newton) - but kitchen and bathroom scales are calibrated in Kg for convenience; it saves people having to work out how much butter they have each time they want to measure it.

Let's get back to our 1kg mass at the surface of the Earth. For convenience, lets say it is at the North Pole (by the end of this, you should be able to say why we made this simplification). Our 1kg mass at the North Pole is actually 6,357 km from the center of the Earth. As we already know, it weighs 9.8 Newtons. But if we lift it to double that distance (12,714km) from the center of the Earth it would exert one quarter of the force - 2.45 Newtons.

The problem with hovering

If we wanted our 1kg mass to stay at that 12,714km distance, we would need to apply a continuous force of 2.45 Newtons to keep pushing it away from the Earth. If we stop pushing, it will fall to Earth. Now, since there is no air at that distance, the only way we know of to create the pushing force is to use a rocket engine. There are different kinds of rockets, but they all use propellant (to do the propelling, or pushing), and sooner or later the propellent will be exhausted. So then our 1kg mass will fall back to Earth. We need a different way.

So, you are sitting a powerful car, stopped at the traffic lights. The driver releases the brake and presses the accelerator pedal. The car zooms away, and you feel pressed back into your seat. What you feel is the force of the seat pushing against your mass, accelerating you. Now, you know what happens if the car turns quickly: you will feel pushed to the side. What you feel is the force of the side pushing against your mass, accelerating you. The difference is that the first time the acceleration was in a straight line, and the second time the acceleration was to the side. This force to the side is what changes your direction; without it you would continue in a straight line. This is due to inertia, a basic feature of matter, described by Newton's first law of motion.

A rock on a string

Now, imagine you have rock tied to the end of a string. You can actually do this experiment. If you quickly whirl the rock around in a circle you can feel the rock pulling at the string, which is pulling at your hand. If you let go of the string the rock will fly away in a straight line. While you keep pulling (applying a force), the rock will fly in a circle. By applying the force to the rock, you are causing it to accelerate in the direction of the force. But the force is always toward the center of the circle, along your string, so the rock flies in a circle.

How hard you have to pull on the string depends on two things: how heavy is the rock, and how fast is it going.

An orbit is like a rock on a string

Let's go back to our 1kg mass above the North pole. If it was stationary, then it would quickly start falling toward the Earth, accelerated by the force of gravity. But if, like our rock on the string, it was zooming to the side, then it could follow a different path. The Earth's gravity will pull the mass towards the Earth, just as the string pulls our rock. So if our 1kg mass was moving at just the right speed and direction, then the Earth's gravity will keep bending its path into a circular orbit. The amazing thing is that it will keep going indefinitely, because there is no air to create friction. This is exactly how the space station or the Moon orbits the Earth, and how the Earth and other planets orbit the Sun.

Johannes Kepler discovered that the paths followed by the planets are ellipses, not circles. A circle is a special kind of ellipse.

How to get from one planet to another

So we have to go the way that takes the least energy. And that is to use our rocket engines to accelerate the vehicle to be on an elliptical orbit, one that passes through our current position and where the planet will be when we get there. This kind of orbit is sometimes called a transfer orbit. After we use our engines to get into the transfer orbit, we can turn them off and just coast along, until we get near the target planet. Then we will use the engines again to get into orbit around the planet, and later to land.

So, to answer your question

The short answer is: a straight line in space is only possible with continuous acceleration (because without acceleration the Sun forces the path to be an elliptical or hyperbolic orbit, depending on total energy).

If you do the math (and mission design engineers do it all day) you will also find that the energy required (read fuel) would increase compared to a flight path (trajectory in space lingo) with coasting along an elliptical path. The most energy efficient trajectory between two circular orbits is the Hohmann Transfer Orbit. This trajectory basically consists of an initial short push (delta v in space lingo) to change the orbit from circular to elliptic, then a looooooong coast to the large circular orbit, then another short push to turn the elliptic orbit into a circular once again.

Not the answer you're looking for? Browse other questions tagged artificial-satellite orbit or ask your own question.

35
Why should space probes have to orbit the Earth before being launched at other planets?
-2
How far is zero-gravity from ground?
1
Why spacecraft 's trajectory is shown undulating curve on 2D image of earth?

2
How does a spacecraft know its orientation in orbit?
3
Why can't deep-space missions escape orbit by skipping off the atmosphere?
4
Why are deorbited satellites allowed a slow orbit decay instead of burning them up rapidly?
3
Why does a spacecraft have angular velocity relative to Earth?
15
Why do satellites appear to move faster when overhead and slower closer to the horizon?
24
Why use a retrograde orbit?
13
A spacecraft is travelling at X units per hour. But relative to what exactly? Does it depend on orbit? How?
18
How does a Spacecraft change its orbit?
1
Does the Earth's orbiting the Sun influence spacecraft in Earth's orbit?