Could a (differently) inclined orbit remain above a Lunar pole half of every revolution?

In order to maintain uninterrupted communication with Earth, at least 3 communication satellites in polar orbits would be required. Could this instead be accomplished by using only 1 satellite in Earth orbit?

Could the communication satellite be put in an orbit which is very similar to that of the Moon, except for having another orbital inclination (say, twice that of the Moon). Same nodes, same semi-major axis, same eccentricity or almost. Couldn't it then remain straight "above" the Lunar north pole during the half of every orbit when the Earth is out of sight from the pole? Could it be achieved with minimal station keeping, maybe using a solar sail?

Could an relayer's orbit remain north of the moon? No. Such an orbit would have a center north of earth. 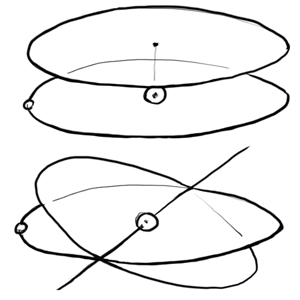 Orbits about the earth have a center within the earth. An inclined relayer orbital plane must intersect earth's plane along a line passing through the center.

When the relayer is north of the orbital plane does it enjoy line of sight with a northern peak? Not necessarily.

Pictured is a northern lunar communications tower. As the satellite moves towards the moon's equatorial plane, it can fall into a moon shadow. 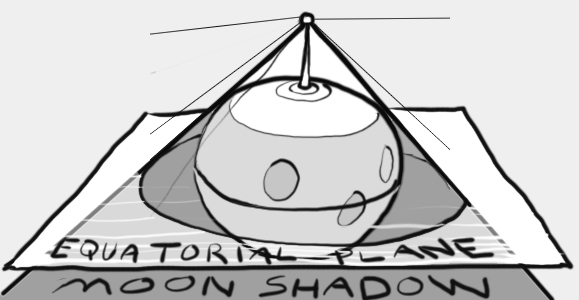 From the tower's point of view, something within the moon shadow would be below the horizon and out of line of sight.

For looking at eclipses, line of sight and similar problems I like to think of Dandelin Spheres. Borrowing from Dandelin Sphere models, the moon shadow falls within a tangent cone to the spherical moon.

Most orbits having the same periods as the moon would be quickly destabilized by the moon's influence. Exceptions are the Lagrange regions. EML4 and 5 are fairly stable.

If a EML4 or 5 probe where crossing through the moon's equatorial plane, how tall would a polar tower need to be enjoying line of sight? 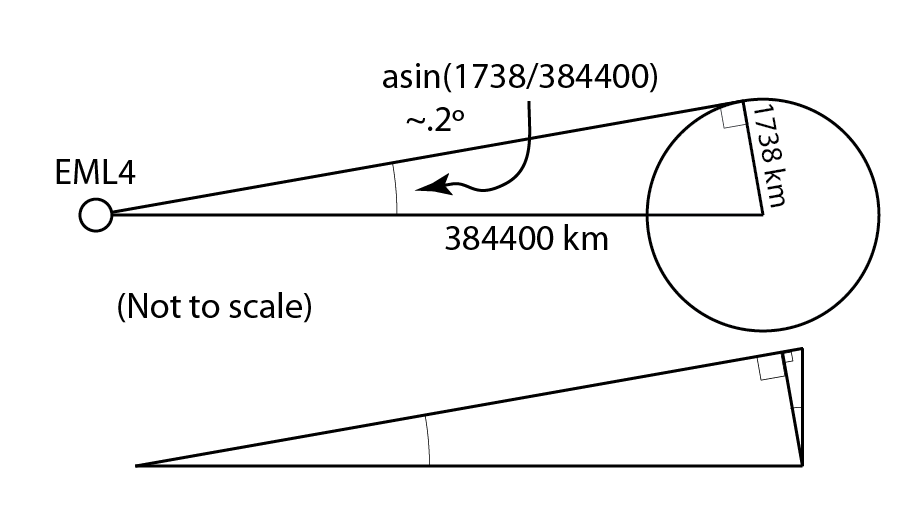 An EML4 relayer sitting on the moon's equatorial plane will be able to see surface points to within about .2º of the moon's north pole. 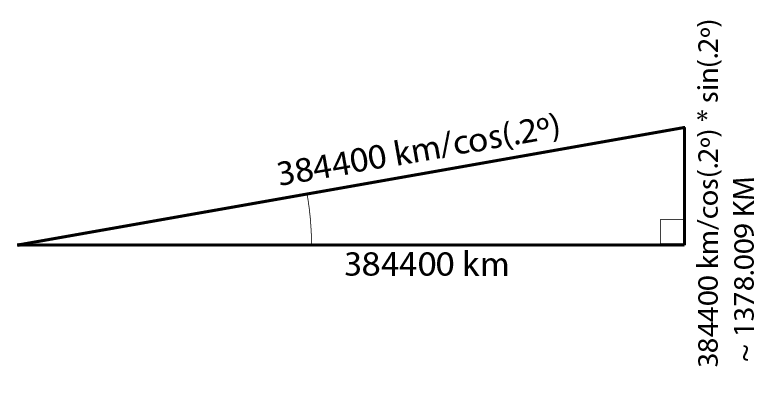 Earth's trojan 2010 TK7 is inclined about 21 degrees to earth's orbital plane. So I would think it's possible for a lunar trojan inclined to the lunar orbit. 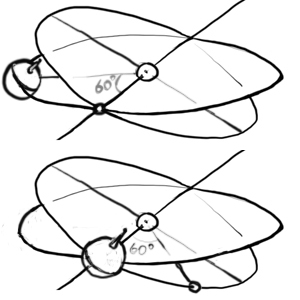 All other times the relayer would be either north or south of the moon's equatorial plane. So polar towers would be visible a little more than half the time.

It seems to me there's two possible trojan orbits that see the towers more than half the time: An EML4 orbit parallel to the moon's equatorial plane and an EML5 orbit also parallel to the moon's equatorial plane. But these two relayers would only be 120º apart. At first glance it seems to me they'd need to be 180º apart to provide a given pole with constant line of sight.

So at this time I can't imagine a pair trojan relayers that could provide constant line of sight to the poles.

Halo orbits about L1 and L2 are also possibilities. But these orbits are a lot closer than L4 and L5 and thus more vulnerable to falling into the moon's shadow as they approach the moon's equatorial plane. Thus less than half of their orbits would enjoy line of sight.

It seems to me 3 is the minimum number in any case.

It is not possible to do this with just one communication satellite orbiting around the Moon, due to the reasons described by @HopDavid. However, it can be done with just one comsat in Earth orbit.

Imagine a satellite in polar orbit of Earth, with a high apogee and a low perigee. If the apogee is over the north pole, the comsat will be over the equatorial plane in more than half of the time, with free line of sight to the Moon's pole. The short periods when the satellite is under the equatorial plane is covered by direct line of sight between the Moon and Earth. Such a high eccentricity orbit is somewhat analogue to a Molnya orbit, an orbit that is often used for Russian communication satellites to cover the high latitude regions of Russia most of the time of their orbit.

The orbit has to be high tough, with one revolution a month, but the stability for this kind of orbit is good. See for instance the planned orbit for TESS:

Yes, if you'll accept a sufficiently loose definition of "orbit".

Put the satellite above Earth's north pole, deploy a solar sail to keep it there. Beware that it is going to be more than a million miles out, your lag time will be 10x what it is for a direct path transmission.

Robert L. Forward's patent on this (although he was intending it for reaching the polar regions of Earth, I would think his patent applies for reaching the moon) has run out, you're free to do it.

Not the answer you're looking for? Browse other questions tagged orbital-mechanics the-moon communication-satellite pole or ask your own question.

16
Can communication satellites be used in lunar orbit?
3
Where should a lunar polar ISRU mission land?
15
Why didn't Apollo land on the Lunar poles?
26
Can a satellite orbit Earth so that it always has the Moon in line of sight?
3
How are "terminator-riding" sun-synchronous satellites never passing over the pole?
1
Traveling in a circle while in orbit
6
Inclination maneuvers for GEO satellites
6
Why is the Duration of Time spent in the Dayside greater than that of the Night side of the Moon for Chandrayaan-2 Orbiter?
4
Why are the poles of the Moon in Google Earth so different from other regions?
8
Is there a certain plan on how Houston will talk with the Artemis 3 crew?