Are Oort clouds of stars rather discrete or connected?

In the article Nomads of the Galaxy (or this video), it is said that there are possibly 100000x more "free planets" (not orbiting a particular star) than stars. If the size distribution of "free objects" is similar to size distribution of asteroids (some power law - much more small object than large objects), then it could be expected that there are a considerable amount of smaller objects which migrate between the sphere of influence of one star to another.

In such a case it would be better to describe the situation as star system is immersed in some continuum (like gas) of free objects with some non-negligible background density, rather than to speak about discrete Oort clouds. Is there any model or other work which addresses this?

(I'm interested in the connection to the possibility of interstellar travel)

Below is a graphical illustration of my question. Which is more realistic, the upper or the lower chart? 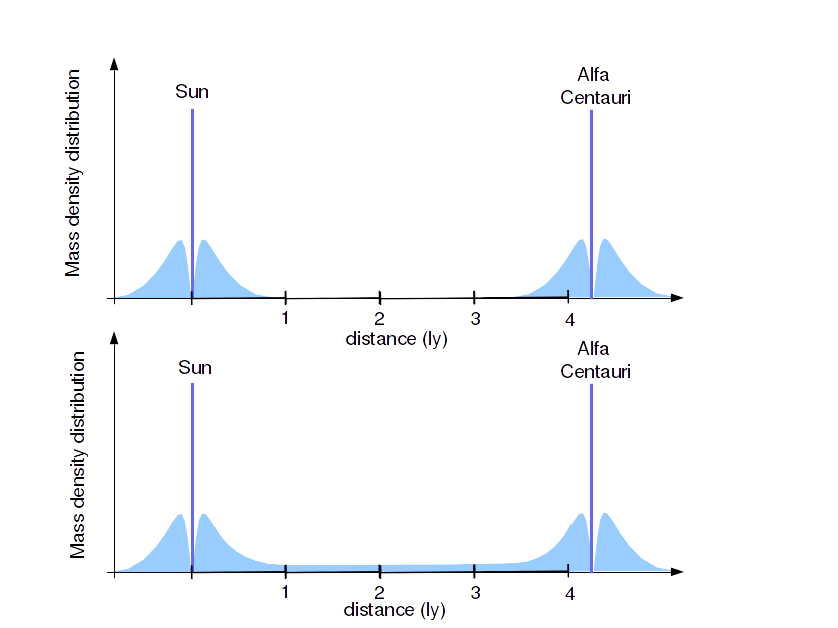 Interstellar comets are icy bodies traveling in the areas between stars. They're just like the comets in the Oort Cloud, with the exception that they've been ejected from whatever stellar system they formed in. Wikipedia cites a good paper that analyzes the distribution of these comets, The Demographics of Long-Period Comets by Paul J. Francis. Francis gives an estimate of a number density of $4.5 \times 10^{-4} \text{ comets/AU}^3$. Francis used data from the Lincoln Near-Earth Asteroid Research survey (LINEAR).

The Oort Cloud, on the other hand, has trillions of objects within a sphere of about 50,000 AU in radius, which, at a lower bound of one trillion objects, gives a number density or about $1.91 \times 10^{-3} \text{ comets/AU}$ - and that's a conservative estimate.

So even though the density of interstellar comets is much lower than the density of comets in the Oort Cloud, the environment is more "continuous" rather than "discrete."

Not the answer you're looking for? Browse other questions tagged interstellar-medium oort-cloud or ask your own question.

21
How could we observe the Oort cloud, if it exists?
10
Are there enough oxygen molecules in space that they could be compressed into breathable oxygen?
10
Finding non-lit objects at light minute ranges
1
How would an interstellar probe navigate the pull of gravity from stars and other large objects on the way?
10
Is Voyager 2 capable of proving the existence of Oort cloud?