How far away will I get if I'm --just under-- escape velocity?

You are talking about an elliptical orbit about the earth. Two points on this ellipse are of interest.

If you're launching from earth's surface, the perigee would be 6378 km from earth's center. (6378 is earth's radius). For this problem I will pretend there's no earth atmosphere.

The apogee is what you're interested in, the farthest point from the earth.

The vis viva equation is a nice tool for finding velocity:

Here is a pic of the stuff I've described so far: 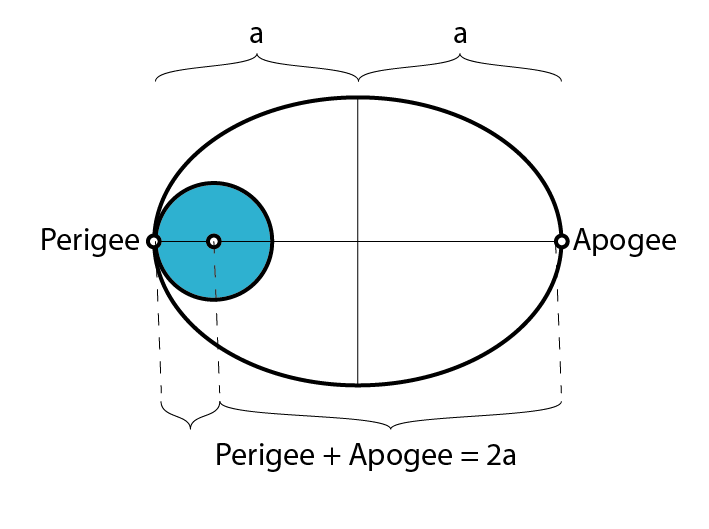 We're interested in the speed when the object leaves earth so r would be 6378 km.

Let's take a look at the vis viva question again:

Noticed I bolded the term that uses the semi-major axis quantity. What happens when a gets real big? 1/a gets closer and closer to zero.

So for high apogees you have something very close to

Which is escape velocity.

"Just a hair under escape" describes a multitude of ellipses!

But when you get apogees that high, 2 body mechanics is no longer a good model. The gravitational influences of the moon and sun are enough to bend the object out of an elliptical path. Launch something as high as SEL2 and it is likely the sun will wrest the object from earth's sphere of influence.

For an escape from a body, if you depart radius $r$ with $1-\epsilon$ times the escape velocity, and you are going directly away from the center of the body with that velocity, then for small $\epsilon$ you will get to $r\over 2\epsilon$ before falling back.

Derivation, starting with the velocity $v$ at radius $r$, just shy of the escape velocity:

Relating the velocity to periapsis and apoapsis using the conservation of energy:

For a trajectory directly away from the center of the body, use a periapsis of zero:

So in the case where you make the mistake of using the Earth escape velocity without taking into account the Moon, then $\epsilon$ is about $0.006$. So you would get about $500,\!000\,\mathrm{km}$ from Earth before falling back. A little farther than the Moon. That assumes however that the Moon is not close to your path. If it is, then it might either a) give you enough energy to completely escape, or b) send you back to the Earth with less energy.

In the spirit of your example, e.g. if you assume that $11.2\,\mathrm{km/s}$ is exactly the escape velocity, then your $\epsilon$ is about $10^{-7}$. So you would get about 36 billion kilometers away (240 AU!). However other bodies such as the Sun, Venus, Jupiter, and re-encountering the Earth-Moon system would alter your course well before that.

The easiest way how to compute this is to use specific orbital energy. The following quantity is preserved over time:

since the mass of a spaceship is negligible compared to the mass of the Earth, we can omit $m$.

The furthest point where we can get is when we consume all kinetic energy, so $v=0$. Knowing the velocity $v$ at the Earth surface $R$, we get

where $R$ is the radius of the Earth.

Substituting this into the equation for $r_{\mbox{max}}$, we obtain

(Of course we completely disregarded the effect of all the other celestial bodies.)

Not the answer you're looking for? Browse other questions tagged launch orbital-mechanics escape-velocity or ask your own question.

9
How to calculate apoapsis of sub-orbital trajectory?

1
How to calculate the sphere of influence radius of the sun and other stars?
11
How can you rendezvous with the ISS via the "Soyuz scheme" without a computer and out of ground contact?
9
Navigating in space with only cameras
31
How could an object barely exceeding escape velocity from the Moon eventually reach the Earth?
9
How far will the debris cloud from Hayabusa-2's touch-and-go sample recovery travel around Ryugu? Will any have escaped to heliocentric orbit?
1
Confusion with direction (vector) of minimum velocity required to reach an orbit and escape velocity
16
Non-orbital takeoff and landing?
2
Which orbital elements are normally targeted at launch?