How was this image of the sun taken and what does it show?

In the last few years amazing images of the sun have been around. They are from the Solar Dynamics Observatory's AIA instrument. The one below shows super-hot iron atoms. So, am I looking at field lines of the sun's magnetosphere? 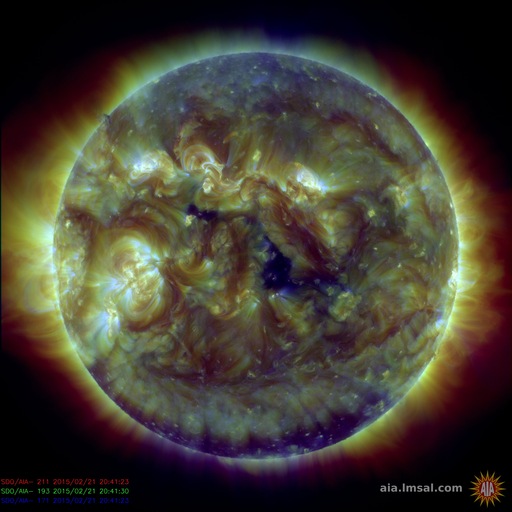 The light is in the extreme ultra-violet range and was collected through filters. What are those filters made of? What is the exposure time for these photos? Does the unit use the kind of light recording surface a digital camera does, or is it a surface capable of recording in the EUV range?

The whole thing stirs a bunch of other questions, I thought I'd just test the waters...

The composite image cannot be made from our standard jpegs as they are log-scaled to improve the contrast. You put the linearly-scaled data into the color channels of an sRBG image and then log scale the result.

The AIA instrument filters are multi-layer metallic filters deposited on glass mirrors that were ground to the right shape. All is explained in Lemen's article that is freely available at http://adsabs.harvard.edu/abs/2012SoPh..275...17L . Other articles describe the calibration and operations. A front filter keeps out the visible light in most channels. The CCD is not greatly heated by the radiation that gets through the filter but is cooled by a radiator pointing towards space.

OK I'll bite, despite that Dean Pesnell of the SDO team must really love me by now. :)

Most of the info you're after is available on SDO Data pages, if you click on the info icon. Also note that the Fe (Iron) channel composite in your question is equipped with color-keyed channel info bottom left of it, tho it is rather difficult to see at the resolution you used. Here's the description for the composite image:

This image combines three images with different, but very similar, temperatures. The colors are assigned differently than in the single images. Here AIA 211 is red, AIA 193 is green, and AIA 171 is blue. Each highlights a different part of the corona.

So the composite is generated by taking the three different wavelength (given in their names in angstroms) images and combining them per color channel into a single color image. The three inputs are described as (using latest SDO data thumbnails as examples): 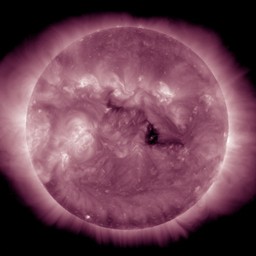 This channel (as well as AIA 335) highlights the active region of the outer atmosphere of the Sun - the corona. Active regions, solar flares, and coronal mass ejections will appear bright here. The dark areas - called coronal holes - are places where very little radiation is emitted, yet are the main source of solar wind particles. 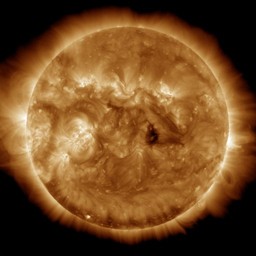 This channel highlights the outer atmosphere of the Sun - called the corona - as well as hot flare plasma. Hot active regions, solar flares, and coronal mass ejections will appear bright here. The dark areas - called coronal holes - are places where very little radiation is emitted, yet are the main source of solar wind particles. 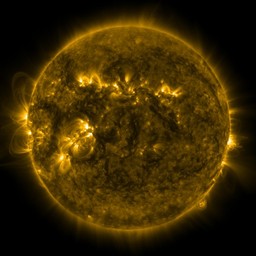 This channel is especially good at showing coronal loops - the arcs extending off of the Sun where plasma moves along magnetic field lines. The brightest spots seen here are locations where the magnetic field near the surface is exceptionally strong. 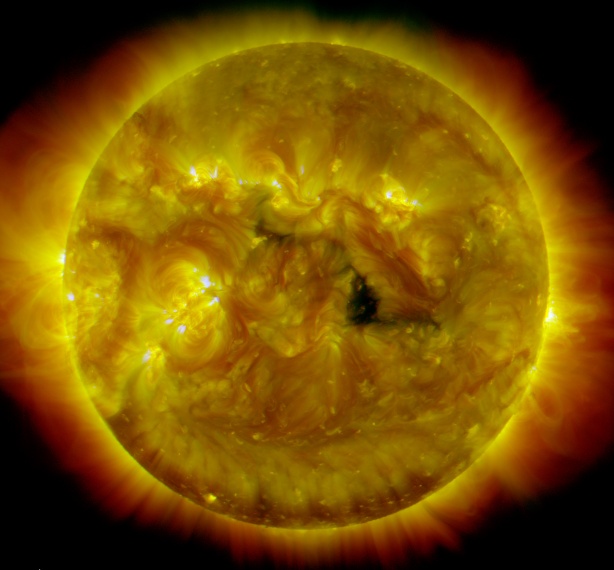 Image above is a RGB channel combine from direct grey scale conversion. It looks pretty nice, but too much red. OK, next try: 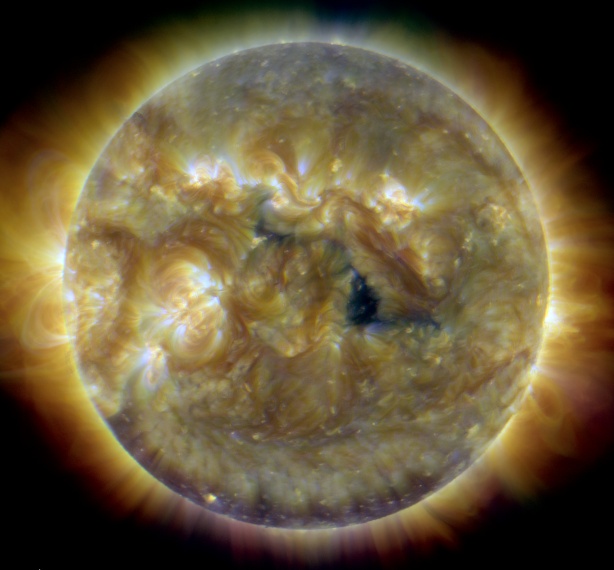 That's better, but still not as good as from the SDO team of course. What I did here is to convert input channels into B&W by using the portrait profile in Photoshop, then recombined as RGB components just like before, and also adjusted output color balance a bit. I opted for 6500 K color temperature. And there was a bit of contrast adjustment too. It's still not exactly like the composites from SDO tho: 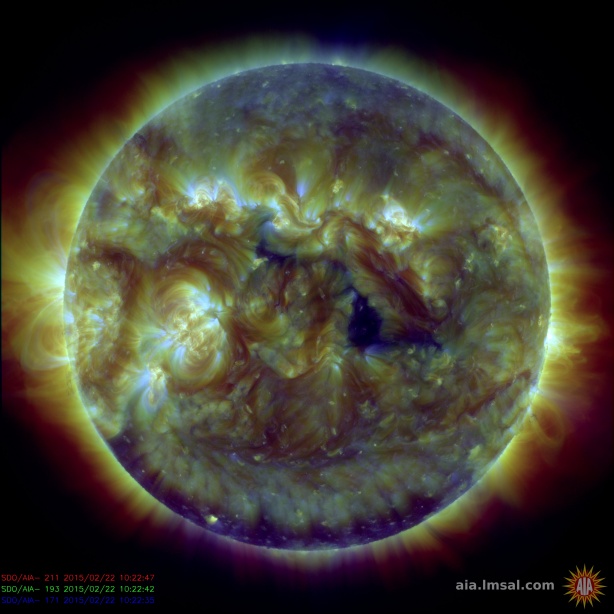 What are those filters made of?

I have no idea. They're multilayer-coated optical filters that let through incident light in wavelengths as described above. I presume they're high quality and were really expensive though. :) My best guess would be they were made by multiple vacuum deposition layers of partially reflecting dielectric compounds on a glass substrate. This would be the so-called "traditional coating", but there are other processes that could have been uses for AIA.

What is the exposure time for these photos?

If you look at individual channel timestamps in the image, they're at most a few seconds apart. AIA is capable of taking at least one image each second. But changing optical path (AIA uses four telescopes) and filters will take a few seconds, which will reflect in timestamps. And each filter will likely require slightly different exposure times. The browse data you're looking at (Level 2) are processed from raw (Level 0) data stream and corrected to a standardized exposure time. Refer to the Guide to SDO Data Analysis documentation for more info.

Does the unit use the kind of light recording surface a digital camera does, or is it a surface capable of recording in the EUV range?

AIA uses 4Kx4K resolution CCD (Charge-Doupled Device) sensors that operate at about -70° C (source). Keeping sensors at low enough temperatures enables them to record in visible and UV range with low thermal noise. CCDs are a bit expensive to make, and you'd usually find cheaper CMOS sensors in your consumer grade appliances. But they are widely used in various professional markets, including astronomy.

Not the answer you're looking for? Browse other questions tagged the-sun imaging space-weather solar-dynamic-observatory or ask your own question.

5
What are these echo-like artifacts in some SDO images?

4
Why does TRIAD need sun vectors and magnetic field vector?
8
How are solar panels protected from the Sun?
28
Is this really an image of the sun, or an “artist's conception”?
6
What is this white dot and strange line in SOHO image?
2
how and why is image processing used on spacecrafts?
1
How could the recently explained “glints” seen by DSCOVR appear so compact considering the finite size of the sun?
3
What is happening in this photo of a glowing plume behind STS-70 and how was it taken?
6
Where exactly on Mars was Curiosity when this image was taken?