Is the SLS irrelevant if the Falcon Heavy launch is successful this year?

My take is that, like so many bad, and good, NASA ideas, the SLS will get the axe after spending billions on the NASA subcontractor(s). Regardless if the SLS comes to full life cycle, NASA will not fly/build many rockets - once SpaceX proves the Falcon 9 is reusable, and the Falcon Heavy launches successfully. Which will be this year.

The axe chopping probably will be with the next president. Obama already tried to kill SLS, and pushed for increases in Commercial Crew, which the senate lowered. The fight on that is over for this term, I believe.

With a fully reusable Falcon Heavy, can Boeing's SLS product ever compete?

I am not a fan of the SLS. So take my comments with that as a grain of salt.

SLS is fundamentally a jobs program. It has no mandate to be affordable. It also has no real mission at the moment. Thus there is nothing really pushing its development other than jobs in states of politicians.

Thus logic and rationality do not apply to SLS. It will be cancelled when the politicians stop fighting for it.

Crossfeed, which was initially discussed has been discarded as the performance of the base Falcon 9 core improved. The first Falcon Heavy will launch with Block 3 side boosters. Unclear if they built a Block 5 center core, but it is a slightly different booster as the center core. Once they transition to all being Block 5 cores, performance is expected to hit their old numbers without needing crossfeed. It also turned out to be way harder than they expected, and then became unnecessary and they pivoted. (edit: 2021 - 3 launches so far, 2 coming in 2021 of F-H, 0 SLS so far, with one planned in 2021).

But if you can launch a Falcon Heavy, fully reusable for the prices SpaceX is quoting (\$90-\$125 million), several times a year, vs SLS once every 2-4 years for billions of dollars a launch, the choice seems obvious. Build smaller payloads in pieces and actually get your payload launched. Cadence matters almost as much as payload.

As currently designed, although the Falcon Heavy has a 54 mT payload, the actual payload adapter that SpaceX produces is limited to much less mass. It is unlikely in the near future we will see any LEO boosts with the full payload mass, but if a customer wants to I am sure SpaceX will modify the payload adapter.

On the other hand, the fairing on Falcon Heavy is the same as the Falcon 9 fairing and is in fact, possibly one of the most limiting factors. It is a 3m core, with a hammerhead fairing, extending about a meter on either side, for a 5m wide fairing. Alas, there is 'stuff' on the inside that reduces the size enough to differentiate from the Atlas booster's 5m fairing which has more internal space. SpaceX faces this issue with launching their 4400 satellite Starlink constellation, where they find the booster can launch the needed mass, but the fairing cannot hold enough satellites.

SLS will have MUCH larger fairings around 8.5 to 10 meters wide, for which there may certainly be good use cases. However you have to trade off the cost, low flight rate, against building the payload in smaller pieces.

One of SLS's big problems is lack of a mission. Thus they need to find something really important to do with SLS. A realist who wants their mission launched would be wiser to consider Falcon Heavy with multiple launches and in space assembly to actually get launched.

The bigger telltale will be when you see a push to launch Orion on Falcon Heavy. That will be the death knell for SLS.

My personal prediction is SLS will actually launch (late), at least twice, which takes us out to at least 2020, but not too many times more. Thus to the specific question asked, the answer would be no. (Edit in 2021: Still no SLS launches, 2021 is scheduled to have one test flight in Sept. But any delays, of which there shall of course be, will likely push it to 2022 realistically. AND the test fire of SLS only managed 1 minute out of an 8 minute test, so expect delays.).

BFR/BFS from SpaceX will be the SLS killer, if they succeed at developing it. That looks to be available in the same time frame, and is more likely the SLS killer.

To give some context around Starship/Super Heavy (renamed since I wrote this originally), they are SN9 (Serial Number 9) of test vehicles. They have flown 4 vehicles (not very far, 3 at 150m, one to 12.5K (though it failed to land). They are rapidly building more prototypes and are at least engine #46 from spy photos.

The current state of the Starship build as of Jan 2021 is nicely summarized in this infographic. (Yes it is gratuitous, but I really like this image so I am going to share it). 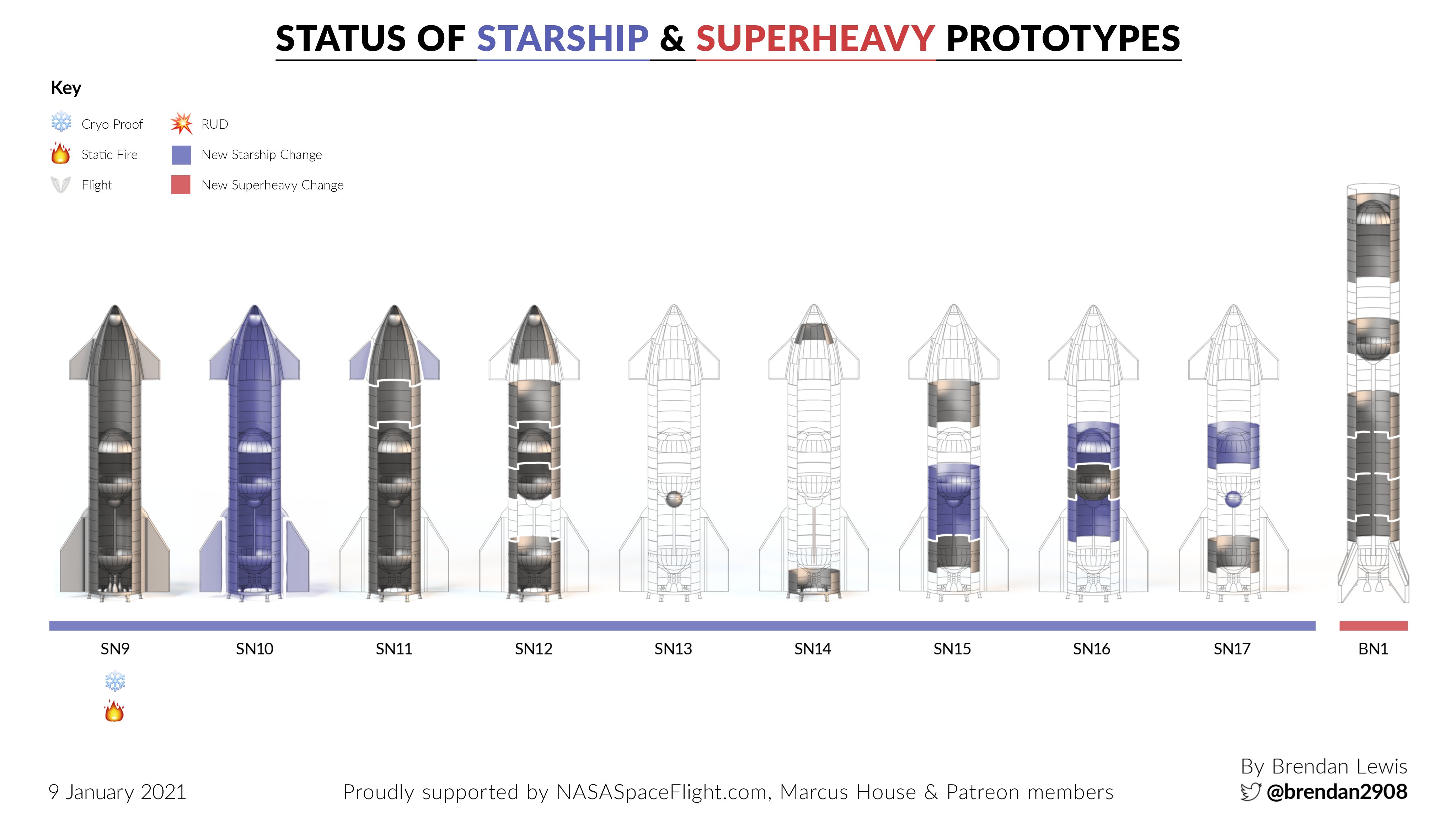 Thus you can see the progress, vs a single SLS core stage under test (that did not properly complete). Which will work in the end? Unclear but fun to watch! (I have my theories).

A commenter notes that if the Grey Dragon mission happens (edit 2021: It did not), two paying customers, on a loop around the moon, (Almost Apollo 8, but not actually entering Lunar orbit, rather a simple free return mission), to expect SLS to be cancelled. I am not so sure, but it would certainly make supporting SLS that much harder.

2021 Update: The Grey Dragon idea did not happen, but a Japanese billionaire did pay to fly 10 people or so, around the moon in the 2023 time frame on Starship. Still looks like this is vaguely on track. With a likely delay of the first SLS demo flight to 2022, we shall see who is first with humans around the moon. Second SLS will need at least 1 year, if nor more for second flight. So 2023 is likely the earliest a manned SLS could fly, but seems unlikely based on past performance.

Short answer, no. Falcon Heavy and SLS Blocks 1B and 2 aren't even in the same lifting capacity category. The former is a heavy lift LV and latter are super-heavy LV. There also seems to be an increasing interest in SLS from the various scientific communities, for example, this slide was shared during the recent MEPAG (Mars Exploration Program Analysis Group) meeting #30: 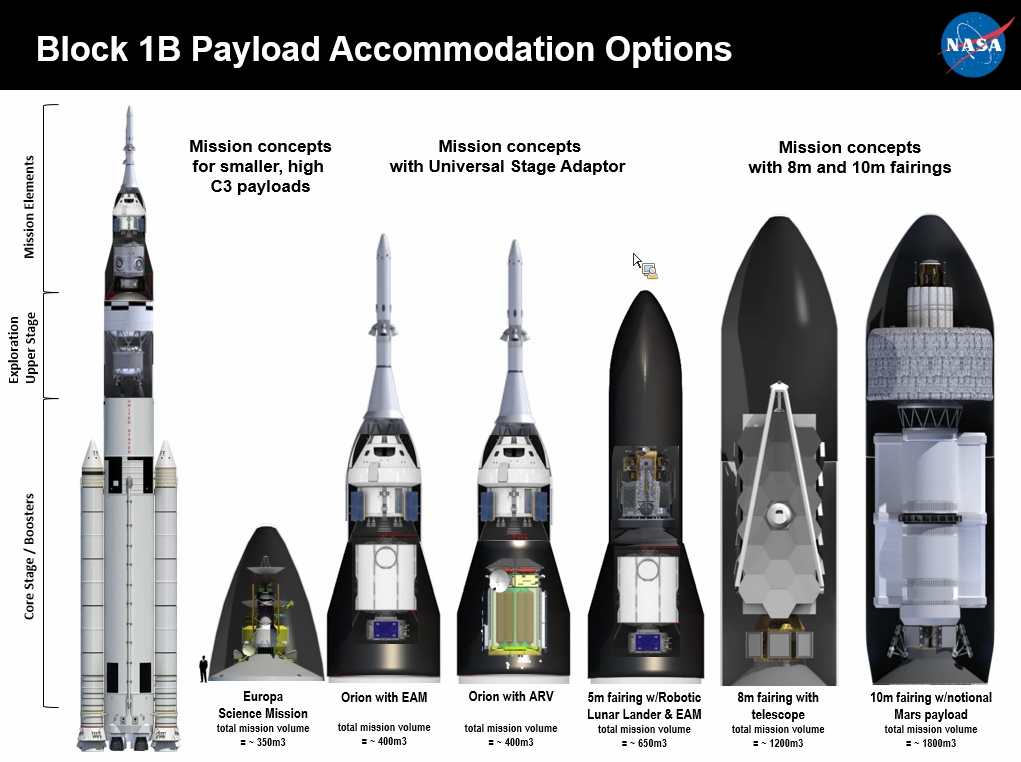 Long answer is a bit more convoluted. SpaceX is progressively increasing FH capability with evolution of its Merlin engines, fuel cross-feed between the two boosters and central core stage, extended capacity upper stage, and so on. It won't match SLS lifting capacity, but they are decreasing that margin. To close the gap (OK, this sounds odd as there isn't any gap to close yet), a whole new rocket will be needed. They also need to build a commercial interest for them, something NASA doesn't have to, so it might not be as trivial as saying Elon can do it. I'm sure he can, but he's not stupid. FH could take a fair share of satellite launches to GEO and Earth-Moon and Sun-Earth libration points. That's a nice business to have, but at least initially, it won't be human rated. That's what they're trying to achieve first with Falcon 9. On the other hand, human rating of SLS is one of its core design requirements. So with it, NASA would be two classes of launch vehicles ahead of SpaceX if SLS, even Block 1B qualifies.

SLS is also a whole lot more than merely a launch vehicle. Even its name (Space Launch System) suggests it's a whole system of components. OK, launch vehicles and recently the Orion Crew Module of course enjoy most interest of the public, but another one of them that is essential to human cislunar space exploration is also Solar Electric Propulsion (SEP) enabled upper stage. SpaceX hasn't anything like it, and while I don't doubt they could eventually produce a competing solution, nothing is really on the drawing board as far as I can tell. Can more traditional propulsion upper stages compete in this department? Not very likely, at least not for complex multiple burn and large delta-v trajectory missions they can't without sacrificing a great deal of lifting capacity for it and lowering your effective payload mass.

So OK, we could diss SLS and call it a Senate Launch System or whatnot. But in reality, while there's many things that we'd still want from it and some might be losing patience with lack of real missions for it, it's a whole different ballgame. It also enables development of a multitude of new technologies that will eventually benefit even commercial companies like SpaceX. Remember, even Merlin 1x engines greatly benefited from NASA Fastrac engine program (and that was eventually a scrubbed program) and share many same or really similar components and designs. So I'm not that pessimistic about SLS. I think of it in a sense that even if it fails, it will produce many spinoffs and advanced technologies that US commercial sector will benefit from, while at the same time keeping highly trained professionals at work. And if it succeeds, and I don't doubt that either, it's really just a question of how well we can use it once it's here, then even better.

I.e. what I'm saying is that in my opinion, SLS can't fail at all. And I realize that this might not be the most popular opinion, but it will also enable future technologies that SpaceX will be able to use with more confidence because they'll be mature technologies by then. And if they scrub SLS, well then SpaceX knows where to get the next big expansion batch of highly trained professionals from. And there might be a whole lot of infrastructure to rent instead of having to build one's own from scratch.

No. Whether the SLS will be continued or not is a purely political decision (as pointed out in the comment by @LocalFluff). One of the main political reasons to keep SLS alive, as long as costs are not dramatically exploding, will be to ensure military (and other governmental) access to space independently of international relationships and of the condition of private companies.

The US are very unhappy to currently be dependent on the Russians for manned missions (e.g.

Dependency on a single firm (even if it's from the US) is also not what is desired.

Not necessarily. Here's a few reasons why:

Not the answer you're looking for? Browse other questions tagged rockets spacex nasa sls boeing or ask your own question.

16
Why isn't the Delta IV Heavy ever used for crewed spaceflight?

9
Space Launch System (SLS) costs
15
Why can the Falcon 9 be reused while the SLS cannot?
9
Why were Solid Rockets chosen for the SLS
8
Is it probable the Red Dragon will successfully land on Mars on the first try?
11
Could the solid boosters of SLS be replaced by reusable Falcon 9 first stages?
13
Will the January 2018 government shutdown affect the Falcon Heavy launch?
5
Falcon Heavy launch to landing time
14
What is this object on the Falcon Heavy payload stream?