Could the sun be used as a gravity assist outside the solar system (with current tech)?

I think I might have understood what this XKCD comic is trying to do. The diagram is proposing to use the Oberth effect at closest approach to the sun to escape the solar system! 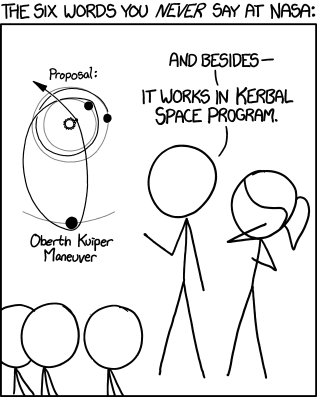 With current technology (something like the New Horizons or Voyager engines), could this kind of assist actually get it outside the solar system?

Additional note: I thought the bottommost planet in the comic was meant to indicate Jupiter. This is apparently a minority opinion on other forums - their logic is that "Kuiper" could refer to a maneuver that ultimately crosses the Kuiper Belt.

No. What a gravity assist does is change the velocity with respect to other objects, but not the one you were approaching. Nasa provided a nice diagram to assist with understanding this. 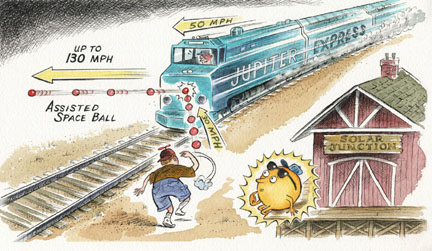 So, enter the idea of using the sun as a gravity slingshot to leave the solar system. It won't work, because the relative speed of flying by the sun won't be changed by flying close it it. One could fly by the sun, use a rocket to accelerate it's movement and leave the solar system behind (Due to the previously mentioned Oberth effect), but that's about the best that could be accomplished by a flyby of the sun. In fact, this was proposed in a paper, which states that if a large amount of acceleration occurs near the Sun quickly, the spacecraft could achieve a speed of 20 AU/year. That would allow for exploring the interstellar medium, but still make it difficult to explore another star.

Hefty gravity wells can give a healthy Oberth benefit. Doing a burn deep in Neptune's well makes sense. Suggesting an Oberth maneuver near a Pluto sized object is pretty silly. Don't know if Randall Munroe knows this. Maybe that's part of his joke.

Heading all the way back from the Kuiper belt to the inner solar system take 30 years. Then back out another few decades. Seeing as a mission to the outer system already takes decades, I don't think mission planners would go for this. They like to see their probe return data within their lifetimes. And it's doable to send a probe out of the system with existing rockets and assists from Jupiter. This is already demonstrated.

However, the sun offers potentially huge Oberth benefits should we want to leave the solar system at a good clip.

At .1 A.U. from the sun, solar escape velocity is about 133.2 km/s. Falling from Neptune, an object would be moving 133 km/s by the time it reaches a .1 A.U. perihelion. From there it would only need .2 km/s to achieve solar escape. Doing a 4.2 km/s burn at this perihelion would give a solar V infinity of 33 km/s.

To go from earth to Neptune would take a 8.3 km/s LEO burn. Once at a 30 A.U. aphelion, a gravity swing by from Neptune could be more than sufficient to throw the ship back to a .1 AU perihelion.

Edit: A 33 km/s solar Vinfnity might be good for doing an inner Oort Cloud object fly by within a reasonable time. But 33 km/s is only a little more than .0001 c. It'd take nearly 40,000 years to reach Alpha Centauri.

The second problem is with PearsonArtPhoto's accepted answer wherein the Sun is assumed to be a stationary object but in fact it is in orbit around the center of the galaxy. Therefore, swinging around the Sun in the direction of its orbit will produce exactly the same sort of gravity assist as going past Jupiter (or any other relatively massive object).

The third problem is that a gravity assist from the Sun is not required to attain escape velocity from the Solar system - we already have FOUR probes that are leaving, never to return - two Pioneers (10 and 11, launched in 1972 and 1973), and two Voyagers (launched in 1977).

Pioneer 10's last, very weak signal was received on 23 January 2003. NASA engineers calculated its radioisotope power source has decayed to where it does not have enough power to send additional transmissions to Earth.

Pioneer 10 will continue to coast silently as a ghost ship through deep space into interstellar space, heading generally for the red star Aldebaran, which forms the eye of Taurus (The Bull). Aldebaran is about 68 light years away and it will take Pioneer over 2 million years to reach it.

Voyager 1 is already in interstellar space, and Voyager 2 is in the heliosheath, and both spacecraft are still sending scientific information about their surroundings through the Deep Space Network.

0
Travel To Mars - Fast
1
Can the sun/Venus be used to slingshot back out into the outer solar system fast?
11
Why is Voyager/Pioneer so slow compared to Parker Solar Probe?
10
What's our limit in sending probes to distant bodies?
4
What are the problems with using the sun for Oberth maneuvers?
1
Is gravity assist provided by black hole as shown in Interstellar possible?