How much can be said about the bedrock of the Moon?

Volatiles in polar craters on the Moon are great, but so far apparently it is unclear how much is there. Though I still have a lot of reading to do, so far I haven't found any information about what the Moon's bedrock might be like. Down there where the surface hasn't been churned by meteor strikes into dust, which has then been baked by solar radiation for eons, can we say whether or not the rock will have some of those volatiles bound into their minerals?

There was a case made in an answer to a recent question on Mars that nitrogen has to be on Mars. It is very common and the whole solar system was formed of the same basic stuff - that's the part that also applies to the Moon. That seems a solid argument, alright (though I'm looking for more sources to get the details, because I'd like to know more). But the Moon's history is so different. Is there good reason to hope that when we make it into a good lava tube, there will be nitrogen-containing minerals to be found? Some hydrogen minerals? Perhaps some carbon?

Do the interiors of rock samples from the moon really represent the composition of the crust, or have they been altered by the impact churning process? Since all of the rocky planets were formed from the same accretion disk, shouldn't a certain percentage of the elements missing from the Moon's surface be there, at some distance below the surface? If not, how were they stripped off?

What we know about lunar bedrock is mostly indirect.

The Apollo and Luna missions returned samples collected from the surface, and missions such as LRO use spectroscopy to analyze the lunar surface. The LRO Diviner instrument

is a multi-channel solar reflectance and infrared radiometer ... It has nine spectral channels which transmit different portions of the visible and infrared spectrum ...

Analysis of the lunar soil returned showed it to be a mixture (as might be expected) showing local variation with chunks from elsewhere.

One thing not apparent in the [Diviner] data is evidence for pristine lunar mantle material, which previous studies have suggested may be exposed at some places on the lunar surface. Even in the South Pole Aitken basin, also known as SPA, the largest, oldest, and deepest impact crater on the moon -- deep enough to have penetrated through the crust and into the mantle -- there is no evidence of mantle material.

Analysis of the fines in the returned samples showed capture of solar wind particles, yielding H, C and N in the 10-100 ppm range (pdf).

Overall analysis of the returned samples gives ground-truth context to the LRO data.

The crust of the Moon is made up of two main types of rock, anorthosite and basalt. Anorthosite is light in color because it is made up of a light-colored mineral called plagioclase feldspar. Basalt is dark in color because it contains the iron-bearing minerals pyroxene, olivine and ilmenite, along with volcanic glass. The iron present in these minerals tend to absorb light, making them appear dark. The light and dark areas on the Moon are composed of these rock types.

Wikipedia has this summary of Lunar Prospector data 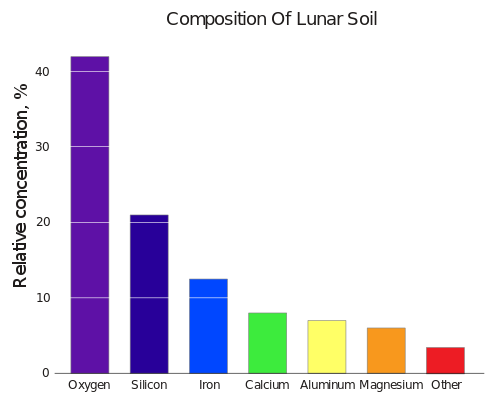 and also this comparison of uplands, lowlands, and Earth: 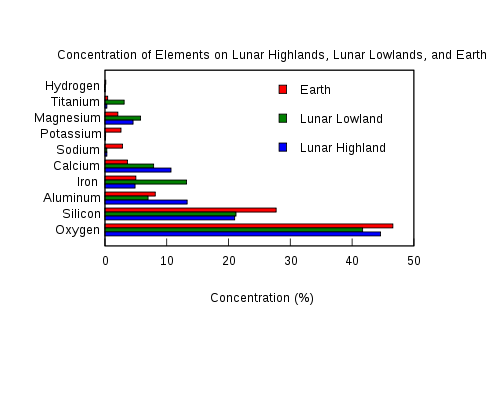 All of this just shows that there is plenty of Oxygen and other useful minerals available, but precious little of other volatiles.

There are some lunar phenomena that suggest volatile deposits beneath the lunar crust. Spudis believes LTPs might be from outgassing of such deposits. If such outgassings do occur, most of would spread across the moon's surface and eventually escape from the moon's gravity well. But perhaps some of these volatiles would find their way to the lunar cold traps.

Francis McCubbins re-analyzed lunar samples and found lunar water may be more common than was earlier thought. However his samples were still very dry -- 64 to 5 parts per billion. Dr. Boyce has argued that the lunar magma may be drier than what McCubbins estimated.

If there are substantial volatiles at the lunar poles, I would bet they come from asteroid and comet impacts on the lunar surface. Some of the volatiles released at impact would spread across the lunar surface, most eventually escaping the moon. But some fraction of the impact volatiles might find their way to the cold traps and remain there when the 30 to 40 k temperatures turn them to ice.

In summary, the origin of the Moon's polar volatiles remains an open question.

35
Would a settlement on Mars need to import Nitrogen?

21
What is the marginal cost of *landing* on the Moon?
13
How much mass could the Saturn V rockets have landed on the Moon if nothing was coming back?
3
Chemical resources on the moon in relation to human occupation
6
What will happen to gas released from the Moon's Surface?
2
Has SpaceX said much publicly about uncrewed landings on the surface of the Moon or Mars?
2
History of investigation of lunar and Martian surface gravity