Why do ISS astronauts use lower quality microphones for official radio communication than for PR events?

In the first seconds of this video you can see/hear ISS astronaut Samantha Cristoforetti prepare for a PR event:

During the preparation she uses two different microphones. A small, blue box-like one for communication with mission control, and a larger, cylindrical one for talking with the interviewer. The latter has a much superior voice quality.

Having two different microphone systems on the station seems quite redundant. Why don't the International Space Station (ISS) astronauts always use these high quality microphones?

That blue box is a wired receiver unit for the wireless microphone (they currently use a Sennheiser handheld with SKP-100 wireless transmitter, but they did or still do use also products from other companies, inc. e.g. Shure that I know they flew during some STS missions to the station). The box also hosts its own microphone because the wireless microphone does need charging (EPO - Education & Public Outreach events usually last about half an hour or less, while they're in contact with CAPCOM throughout the working day on the station and the small battery pack it has wouldn't last that long without requiring a few battery swaps) and it might be awkward to use in some circumstances and not having to worry about a free-floating microphone might be easier too. For example, here's Karen Nyberg speaking into a microphone while conducting a session with the Advanced Colloids Experiment in the Destiny laboratory: 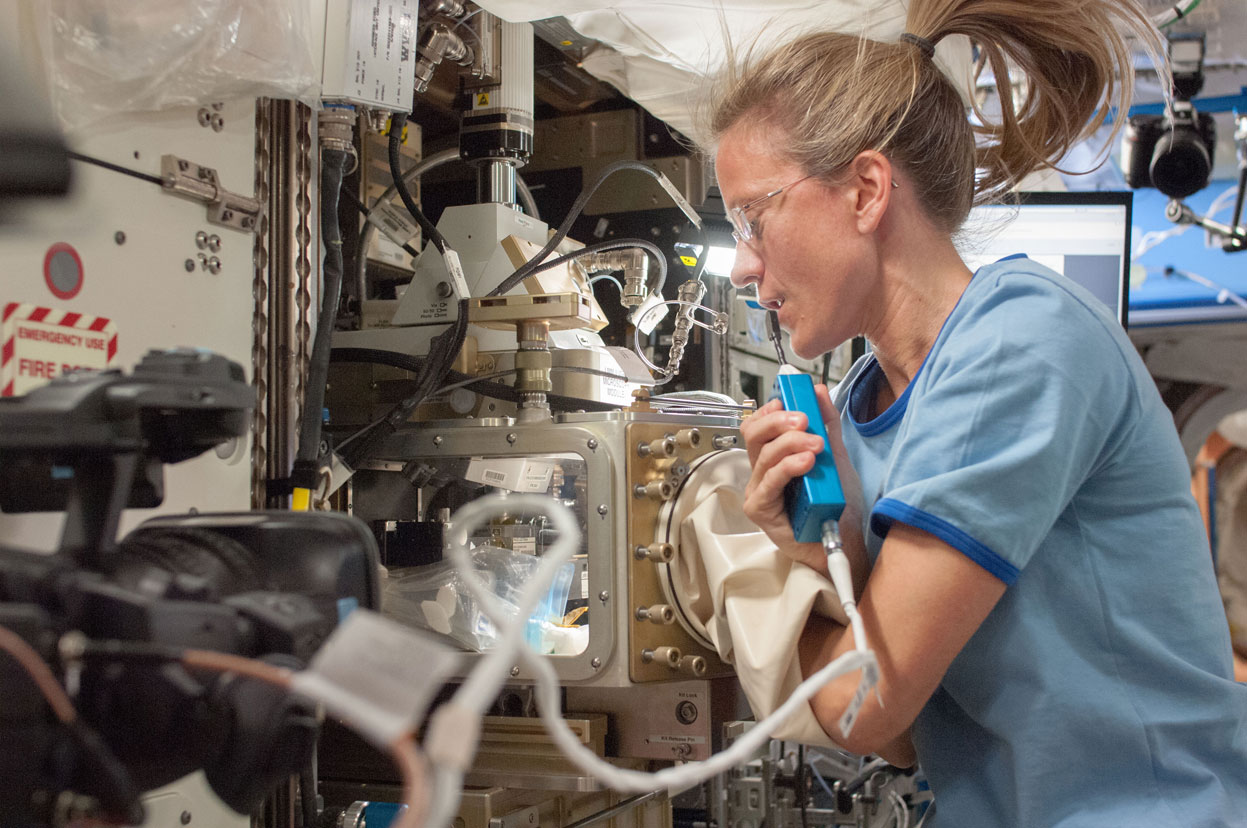 The box has two large buttons that while I can't seem to find any supporting document to their purpose can really only be to toggle the wired and wireless microphones on and off and adjust their volume during communications with CAPCOM (Capsule Communicator):

CAPCOM communicates through the use of voice loops (collections of audio communication from individuals which are tied together on an intercom through a satellite link). CAPCOM also coordinates crew communications with other spacecraft communicators supporting the mission which may be in other locations - such as Huntsville, Alabama; Munich, Germany; Tskuba, Japan or Moscow, Russia.

Here's a photo of Shannon Walker on the station showing the box with the two buttons and a microphone behind her a bit better: 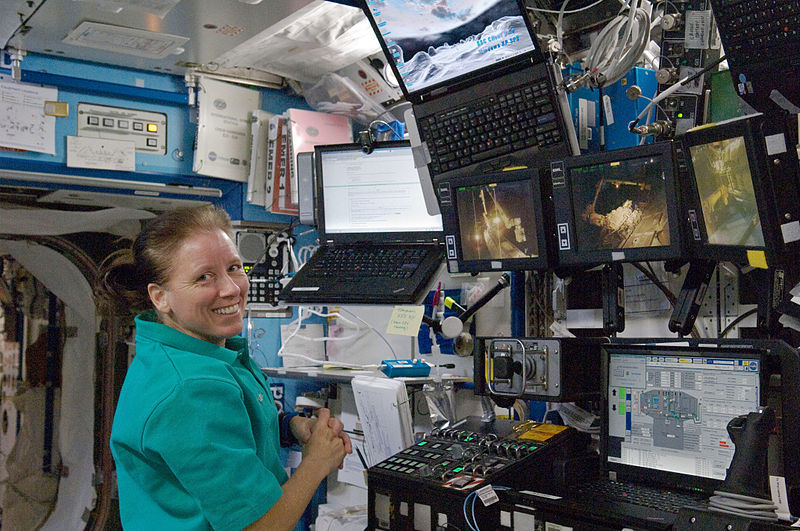 So in the video you link to, Samantha Cristoforetti would first have to reach for the receiver unit to enable both microphones to pass through the intercom voice loop anyway. But in majority of cases, having watched quite many public events from the station (available either live on NASA TV or recorded on NASA YouTube channel), station astronauts would mostly use the better quality wireless microphone.

The high-fidelity microphones (as used in broadcast media, for example) are all about relaying the highest quality sound signal, and may compromise other aspects such as reliability, tolerance of extreme environments, battery life, etc. because the primary market for them can accommodate their limitations one way or another.

On the other hand, in space, reliability is king, along with minimizing weight. Mission control doesn't need to hear music from the ISS; as long as the microphone can reliably convey an intelligible speech signal, that's all that counts.

Hi-fi mikes are good for music (any decent one should handle something like 20Hz-20kHz, a typically quoted range of human hearing); the useful information in human speech is conveyed in a band from 300Hz-3kHz. Frequencies outside that band can be completely removed from a sound signal and we can understand the speech content within it. Getting good reproduction over 20-20kHz is not that easy, and a mike which can do it will probably need to be handled with some care. On the other hand, mikes capable of speech bandwidth can be made relatively easily and can be quite robust.

For everyday communications, and especially when it's just got to work, the lower-fi higher-reliabilty mikes would win out. When it's a press event, makes sense to bring out the media mike, with the hi-rel always there to back it up.

Pure speculation on my part.

To anybody not habituated to listening to radio communication, static/radio-interference may necessitate multiple 'takes'. This may be the case with the majority of viewers. The larger microphone probably carries some on-board signal processing, and high-gain instrumentation. In short, investing in the microphone potentially helps keep down the cost of the PR (+:

On the other hand, mission control probably communicate over the radio day-in, and day-out. They can do without the overheads mentioned above.

p.s. As I said, pure speculation. Feel free to down-vote!

Not the answer you're looking for? Browse other questions tagged iss communication technology crewed-spaceflight procedure or ask your own question.

2
why do astronauts in the ISS still use wired microphones?

34
What kind of laptops do ISS astronauts use?
22
What is the procedure if communication with the ISS is lost for an extended period?
10
What language does ISRO use for radio communication?
6
What would be required for Orion to ferry astronauts to the ISS?
4
Quantitatively, why will optical communication be better than X-band for deep-space communications?
5
Any official size for the ISS pizza box?
6
Why is the Orbital Velocity after SECO of Crew Dragon with 27K km/h lower than of ISS?
2
What do "initiate dragon safe haven" and "close all centerline hatches" and "next two crossings" mean?