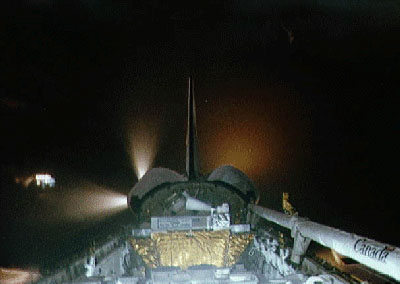 Since this question was posted, plenty of exhaust plumes have been filmed from the ground giving a nice impression of the long term expansion behavior.

So, no, I wouldn't call it bulb shaped, but yes, the exhaust expands in vacuum. It is most clearly visible when the launch takes place shortly after sunset or shortly before sunrise when the sky is mostly dark while the plume is illuminated by sunlight.

16
Are rocket exhaust flames ever opaque?
3
Orbital ATK’s Cygnus 2nd stage exhaust plume
3
Does velocity of the exit gasses of a rocket affect visibility of the plume?
16
Why is the exhaust plume of Falcon 9 upper stage shaped the way it is?
3
Why does the exhaust plume apprear to be throbbing?
2
What is the plume effect?
2
Merlin 1-D Vacuum - Side Exhaust Noted in Flight Videos