Are there any effective ways for removing/decreasing oxygen in a habitat on Mars?

A MIT Mars-One Study found that "crop growth, if large enough to provide 100% of the settlement’s food, will produce unsafe oxygen levels in the habitat".

Assuming this to be true, are there any effective ways for removing/decreasing oxygen in a habitat on Mars?

The MIT article came to the conclusion that venting the excess oxygen was necessary, which had the adverse effect of destabilizing the breathable atmosphere.

Since oxygen is "readily reactive with other elements" (Chemistry of Oxygen), it seems like there should be an alternative way to decrease/remove excess oxygen from a habitat's atmosphere. What am I missing?

I had come across a blog post on this subject soon after the report came out. That answers your question just as well as anyone else could.

My main take-away was that the problem is totally solvable. What the MIT report accomplished was that it forces anyone looking at the data to not accept the present Mars One architecture. Honestly, I found this confusing because I haven't seen an architecture specific enough to make such claims in the first place, and even the papers reference list doesn't clear this up easily.

In order to solve it, the blog post proposed either a controlled burn or keeping animals. Either way, it's still a drain on the burnable matter, and possibly food, available.

However, the main problem (as far as I can tell) is Nitrogen. See the following graphs from the report, because this is critical: 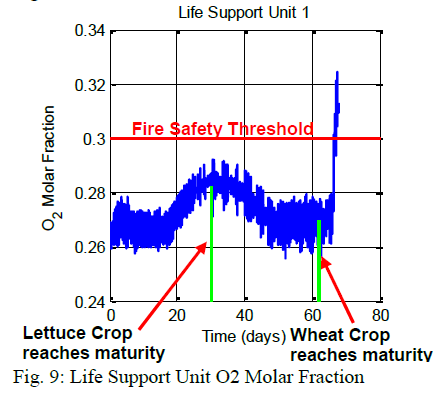 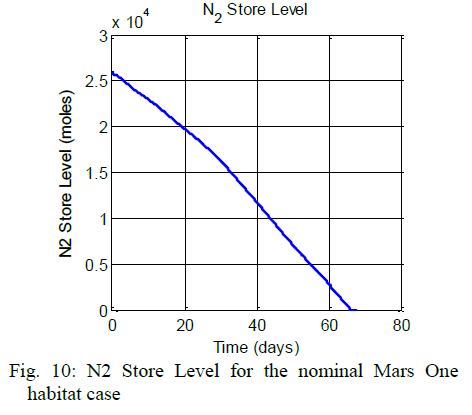 Oxygen fraction goes up and down, but clearly it is actively maintained by the station's systems. However, if you look at the N2 stores, it's pretty darn obvious that one of those systems involves venting gas. Oxygen is continually produced by the plants, but the Nitrogen comes from a finite supply.

The story becomes pretty clear with these two components. After you've vented all your Nitrogen out of the habitat, you will not longer be able to maintain both a) low O2 molar fraction and b) sufficient total pressure. To me, this seems pretty obvious from the point that we're venting atmosphere in the first place. You can't just throw away the gas which can only come from Earth.

CO2 is easy to get on Mars but in-situ Nitrogen production is vastly beyond the tech level that we're looking at for the Mars One scenarios. So venting it is fairly flagrantly unsustainable, and whether the colony lasts 60 days or 400 days seems like an unimportant distinction. You won't launch missions with this being a credible scenario.

If the plant matter to burn couldn't be produced easily, it could still be a problem. To whatever extent that is true, then MIT has pointed out a very large planning problem for any mission of this general type.

If you'll accept some solutions that involve heavier machinery and a greater mass penalty, I would tend to think that either gas separation or storage could address this. If you just compressed the air O2/N2 mix then it could hang out long enough for some heterotrophs to get there and draw down the O2 quantity. Alternatively, if you could concentrate the O2 and then vent, that could be sustained as long as you need.

I could be wrong, I hope I've understood the problem correctly. I would sooner call it a "Nitrogen" problem than an "Oxygen" problem.

The current plan calls for too many plants which will create too much oxygen. Solution: less plants, more mushrooms and add pygmy goats.

Fewer plants will reduce the creation of excess oxygen. Adding mushrooms will reduce the oxygen and add CO2 to the habitat. Adding pygmy goats will also reduce oxygen and add CO2 to the habitat. Also the goats can add milk for part of the year, occasionally meat, and they can eat inedible parts of the plants humans can't eat. The goat waste is also good for fertilizer.

Oxygen is quite easy to remove from air. An extreme measure would be to light a fire. But there are numerous other chemical reactions that will do it too. A lot of metals oxidize on contact with oxygen for example. And of course there is breathing... A vigorous workout. Raising animals...

9
What is the ideal location for a human habitat on Mars?
5
Is there a cost effective way to obtain Nitrogen/Argon on Mars for usage in a human breathable habitat?
9
Are there any designs for a Mars Habitat made out of stone?
2
What are the challenges in building a supercritical CO2 gas turbine power plant for a Mars habitat of 6 astronauts?
7
Is there an end-of-mission for Mars One?
12
Are there any possible methods for keeping surface water on mars?
6
Are there still more images of caves on the surface of Mars that could be easily made accessible for humans?
3
Effective bandwidth for Mars rovers to Earth
7
Are there any studied landing sites on Mars for a crewed landing?