Could the space shuttle be permanently left in orbit as a space station?

Could the space shuttles have been left in space and used as temporarily visited space stations? One could put a modified spacehab in the cargo bay, with solar panels and with which the Soyuz/Dragon could dock. Wouldn't it have been a cheap and capable alternative to the ISS? Could its systems for life support et cetera work long term? Could they have been put to better use than as museum pieces, with some planning and minor modifications, or is it completely crazy? (I realize that they are not launchable anymore).

Or maybe more realistically, couldn't they simply have been left as modules docked to the ISS? They would've provided some extra working space for the crew, boosting capability for orbital station keeping, RTG power, cargo handling, independent life support and an emergency landing system. The whole point with landing them was to reuse them. Well, they weren't reused after the last landing, so they should never have been landed the last time. 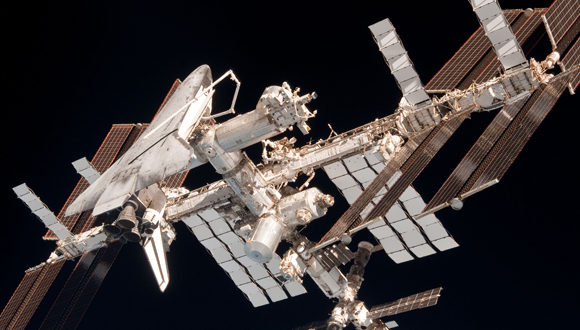 Endeavours last visit at the ISS, seen from Soyuz. Could it have stayed there?

The Shuttle was designed for missions of around 10 days. With the Extended Duration Orbiter system added, missions could be 14-19 days long. STS-80 was the longest actual mission at 17 days. Mission lifetime was limited by fuel for the fuel cells which power the Shuttle.

The EDO pallet weighed 3.2 tons fueled and was 4.5 m in diameter and (my estimate) 1.5-2 m long. NASA considered fitting a shuttle with 2 pallets for missions of up to 28 days. Another limit is life support: CO2 removal is done by lithium hydroxide canisters which need replacement every 12 hours.

So the Shuttle needs a lot of consumables to keep working. I suspect when the Shuttle was docked to the ISS, it relied on the ISS life support system (haven't been able to find references for this yet).

Yes. This was actually studied during original ISS design talks post Challenger accident as a way to get a station up more quick and at lower cost.

That proposal though wasn't really about just leaving the shuttle as is in orbit but modified for that purpose. The proposal would take shuttle Columbia and stip it down, remove wings, landing gear, tail, heat shield etc, basically remove anything needed for reentry and landing since you'd never need it.

This would have made the shuttle able to carry significant larger up mass giving it orbital lift approaching 90tons. Rather than use spacelab they would be into the cargo bay a permanent module with necessary docking adapters for expansion. Radiators would be incorporated into the cargo bay doors and where the wings use to mount would be two massive solar arrays which would fold out once in orbit.

Obviously the plan never got far but it would have saved ton of money, gotten us an operational station out the gate and actually much more rack space than current ISS.

Not the answer you're looking for? Browse other questions tagged iss space-shuttle space-station or ask your own question.

9
How long could the shuttle remain docked to ISS and still capable of landing?

10
If NASA's plan is to launch 4 astronauts to the ISS on CCtCAP vehicles, why design for 7?
12
How much of the International Space Station annual operating costs are due to human crew?
6
Does the cargo type to ISS differ between different carrier spacecrafts such as Progress, Dragon, HTV, Cygnus?
33
Why didn't NASA use the shuttle to make a profit?
9
How long could the shuttle remain docked to ISS and still capable of landing?
2
How to replace and refurbish the EMU suit used at the ISS?
13
How was the Space Shuttle Orbiter used for ISS Reboost?
17
Challenger Shuttle: could the crew have survived?
19
What can the ISS do that a SpaceX Starship could not?
22
Space Shuttle Challenger bringing back Salyut-7