I found the following to be interesting. It appears that for the most part (Apollo 15, 16 and maybe parts of 17?) there were restrictions placed on the distance allowed for the LRV to travel. The astronauts should be able to walk back to the LM should the vehicle for any reason break down, which seems reasonable, it seems outrageous to bet your life that this car will not break down.

An operational constraint on the use of the LRV was that the astronauts must be able to walk back to the LM if the LRV were to fail at any time during the EVA (called the "Walkback Limit"). Thus, the traverses were limited in the distance they could go at the start and at any time later in the EVA. Therefore, they went to the farthest point away from the LM and worked their way back to it so that, as the life support consumables were depleted, their remaining walk back distance was equally diminished. This constraint was relaxed during the longest traverse on Apollo 17, based on the demonstrated reliability of the LRV and spacesuits on previous missions. A paper by Burkhalter and Sharp provides details on usage.*

My question is, when the restriction was lifted, how far away was the furthest distance from the LM that was achieved? Not total distance driven on one EVA, but longest distance in a straight line from the rover to the LM.

Is there a picture of this record? I'd love to see it.

As an aside (but closely related): How reliable was really this vehicle? Is the Wikipedia statement accurate, that the vehicle was "so reliable" that they lifted this restriction?

I have found that the LRV apparently has redundancy in its power system (two batteries) and redundancy in its steering system (front and back can be steered, and one system can be disconnected independently of the other).

However this note from EVA-3 on Apollo 17 seems to suggest the LRV was not perfect:

[Gene and Jack have driven a total of 36.0 kilometers and have used 57.2 amp-hours -plus another 14.8 amp-hours for LCRU operations - out of the 242 amp-hours available. Their average use rate of 1.58 amp-hours/km is similar to the 1.67 am-hours/km used on Apollo 15. The use rate on Apollo 16 was nearly twice as much due to an unexplained malfunction.]" 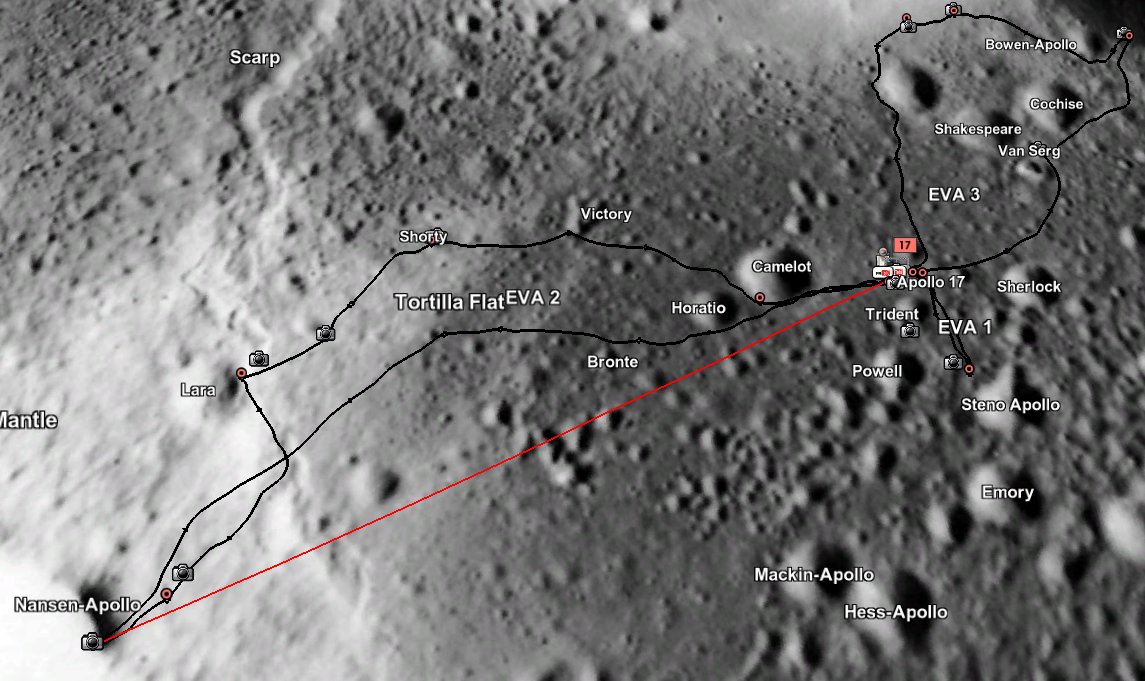 If you want to look at the map, open Google Earth, and in the menu bar at top click on View > Explore > Moon. All of the Apollo missions are indicated by a little astronaut icon on the place where they landed, holding a little flag with the number of the mission. Make sure the 'Moon Gallery' box is checked in the Layers section on the bottom left.

For whatever reasons and before the Apollo 16 flight, NASA had already made a rule limiting the farthest distance that the rover could be from the LM, to five miles. Apollo 16 astronauts tried to persuade NASA that should the rover break down, they could get back to the LM from a distance of 10 miles, and demonstrated the fact on earth at a NASA facility by jogging 10 miles in simulated one-sixth gravity and wearing their space suits. NASA wouldn't budge.

37
What if Apollo Lunar Rover failed on the Moon?

15
Why didn't Apollo land on the Lunar poles?
40
If the Apollo mandate were delivered today, would the mission vehicle(s) and profile be similar?
21
How did astronauts navigate the Lunar Roving Vehicle (LRV) over the surface of the Moon?
25
How did Apollo-12 manage to land next to Surveyor-3? First "Space-Tourists"?
3
What was NASA's “LUROVA” Operational Thermal Computer Model analog or digital? How were capacitors used?
8
Were flown lunar rover miniature license plates approved for the Apollo-15 flight?
29
Could the lunar module have moved to a different spot?
3
Other than Surveyor 3, were any landers within rover distance of Apollo?
4
Did the Apollo Command module really "skip" within, or off of the atmosphere as a part of its reentry program?
8
Were the Apollo astronauts constrained in how they could set their PLSS cooling?