Is there any rule for rocket engine nozzle proximity from each other?

I wonder if there is any rule for how closely you can put engine nozzles to each other. Are there any vibration, heat, etc. constraints when you are assembling two or more engine bells together?

Saturn I had four central engines very close, with the external gimballing engines more distant. I know that the outboard ones were placed there, among other things, to allow better pitch, yaw, and roll authority. But are there any limits for clustering engine nozzles? 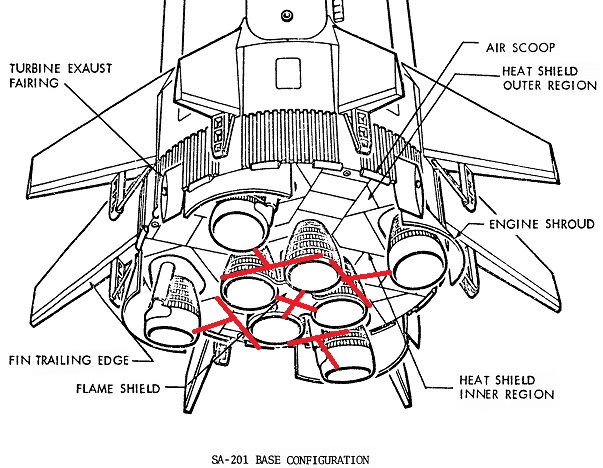 Obviously there are differences between implementations that will make a general rule very hard to define.

For example, on the Space Shuttle, the 3 SSME engines were close together, and the two SRB's offset nearby. But when they looked at 4 or 6 RS-68A engines between the two SRB's for one of the many SLS/Ares iterations they found the heat load was too high.

As a contrast the 5 F-1 engines on the Saturn V were clustered pretty close together. The 9 Merlin 1C on the Falcon 1.0 in the tic tac toe pattern, then the change to the Merlin 1D on the Falcon 1.1 in the Octaweb pattern.

Thus I would argue that generally you can cluster them as close as they can handle. But the parameters there depend on the engines specifications. Or to put it more simply "It depends". Odd how often that is the answer.

Not the answer you're looking for? Browse other questions tagged launch engine-design nozzle thrust or ask your own question.

20
Was the third shuttle engine any different from the others?
2
How much efficiency is lost from a fixed De Laval nozzle when modified for atmospheric use?
5
How can phenolic (resin?) handle rocket engine nozzle temperatures?
0
Analytical approximations for the shapes of these plots of ISP vs nozzle diameter? (Raptor engine)
1
Is there enough energy in a rocket nozzle for fission?
5
Issue with units for a rocket nozzle throat area problem
3
Do pulse detonation rocket engines require any type of nozzle?