A rocket launch generates a huge volume of gas which are then deflected in different directions. 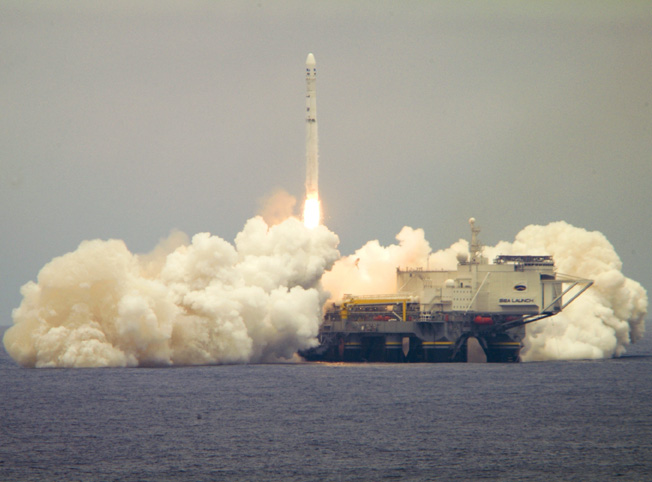 Ejected gas have the potential to move the deflecting panels, so the platform itself.

For Sea Launch Odyssey, the platform is lowered into the water before the launch:

Both pontoons have three ballast pumps, allowing the Odyssey to partially submerge down 21.5 meters (70 feet) in advance of the start of launch operations to provide for a stable launch platform.

Is that the main method used for the stability of the platform? Does that limit the rocket engines thrust to some known maximum? How does it compare to land-based sites?

Sea Launch uses a Zenit 3SL, which was derived from the side boosters of the Energia booster. Each one uses an RD-171 engine, which has 4 exhaust bells, but one turbopump assembly, thus counting as one engine. It puts out about 1.7 million lbs of thrust.

That is as much or more than a single F-1 engine from the Saturn V. That is twice what an Atlas V (using an RD-180, which is basically half an RD-171) produces. That is more than a Falcon 9 v1.1 and possibly even the new upgraded engine model. A Proton at 1.9 million lbs thrust is possibly higher.

So right now, there is not really anything to limit the Zenit booster. There is only one operational launch vehicle that generates more thrust at liftoff.

Regardless an oil platform, which the Sea Launch platform is derived from is quite a bulky/massy object, designed to handle pretty heavy weights and high seas, thus a lot of momentum would need to be transferred to it to move it. Lowering the pontoons increases the stability a huge amount.

Thus the basic answer is that yes, it is the main method of stability, it does not limit the thrust since there is really only one possible active booster that is significantly higher (Ariane V).

The thrust is not exhausted on the surface of the launch platform at first, rather through a mostly open hole to the ocean below. Then as the rocket leaves the platform it of course spreads out, but this diffuses the affect over larger and larger areas, thus reducing it very quickly.

Not the answer you're looking for? Browse other questions tagged launch launch-site thrust sea-launch or ask your own question.

15
How close can I get to a rocket launch and not get killed?
8
Who sells RP-1 to SpaceX and other commercial launch companies?
73
Why is the American space program launch site based in Florida and not Texas?
3
Relation between Orbital Inclination and launch site?
6
Why are lightning towers at launch pads topped with big hollow tubes with spiral windings and not "lightning rod-shaped" lightning rods?