The atmosphere of Venus contains strong winds and is said to have a "super rotation" because the atmosphere (above a certain altitude) moves faster than what the ground does.

No one can disagree with the fact that the atmosphere moves faster than the ground at most altitudes. However, does the wind pattern literally rotate around the planet as the common wording implies? Or... does the atmosphere actually zig-zag from the day side to the night side (nonetheless faster than the ground movement), making the common description of "super rotation" a popular misconception? This is one case where I think that pictures ask the question better than text:

This is just one example. I think that the underlying notion is pretty obvious. 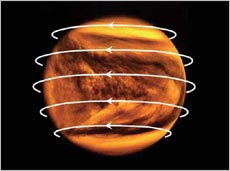 This illustration comes from the Wikimedia Commons. It is, in fact, the most detailed illustration of the wind pattern on Venus that Wikipedia has. In spite of my trying, I can not find any evidence that the image was ever depreciated and removed from the relevant English page due to changing science, or the less relevant page for that matter. The image timestamp actually predates the corresponding article, which casts suspicion on the accuracy of those time stamps in general. Overall, the use history is very unclear to me. Also note, here is a site which might be the source and contains the diagram in English. 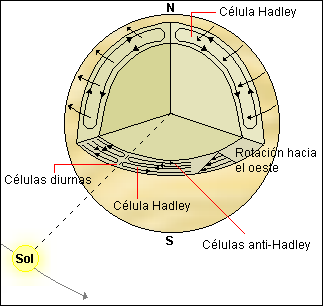 Please do not mistake this illustration for the one currently displayed on the Wikipedia page, since that one shows Meridional flow only. This question is strictly about zonal flow.

Mechanistically, I can understand the Zig Zag a lot better since the sun's heat is the driving force. If the pattern was a true rotating, then where is the driving force coming from? There's not choked flow coming from the cold side or anything like that, so the driving force from the expansion of the gas due to heating can't exert a net-force along latitude lines. But it's difficult to track down the science, since I can't tell who is just incorrectly recounting something they heard from somewhere else, and who actually understands.

So which is it? Does the wind pattern really rotate, or does it just zig zag?

I think this is the closest to a true answer I've seen: 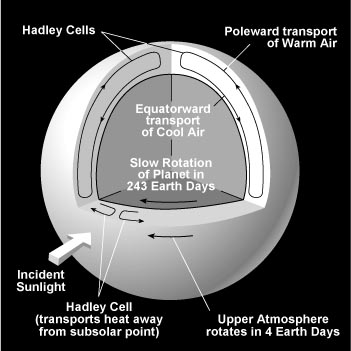 Both the image and the explanation seem to suggest a super-rotation that exists above a lower layer of Hadley cells. Even the original image that I posted depicted both things on the same image, although it wasn't clear what the relative locations were. I also read somewhere (can not remember where now) that Hadley cells are what give momentum to sustain the super rotation. If I imagine some kind of asymmetry at the boundary between the two (not difficult to do), then it can make sense.

Not the answer you're looking for? Browse other questions tagged atmosphere venus weather or ask your own question.

32
Why is the rotation rate of Venus so slow?
13
Is it more challenging to put an airship in the Uranian than in the Venusian atmosphere?
24
How does Venus' thick atmosphere survive against the solar wind?
5
Mechanical computing hardware for a future Venusian rover? How does it work?
35
Could the Saturn V actually have launched astronauts around Venus?
5
Does turbulence make sky cities infeasible on Venus?
16
Are rockets faster than airplanes?
2
Is the retrograde (clockwise) rotation rate of Venus speeding up or slowing down?