What is the point of ULA's IVF? (Integrated Vehicle Fluids)

ULA (United Launch Alliance) mentioned a new upper stage they are working on that will use IVF. Sounds like an internal combustion engine, running a generator, fueled on propellant and oxidizer that would otherwise be vented.

Ok, clever way to generate power on an upper stage, since a IC engine can be small and efficient. Burning hydrogen is simple and known technology.

But they keep talking about how this makes it reusable? But really it sounds like it just provides power, removing the need for solar panels, batteries, hydrazine driven generators, etc. A nice feature, but how is this a game changer?

Sure this means the second stage can stay alive much longer, but right now, that does not quite seem to be the major bottleneck?

The main reuse suggested seems to be refueling in orbit. But again, that is not entirely what is usually meant by reuse in this context.

N.B.: this is based on my current understanding of the technology, and it may not be complete.

The critical points are that IVF eliminates the need to carry pressurized helium, which is typically used in turn to maintain the pressure in the stage the LO2 and LH2 tanks as propellant is depleted. It also eliminates the need to carry hydrazine, a fuel that is hypergolic with LO2 and is typically used to power the thrusters used for e.g. attitude control, gimbaling, and the like. Instead, gaseous oxygen and gaseous hydrogen from the IVF system fill both of these roles.

This means that the onboard consumable fluids are reduced to just liquid oxygen and liquid hydrogen – greatly simplifying an on-orbit re-fueling procedure.

Here's a great source showing block diagrams of a typical configuration vs. IVF:

The main advantage of IVF is described by ULA as weight-saving measure (~1 ton) for longer-duration missions, compared to batteries / photovoltaics / fuel cells:

An existing Centaur goes from a vehicle with nominal two main engine burns and 8 hour flight duration to one capable of 10+ burns and flight durations measured in multiple days. Burnout mass is reduced by 10% and propellant residuals can be used to dispose of the stage without mass or cost penalty.

It's claimed to be a very efficient use of chemical energy, too. Because the combustion heat is reused for tank pressurization, and the exhaust stream is reused as reaction mass, almost none of the energy is wasted.

From your other question, one of the three claimed benefits of Vulcan is the 10x greater (mission) duration, which seems to be provided entirely by the use of the IVF internal combustion engine: 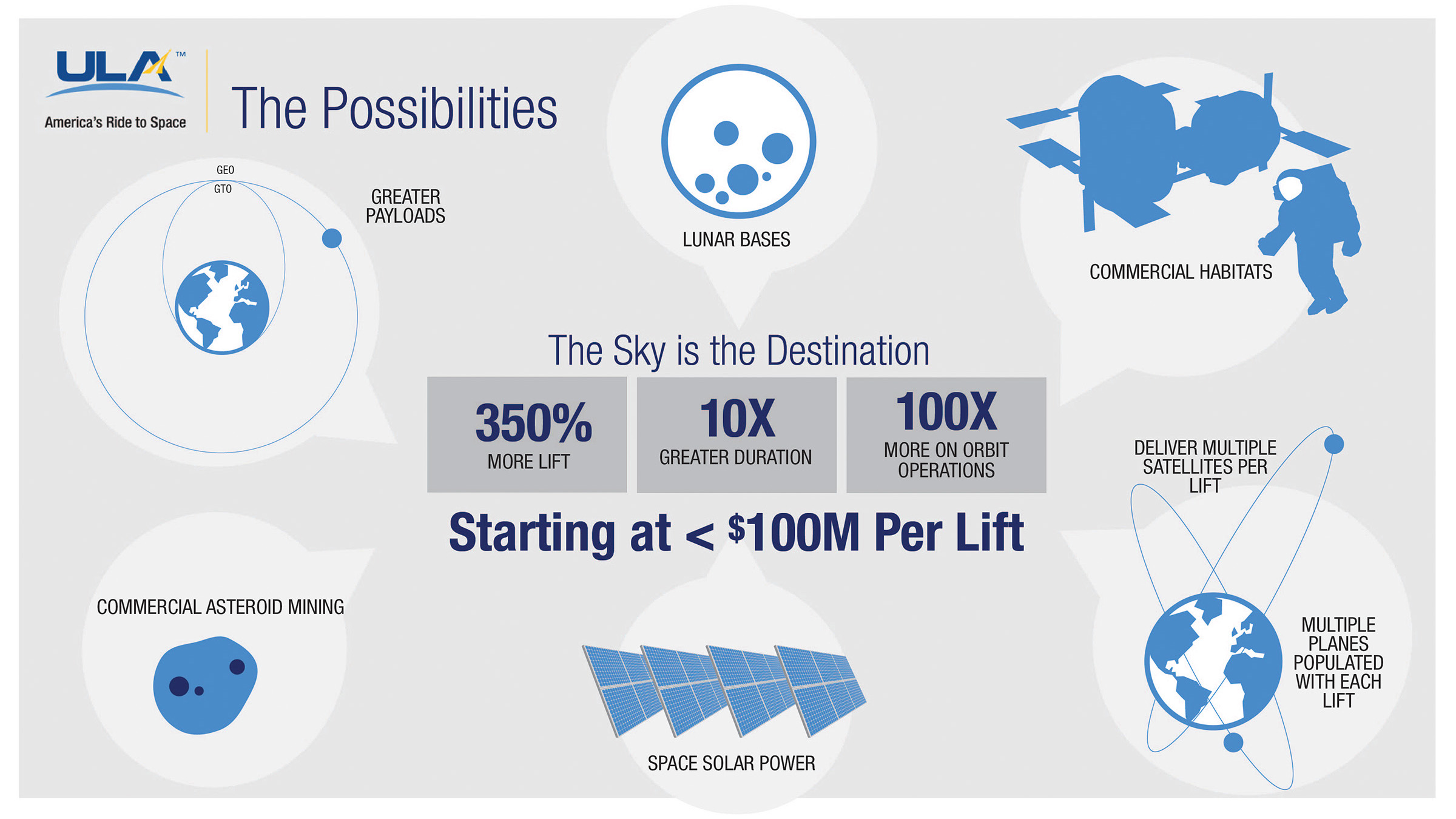 Not the answer you're looking for? Browse other questions tagged launch upper-stage ula vulcan or ask your own question.

28
SpaceX CRS-5 Launch: What is the footage that appears to contain bubbles?
4
What are the actual economics for the ULA reusability plan?
4
What is the basic optimal trajectory for a launch vehicle?
1
What is the Oxidiser/Fuel Ratio of the Atlas V Centaur Upper Stage?
9
ULA's ACES upper stage with IVF - Why are they using internal combustion engines?
5
Was ULA's mobile clean room on the ground floor or up near the top of the rocket? What were the logistics for getting Perseverance up there?
3
What is the difference between the Vulcan 562 configuration and the Vulcan 5H2 ("Heavy") configuration?
9
What do the banana values mean in this tweeted plot of heavy lift vehicle capabilities?