Could the Bloodhound Rocket Car be launched into orbit?

The Bloodhound SSC (Supersonic Car) currently being constructed to break the 1000 mph barrier is powered by a Hybrid Rocket (Solid fuel + HTP) and a Rolls-Royce EJ2000 Jet Engine: 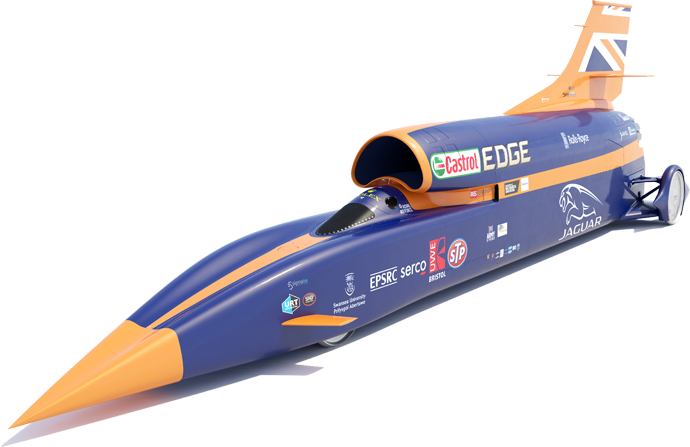 Considering the enormous thrust power, I did wonder, if it was mounted vertically could it be launched into orbit? Some of the outline data points necessary to compute the possibilities are shown on the web site:

Or perhaps, it might suffer the fate of the last British attempt to put a car in orbit (A rocket-powered Reliant Robin on Top Gear): 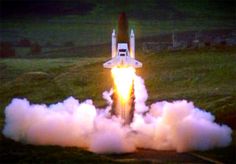 Obviously, it has the power. It's not going to work for two reasons, though:

1) Note that some of that power is coming from a jet engine. That will cut out long before you reach orbit.

2) The big issue is that it takes about an 8 minute burn to reach orbit. The car burns it's fuel in one minute despite being more than 1/5th fuel and not producing as much acceleration during that time. Adding more fuel means you have to have even more power to push it needing even more fuel.. The rocket equation is brutal.

Either the 90kN jet or the 120kN rocket alone does have enough power to lift the weight of the car. If you balanced it properly and pointed it upward, firing the jet first and then switching to the rocket when the jet ran out of usable air, it'd definitely go up.

Keeping it stable would be very difficult. The jet and rocket motors are vertically offset; you'd have to reorient them slightly to thrust through the vehicle's center of mass, and the center of mass shifts as it consumes fuel. For use as a supersonic car, its aerodynamics are going to be designed to produce down-force to hold it down on the track; you'd have to redesign it to go the direction it's pointed.

Loren Pechtel's definitely correct that it would have nowhere near enough fuel to make orbit, though.

In addition to the above answers, the oxidizer for the rocket is fed by a pump. This pump is driven by an internal combustion engine, which needs air to function, so it, like the jet engine, will run out of power at high altitude.
And the car is designed for a range of 18 km, about half of which is powered (the rest is braking). It will be refueled after every run.
So you have a vehicle capable of 450 m/s (*) with a powered range of 9 km, while to be in orbit you need 100 km and 7 km/s.

Not the answer you're looking for? Browse other questions tagged launch rockets propulsion engine-design thrust or ask your own question.

15
Highest number of satellites launched on a single rocket
19
How does a single rocket place multiple satellites into orbit?
6
Why not plug it into the wall?
22
Can a rocket be launched while it rains?
29
Why doesn't the US use European rocket engines?
5
Splitting water quickly to turn a water rocket into a H/O rocket at launch: could it work?
17
Where does the thrust act in a rocket engine and how is it transferred to rocket structure?
3
Could rockets launched from the ground use wings in the stages?
6
Could a balloon or airplane launched rocket get humans into orbit?