Could Falcon 9 splash down IN water?

Why don't they let the Falcon 9 splash down IN water, and then recover it? Wouldn't this reduce both fuel use & potential damage?

The first several attempts to recover the Falcon 9 did include water landings: 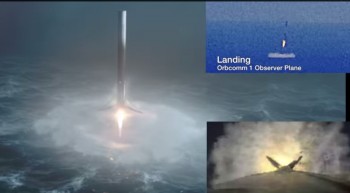 However there are many problems with water landings.

There's no way for the Falcon 9 to remain upright on water. To get an idea of the magnitude of the problem, try standing by a swimming pool and falling forward face first into the water. It's going to hurt. Now do it while being fifty meters tall and weighing 28 tons.

According to Elon Musk this can cause kaboom (technical term).

All attempts to recover the rocket intact after water landings failed. Although one core survived the 90° fall it quickly broke up from wave action.

Moreover, even if the stage survived tipping into the sea there's the problem of salt water corrosion. Salt water is really nasty stuff if you're a rocket. After a dip in the sea actuators are going to need striping down and rebuilding, combustion chambers are going to need careful cleaning, the whole rocket will probably need rebuilding, and if even a drop of water gets into the computers you can kiss them goodbye for good.

The days of drone platform landings are probably numbered (even before they fully begin). SpaceX has stated that they want to start returning the cores to land in the near future. They've even begun planning and construction of the first landing facilities.

Finally (as pointed out by Luggage in the comments) the fuel required to land on a floating platform is almost identical to that required to perform a splash landing. There would be some extremely minor increase in fuel consumption (probably measurable in 10s of litres) for the platform landing. The Falcon would have to modify it's velocity slightly to aim for a small target, rather than just landing anywhere in the ocean with the most efficient "go where the wind takes it" trajectory.

SpaceX were testing a 3-engine suicide burn with a booster they didn't plan to reuse, so they were landing on the sea rather than the droneship.

And, well, it wasn't destroyed on contact with the ocean:

The SRB and Falcon 9 first stage examples are very different.

The SRB is made of fairly heavy steel, considering that a burning SRB generates pressure throughout the body of the SRB. In fact to stop thrust, you pop the top off so that the thrust is equal in both directions.

The Falcon 9 first stage is an empty tin can, that is strong enough to hold itself up empty, but not much more. It gets pressurized somewhat during flight, to add strength to survive launch.

A 140 foot tall, 12 foot wide pop can, falling over in the ocean is not survivable.

The SRB also seems to enter heavy end first (engine) fairly quickly, submerges and bobs back up. The F9 first stage is not strong enough to do that.

Not the answer you're looking for? Browse other questions tagged spacex reuse falcon-9 or ask your own question.

0
Why can't the Falcon 9 first stage touch the water?
15
Why is it preferable for SpaceX to land their booster vertically rather than fly it down with wings?
4
Could a rocket first stage be rapidly reusable after landing in freshwater?

6
What is changing between the Merlin 1D engine and the uprated Merlin 1D+ engine?
12
Does the Falcon 9 (v1.1) first stage have an explosive Flight Termination System?
10
Could SpaceX start testing to return the Falcon 9 first stage to land instead of water?
9
Is it possible the Falcon Heavy Demo flight could be done with three previously flown boosters?
4
How far apart do both SpaceX half fairings splash down?
5
Why was the water-landed Falcon 9 B5-B1050 towed backwards for retrieval?
8
How much of the recovery system does Spacex remove from a Falcon 9 when using it in an expended manner?
14
Why do SpaceX expect the Falcon 9 rocket to explode during the in flight abort test?