Did CRS-6 landing fail because the steering fins are ineffective at low speed?

Images of the second attempt to land the first stage of the Falcon 9 on a barge, following its successful launch of CRS-6, show how it suddenly swung more than its cold gas engines could compensate for, as its rocket engine slowed it down. I would think that its tiny looking grid fins need high airspeed in order to provide stability. Near landing, airspeed suddenly gets slow and the fins become irrelevant. The stability of the rocket deteriorates.

Is this the root cause for the catastrophic instability just before landing, and is it a conceptual flaw of the entire concept of hover-slam for F9R? Wind speed looked pretty harmless, I think, from how the waves and smoke moved.

The root cause was a propellant valve for the Merlin engine that was slow to respond, so the engine had way too much power in the last few seconds. This results in the bottom of the stage having more lateral speed than it should, so it overshoots the vertical position.

The tweet referenced "biprop" (bi-propellant) and the only engine on the stage that qualifies for that is the Merlin. The thrusters at the top of the stage are cold gas (nitrogen), so monopropellant.

All this is based on a tweet by Elon Musk that has since been deleted. I hope SpaceX will publish a more detailed account at some point.

That controlled descent was successful, but about 10 seconds before landing, a valve controlling the rocket’s engine power (thrust) temporarily stopped responding to commands as quickly as it should have. As a result, it throttled down a few seconds later than commanded, and—with the rocket weighing about 67,000 lbs and traveling nearly 200 mph at this point—a few seconds can be a very long time. With the throttle essentially stuck on “high” and the engine firing longer than it was supposed to, the vehicle temporarily lost control and was unable to recover in time for landing, eventually tipping over.

Post-launch analysis has confirmed the throttle valve as the sole cause of this hard landing. The team has made changes to help prevent, and be able to rapidly recover from, similar issues for the next attempt, which will be on our next launch—the eighth Falcon 9 and Dragon cargo mission to the space station, currently scheduled for this Sunday (28 June 2015 - Hobbes).

That page also includes a longer video of the landing.

The confidence that current concept feasible and reliable enough to provide reusability is based on single precedent. That is Xombe experimental lander a vehicle with the same control arrangement but completely different size, dimensions and flight profile. Few key figures are common for two projects including Lars Blackmore is a SpaceX engineer involved in the very G-FOLD project. 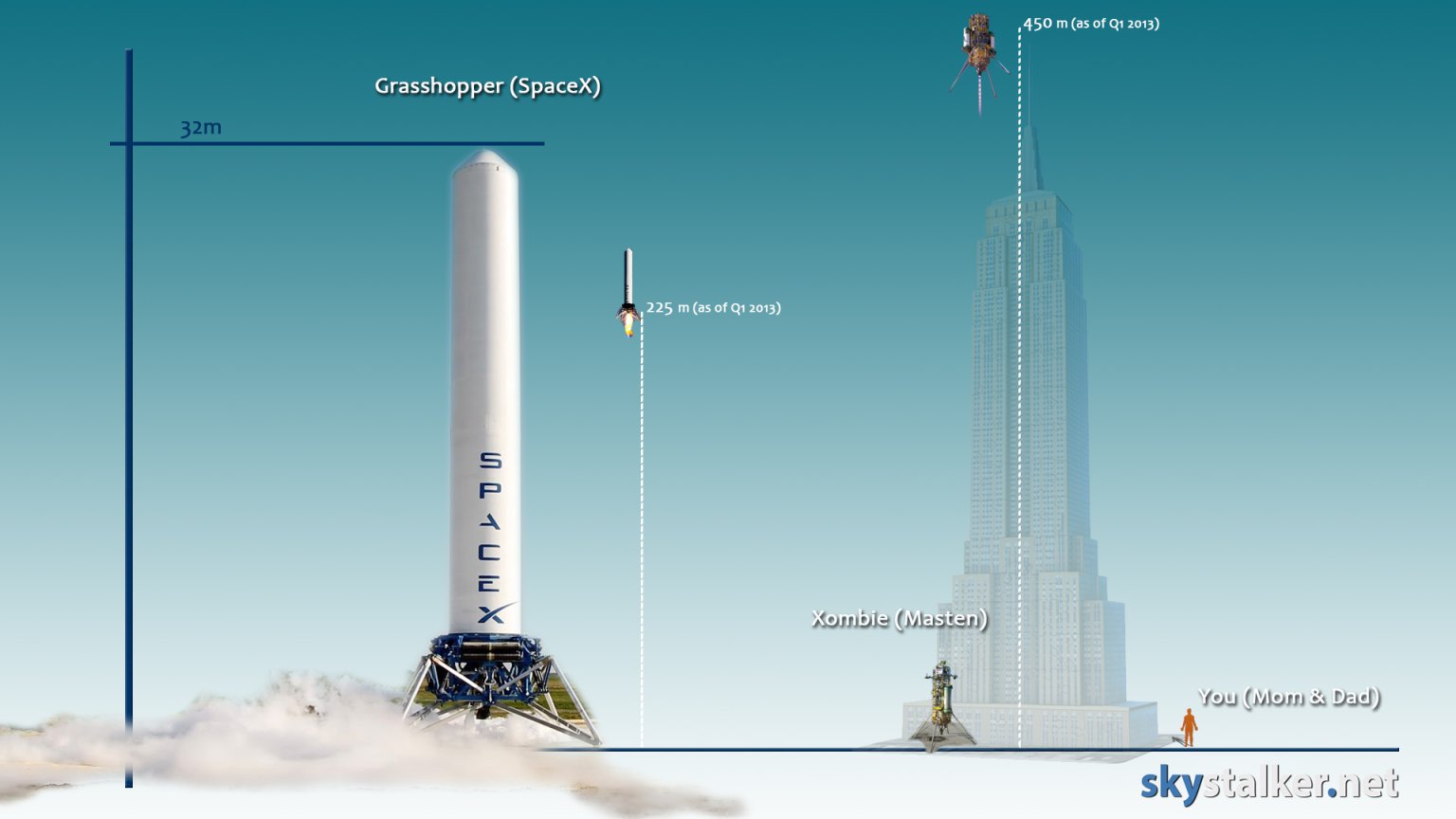 The root cause identified as a propellant valve lag is not an official report only a twit – a clear PR. Elon Musk is ingenious communicator he makes understandable explanations of everything. Form the other perspective the faulty hardware appear unusually frequently in experimental vehicles of SpaceX having in mind lack of such problems in highly successful Falcon 9 (as expendable LV). So the narrative about some valve lag should not be taken very serious.

So the answer would be: Yes, CRS-6 landing failed because of 'a conceptual flaw'. The lost of efficiency aerodynamic controls at low speed even is not root cause but contributed to repetitive problem.

Unfortunately, at terminal descent the efficiency any aerodynamic control surface diminish dramatically because of low airspeed (under 60 m/s they are inadequate). While aerodynamic controls had lost their efficiency, the aerodynamic disturbances caused by surface proximity – turbulence and wind gradient remain significant due the large platform area of the booster and legs deployed (ref picture). 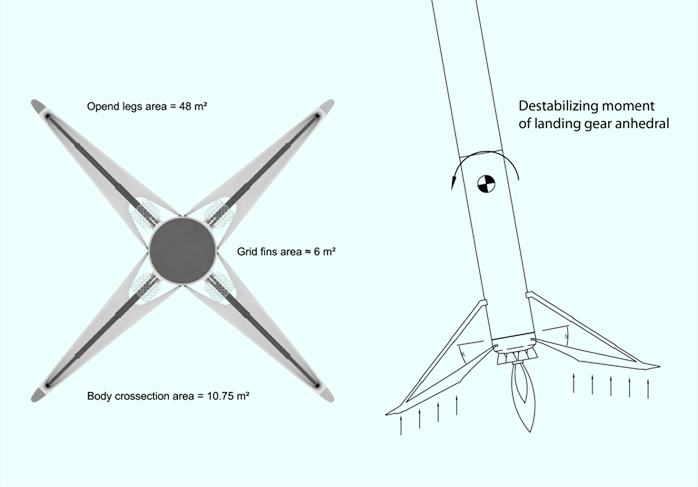 The graphs of angular movements tracked by Rhett Allain from 13 April crash video shows a classic pattern of dynamically unstable system – an oscillations with exponentially increasing amplitude. A very similar picture may be reconstructed from foggy night video of the first barge hard landing. 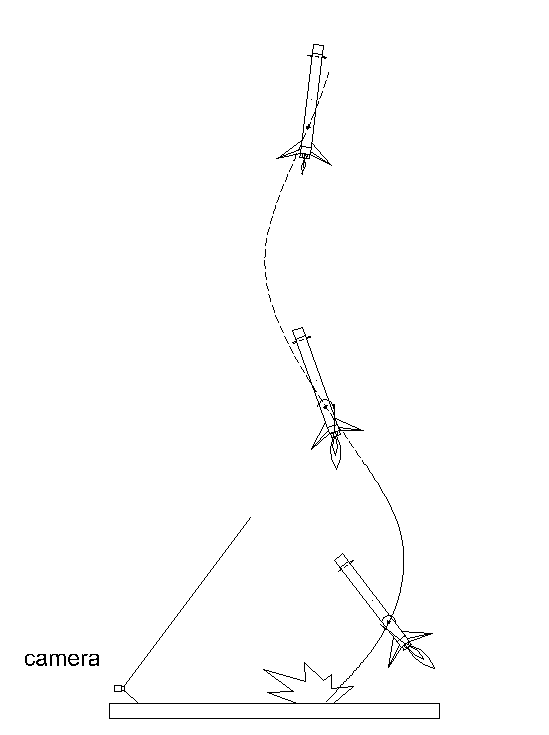 Well-tempered rocket The rocket flight control by single point vectoring the trust of its main engine have been developed prior WW II mainly by Goddard and Von Braun. One of problems of such arrangement is challenging requirement to maintain two variables (rotation and translation) by single effector (vectored trust). The metaphor of balancing a stick (in the middle of a wind storm) is in fact a physical model of the system. 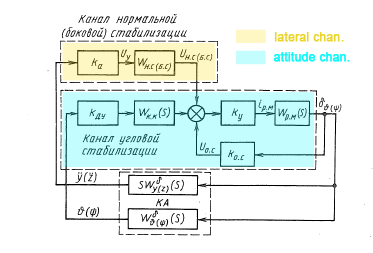 Acceptable solution was refined during the development of intercontinental missiles by applying of emerging those days automatic control theory . The basic on idea is to separate control channels by its frequency response. The attitude stabilization has priority and guidance system reacts faster to correct the angular position (high frequency). The lateral movements are corrected relatively slowly (low frequency) adjusting the flight path during the ascent progress. The modern flight computers apply adaptive and predictive algorithms to adjust guidance response during the changing flight conditions. Nevertheless, the basic principle remains the same.

A typical frequency responses of large ‘well-tuned’ rocket are shown in table below (flying normally upward). Note the slow reaction on center of mass movements.

Deadly vacillation The try to use the same trick flying the large rocket backward has limited success to the moment. It works mostly on light vehicles, out of the dense atmosphere, or flying slowly.

In contrast, of orbital launch, the pinpoint landing imposed a strict limitations on lateral drift. Thus, the lateral maneuvering became an ultimate priority and forced a faster response. Because of close frequency the lateral feedback interfere with the pitch/yaw channel. Figuratively speaking, the guidance computer is in vacillation between contradictive priorities: attitude stability and horizontal deviation.

Flying backward the rocket performed divert maneuver in a little pervert way - by purposely destabilizing the booster tilting it in desired direction and then erecting it back. That tricky maneuver inserts large swing what is hardly to dump by rocket optimized for very different flight profile.

Parallel parking problem Another problem of the vehicle trying landing back by same means using during the ascent is reversing the position of gimbaled trust controls. The controls become in front regarding flight detection during the descent. Steering characteristics are changed dramatically this way. Even fully predictable movement of a car is les versatile (and more stable) driving forward with front steering wheels. A parallel parking driving forward is simple analogy of what vertical takeoff vertical landing rocket is trying to do. The top of tall cylindrical body lag the guidance intentions due the aerodynamic dumping.

Back to sixties Contemporary launch vehicles are strictly optimized for axial stress at vertical launch. Although any attempt to use a system developed and refined for specific purpose (vertical ascent) for completely different one (vertical descent) will certainly confront once more the basic problems already solved during primary use development. To enable for pinpoint vertical landing the rockets designed to fly against target or to launch a spacecrafts will need to rethink and possibly re-solve the basic problems of propulsive flight to meet the new emerged requirements.

Reference: 1. An article on G-FOLD project. You can find how the single ended control works on practice. FLIGHT TESTING OF TRAJECTORIES COMPUTED BY G-FOLD: FUEL OPTIMAL LARGE DIVERT GUIDANCE ALGORITHM FOR PLANETARY LANDING

Not the answer you're looking for? Browse other questions tagged reuse falcon-9 propulsive-deceleration or ask your own question.

15
How effective are Falcon 9 1st stage grid fins in the last few seconds before landing?

9
Are the Falcon 9 landing legs aerodynamic surfaces as well?
9
Will we see the barge landing live during the SpaceX CRS-5 webcast?
9
How close did the landed first stage of the Falcon 9 get to the X on the landing pad?
18
SpaceX first stage landing: Why not use an elevated net above the landing platform to catch the rocket?
15
How effective are Falcon 9 1st stage grid fins in the last few seconds before landing?
5
Did the Thaicomm-8 SpaceX landed first stage move after landing?
29
Did the Challenger SRBs fail due to design for reuse?
22
Why did the grid fin of the CRS-8/SES 10 booster burn?
4
I don't understand the speed readings for stage 1 on CRS-12
8
Why did the Falcon Heavy core engines fail to reignite?