The Wikipedia article mentions that NASA's Boeing 747 Shuttle Carrier Aircraft (SCA 747) have the upstairs first class seating, and the rest of the plane was stripped bare. It doesn't mention anything going into the main fuselage, I'm guessing because nothing did go in. But is there anything?

Given the limited fuel range of N911, I would wonder why the fuel tank wasn't expanded (too heavy, I presume).

Bonus - why the heck is the plane escorted by unarmed FA18s when it has the orbiter on its back? Can't it be escorted by anything else unarmed? Or are they sometimes armed?

Answer: not much. Here is a photo I took looking aft inside of the 747. 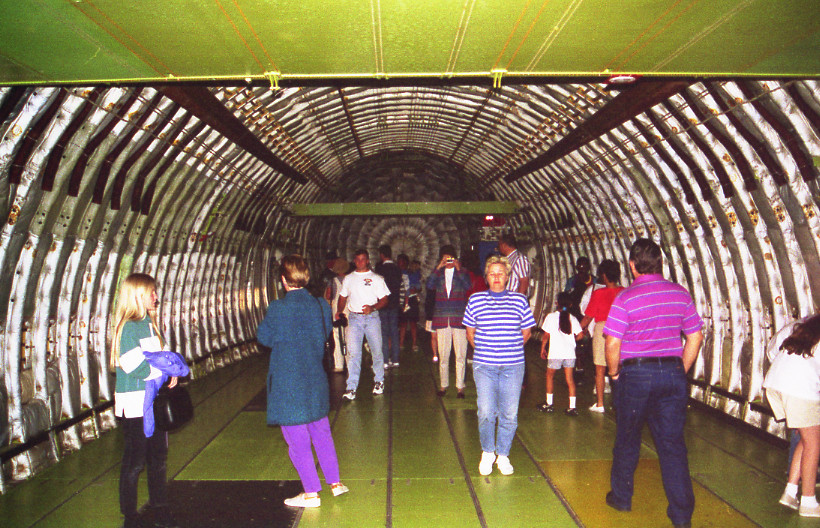 Here is another just below the hard points. Ignore the silly people. ;) 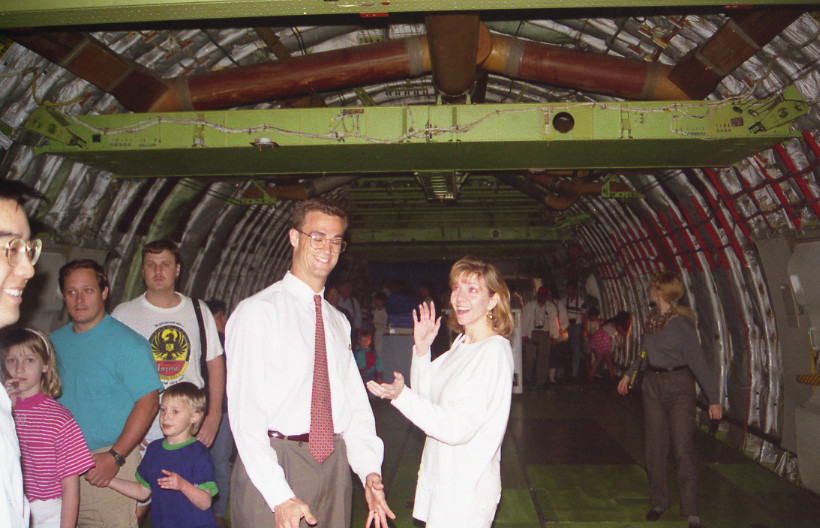 Given the limited fuel range of N911, I would wonder why the fuel tank wasn't expanded

From the Shuttle Ferry Flight blog:

...the SCA has a very limited range when ferrying the Orbiter. That range depends primarily on the weight of the Orbiter and the air temperature. Winds are also a factor. The heavier the Orbiter is, the less fuel we can load into the SCA, pure and simple.

This despite @RusselBorogrove's note that the Shuttle dry weight is below the the 747-100's payload capacity.
The Shuttle was above its dry weight during (at least some) ferry flights. After landing, they did not remove all remaining cargo, empty the fuel tanks etc. before it was ferried back.
The SCA was also modified: its fuselage was strengthened, increasing its weight and reducing its payload.
They were close enough to the weight limit that adding more fuel wasn't an option. In fact, they couldn't even use all the standard fuel tanks.

In the words of one of the flight engineers on the SCA:

There are four main, one center wing, and two reserve tanks. We normally only use fuel out of the mains and reserves. We don’t use fuel out of center wing mainly because the Orbiter just takes up too much weight. The airplane can only weigh 710,000 pounds at takeoff. So with a 200-and-something-thousand-pound Orbiter we can’t put a full load of fuel on. So we never get fuel in the center because you make it too heavy.

Finally, places like Edwards are at higher altitudes which decreases performance.

As for your bonus question: NASA operates four Navy surplus F/A-18s as chase/observation planes for test flights. They're unarmed and demilitarized; if for some reason the SCA needed an armed escort, they'd get it from USAF or USN.

In addition to those F/A-18s, NASA has historically used T-38s and F-104s in this role -- they still have T-38s and still use them to maintain pilot proficiency training for astronauts, as they've done since 1962! For a chase plane that has to keep up with the sometimes unusual trajectories or performance envelopes of research aircraft (which NASA flies a lot of), you want something fairly fast and nimble -- a jet fighter or fighter-trainer. Two-seaters have obvious advantages there, and two of the '18s are 2-seat.

According to the NASA page on the Shuttle Carrier Aircraft, pig iron and pea gravel were loaded inside to balance the aircraft:

"You see, the nearly 2 tons (1710 pounds) of pig iron up-front in the former first class section of the aircraft, and the 3.5 tons (7000 pounds) of pea gravel in the cargo hold are for keeping the aircraft’s center of gravity forward when a heavy Shuttle is mounted on top," says Seidl.

All aircraft need to be balanced, and keeping their center of gravity in the right place is key. Without the gravel and iron, the tail-heavy Shuttles, made so by their rocket engines, could cause the 747s to experience flight instability. So, the gravel and iron provide much-needed weight toward the noses of the 747s to balance out the problem.

So not only did the SCA have to carry the heavy shuttle, but additional weight as ballast. No wonder why the fuel range of the SCA was horrible!

Not the answer you're looking for? Browse other questions tagged nasa space-shuttle transport shuttle-carrier-aircraft or ask your own question.