Why isn’t the “JRTI” barge larger?

The barge that SpaceX's Falcon 9 was trying to land on is creatively called "Just Read The Instructions"(hereafter known as JRTI). 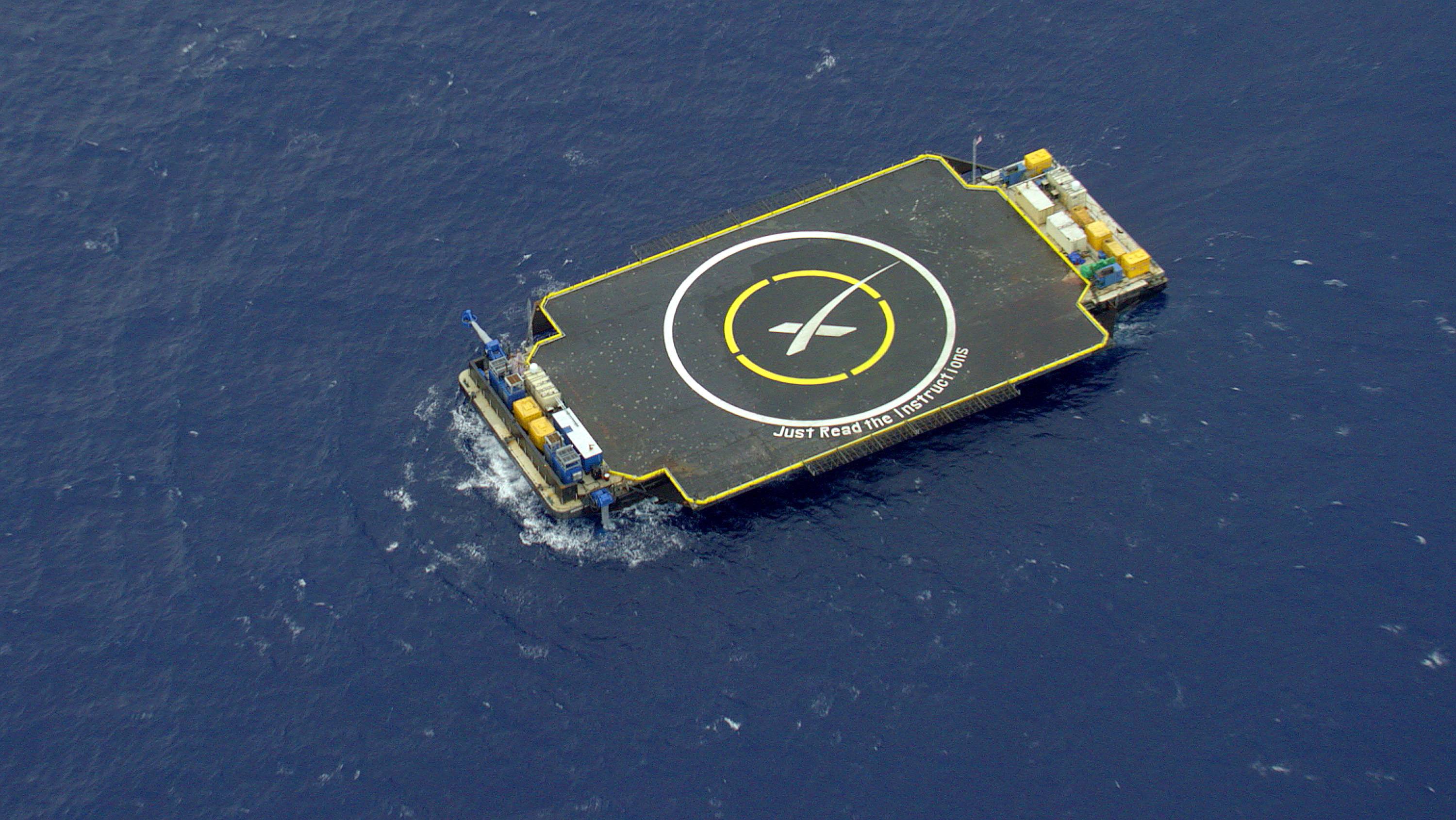 I've been told that SpaceX is using the barge to avoid a land based landing (aka a "landing") near a populated area - totally makes sense given the videos I've seen.

Why isn't it larger? Sure it would be expensive, but Falcon 9s aren't cheap either...

Edit: I've played Kerbal Space Program and know that landing accurately is difficult, even under power, but a suicide burn like this is... well suicide (rocketcide).

I bet that's every rookie US Navy pilot's thought too on their first carrier landing approach. Thing is though, that unlike aircraft, Falcon 9 first stage can't really maintain altitude before landing. Even single of its nine Merlin engines throttled all the way down is too powerful for hovering on nearly empty tanks and landing is really going to be more of a Slam Dunk (a combination of Top Gun Arrival and Let Gravity Do It spot landing techniques). There's only a small area where you're either getting it right, or you're not getting it right at all, regardless of the size of the landing area.

Once you realize that, it's not difficult to come to the conclusion that a larger drone ship not only wouldn't solve anything, it would create additional problems. One of its main functions is to provide a stable surface to land on. On the sea, the bigger surface you have to stabilize, the more difficult it will get to do that. You'll need a lot more oomph in those stabilizers, more of them, and they'll fail more often. To Just Read The instructions ASDS (Autonomous Spaceport Drone Ship), or BargeX if you want, it already happened once before that one of her stabilizers didn't function correctly, albeit Elon Musk said that wouldn't have been the problem then.

There would be also other problems with a larger drone ship, like being more costly to maintain, it would be heavier and probably slower and more difficult to maneuver, and so on. But those are not as important. What's important is that larger size, in this case, wouldn't solve anything.

This simply is not the case. SpaceX has stated that the rocket was trying to compensate for a slower-than-expected throttle response. They know what the problem is, and they very likely know how to address the problem. The target is plenty big enough, as evidenced by the fact that they can reliably hit it.

Their eventual goal is to "land" on land anyway. For that, they need FAA clearance, and in order to get that, they don't need to prove that they can "land", only that they can kinda-sorta crash into the landing site in such a way that the explosion doesn't harm anyone else than them.

Which they have already done with the current barge system.

SpaceX has a number of problems they need to resolve.

Surviving re-entry with a first stage, finding a target to land on. Controlling it all the way down.

The last step is actually landing it. The ultimate goal is to do it on land, but they need to prove to the FAA that they are safe to come in over land.

The fact that they have hit the JRTI twice (literally) is pretty good proof that they can hit a small target from almost orbit. (Edit from 2017 - they have since landed over a dozen times, split between both ASDS barges and the LZ-1 pad on land).

If they trash their own landing pad, that is kind of their problem. If they hit anything else on the way down, that is the FAA's problem.

Thus JRTI has served well. They still want to keep it for later landings for missions where the payload requirements mean not enough propellant margin for boostback to the landing site. Downrange landings. Especially for Falcon Heavy since the side boosters will usually have enough propellant margin to return to launch site, but the core booster wants to go higher and faster, so coming back is harder and more expensive in payload reduction. So landing downrange means recovering the stage vs not recovering it at all.

They are building the "Of Course I Still Love You" ASDS for the West Coast launches for the same reason. (Edit from 2017: In the end, JRTI's wings were removed, placed on top of a different Marmac barge, and taken through the Panama Canal to be the West Coast barge, and a new ASDS, OCISLY took over Atlantic duties).

They now just have to fix the issues with landing, which they think they have in hand. So a bigger deck would not really help much.

Looking back at this answer a couple of years, and 15 landings later, it seems like they have no trouble landing within the outer circle, let alone actually hitting the X. So turns out the size is just about correct.

SpaceX have already proved very accurate spot landings can be achieved with their Grasshopper. Their next step is to prove it can be done with a vehicle that can't hover, and that sort of vertically timed landing doesn't really need a pad of a certain size; just good control over vertical speed (especially deceleration).

So, the size of the barge is pretty much irrelevant.

The basic answer is, as others have said, JRtI doesn't need to be larger. SpaceX can find it, reach it, and put the stage engines down on it. The fact that their already highly-successful recovery tests have not yet quite delivered an intact stage is not a problem.

I'm answering mostly to respond to the idea that the technique chosen is a "suicide burn". Not so. The approach speed chosen is the only one possible. As soon as the landing engine is running, acceleration is inevitably upwards, and only fine computer timing of the throttle setting allows the downward velocity to reach zero at the same moment that the stage reaches the landing height. If the engine continued running after the stage stopped descending, even at lowest possible throttle, the stage would be into accelerating ascent. Essentially throttle control is continuously adjusting the bottom of a near-parabolic curve with the aim that the minimum is at h=0 (while leaving throttle margin either side to cope with the unexpected).

What SpaceX needs to do is to perfect its procedures for landings on a sea barge and then to practice, practice, … practice. That requires time and money, something that commercial operators are always short of because they are always thinking about return on investment.

Of all the Apollo lunar mission commanders only one was an ex air force pilot (David Scott, Apollo 15), all the others were ex navy pilots. Navy pilots are experienced at placing flying objects onto small targets at sea and all navies with aircraft carriers have perfected their procedures for this.

SpaceX just needs expertise and lots of practice at landing on a barge.

I don't believe that SpaceX needs practice at anything that has to do with landing at sea or on a barge. They need to fully understand the forces on the rocket at and near the point of landing. The barge is responsible for positioning and vertical movement entirely independently of the rocket. Windage and velocity control as well as vertical control of the angle of incidence is a separate but related issue again having nothing to do with landing at sea. From what I could see, the dry landing zone was no larger than the barges.

Not the answer you're looking for? Browse other questions tagged spacex falcon-9 landing reuse asds or ask your own question.

8
How will the SpaceX landing barge (ASDS) get to the proper location?
34
Why did SpaceX attempt to land the booster on a barge instead of somewhere on land?
25
How does the Falcon 9 know where the landing barge/pad is?
9
Did CRS-6 landing fail because the steering fins are ineffective at low speed?
13
What is the SpaceX barge topped with?
29
What started the explosion on the crashed Jason-3 stage landing on the barge?
15
What is the cause of this Falcon 9 first stage "dance" after landing?
13
Why did the Falcon Heavy center core fall off the ASDS OCISLY barge?