How good does the weather have to be for a rocket launch?

I'm watching a launch sit on hold because the sky is overcast. The announced hold reason was "thick cloud cover, anvil cloud". So they have a checklist. What is on that checklist? How do they assess that checklist - for instance, how far away does an anvil cloud have to be for them to consider conditions a go? In this launch, they are aiming for a gap in the conditions that they are calculating to arrive at a particular time, and adjusting the countdown accordingly. They must be looking at the radar and judging when the cloud cover and surrounding clouds will fall within acceptable parameters.

As discussed in the related questions TildalWave posted in a comment it really depends on the rocket (because I have it here's an article about a Soyuz launch in a snowstorm) and what the range they're launching from supports.

Considering you asked on April 27th you were probably watching the SpaceX TurkmenÄlem52E/MonacoSat (Thales) launch. For that specific launch I found this screenshot of the launch commit criteria: 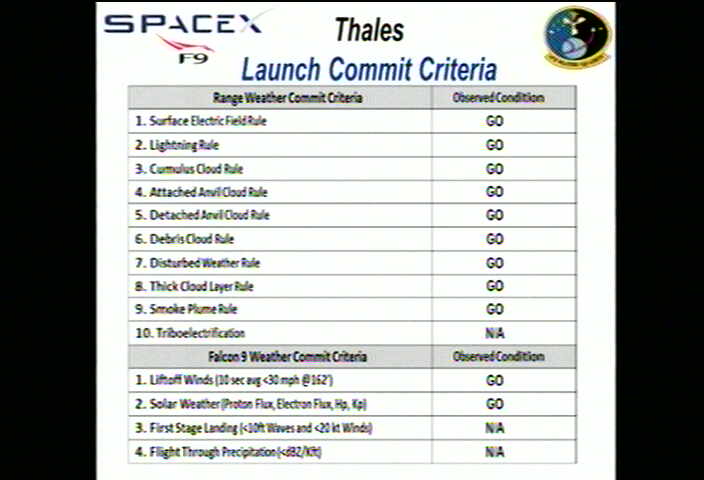 Note that the checklist breaks it down into separate groups for the range and the Falcon 9, this wikipedia page provides more detail but doesn't give any such separation. On the other hand, the wikipedia page is sourced from this NASA document which only includes the Liftoff Winds rule from the Falcon 9 specific criteria and otherwise appears to match the range criteria. Also, if I remember correctly the first stage landing criteria was a nice to have, not a requirement to launch (maybe why it's marked as N/A).

To quote wikipedia (since it's better formatted for copying text out of than the NASA pdf), the Falcon 9 cannot be launched under the following conditions:

The following should delay launch:

This is a hard question to answer generally (without just resorting to "it depends), but if you're interested in other rockets the wikipedia link above also includes criteria for Atlas V and the Space Shuttle.

Not the answer you're looking for? Browse other questions tagged launch rockets launch-sequence weather or ask your own question.

21
Why are rocket launches so sensitive to weather?
22
Can a rocket be launched while it rains?

111
What is the purpose of having a countdown during a rocket launch?
21
Why are rocket launches so sensitive to weather?
12
How does a rocket navigate during launch?
5
What are the main steps in the lead-up to a rocket launch?
3
How do the launch controller headsets work?
0
Good source for launch videos
9
Do smaller rockets require better weather at launch than larger ones?
8
How much does pressure on Mars change with weather?
5
Have weather satellites been sent to other planets?